One of the most pressing issues of our day is the wholesale persecution of Christians. As has often been pointed out, more Christians have died for their faith over the past century than throughout two millennia of church history. And much of this persecution and death comes from political Islam.

Yet few governments are talking about this or taking it seriously. Thankfully there was a recent exception to this, when participants from 32 countries attended a two-day conference in Budapest. It was held on October 11-13 this year and called, “International Conference on the Persecution of Christians – Seeking Answers to a Long-neglected Crisis”. 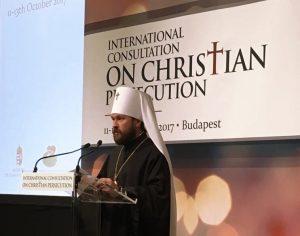 It was hosted by Hungary’s Deputy State Secretariat for the Aid of Persecuted Christians within the Ministry of Human Capacities. The result of this meeting was the Budapest Declaration. This important document raises attention to this Christian persecution and calls on governments to act on it.

The 13 points of the Budapest Declaration are well worth sharing here:

The participants of the conference

(1) Express their deepest solidarity towards those Christian and other religious minorities around the world that are being persecuted.

(2) Welcome and support all efforts by governments, church and non-governmental organisations whose aim is to raise their voices in the name of the persecuted religious minorities of the world, with particular emphasis on Christians.

(3) Recognise the Hungarian government’s actions in support of persecuted Christians and other religious minorities, as well as the similar actions of other governments.

(4) Condemn any action aimed at denying or curtailing the free exercising of basic human rights, with particular emphasis on violations of religious freedom.

(6) Emphasise that the barbarian acts committed by the terrorist organisation calling itself the Islamic State, or any other similar terrorist organisations or militias, amount to crimes against humanity and war crimes, and accordingly all countries of the world must act in order to stop these criminal activities and bring to justice the persons responsible for them.

(7) Support the role of the special envoy in reinforcing freedom of religion and belief outside the European Union.

(8) Call upon the European Union to revise the effectiveness of restrictive measures and amend them taking into account the interests of the civilian populations of the countries involved.

(9) Call upon the world’s political decision-makers and influencers of public opinion to promote the free exercise of religion in the crisis areas where Christians and other religious minorities are being persecuted, in order to ensure international freedom and security, with particular emphasis on certain regions of the Middle East, Africa and Asia.

(10) Call upon the world’s governments and international organisations to seek long-term solutions in order to end the persecution of Christians and other religious minorities, and to ensure the exercising of all human rights, included that of the free exercising of religion in accordance with Article 18 of the Universal Declaration of Human Rights.

(11) Call for the urgent reconstruction of schools and other infrastructures, in order to allow Christians and other persecuted religious minorities to remain or return to their ancestral lands.

(12) Call for the support of political, economic and security solutions that will allow Christians or refugees belonging to other religious minorities to return to their home countries.

(13) Urge common action on behalf of the world’s governments and international organisations to end atrocities against Christians and other religious minorities, and to implement immediate and concrete measures in accordance with that goal.

This is a much-needed declaration and it is hoped that governments around the world will take it seriously. Indeed, I notice at least two recent initiatives since this conference was held, and they offer an encouraging way ahead. In the UK a symbolic gesture is taking place today:

On 22 November, churches and public buildings around the world, including the houses of the British Parliament, will be lit up in red as a sign of solidarity with persecuted Christians across the globe.
Numerous studies have shown that Christians are by far the most persecuted religious group in the world, with some 90,000 Christians killed for their faith in 2016 alone, while as many as 600 million were prevented from practicing their faith.
The event known as #RedWednesday calls attention to the plight of Christians in hostile situations around the globe by using the color red to evoke the notion of Christian martyrdom. Aid to the Church in Need (ACN), a Catholic organization that assists persecuted Christians, has organized the event in conjunction with Christian Solidarity Worldwide (CSW).
According to ACN, the rights of people of faith are “largely ignored in a society whose secular focus knows little about religion and cares even less.” A 2015 report found that Christians suffer widespread discrimination and ridicule even in the United Kingdom.
For this second annual #REDWEDNESDAY, organizers are inviting people to show their solidarity by wearing red, lighting buildings or landmarks red and holding peaceful prayer events.

And in the US, the Vice-President spoke out on this hugely pressing issue:

Vice President Mike Pence delivered the keynote address Wednesday night at the In Defense of Christians (IDC) annual summit, and brought a message of solidarity and hope for the persecuted Christians of the Middle East. “The Bible tells us that all who desire to live a godly life through Christ Jesus will be persecuted,” Pence said. “Sadly, today, Christianity is under unprecedented assault in the ancient land where it first grew.”
“Tonight, I came to tell you help is on the way. President Trump and I and our entire administration are working tirelessly to protect these ancient communities,” he added. Christians and religious minorities have endured ongoing torture in the Middle East, actions the Trump administration calls by name: genocide.
“They are genocide. They are crimes against humanity and we will call them what they are,” Pence said. The vice president also didn’t shy away calling the force behind the violence by name.
“President Trump and I see these crimes for what they are: vile acts of persecution animated by hatred for Christians and the gospel of Christ. And so too does this president know who and what has perpetrated these crimes and he calls them by name: radical Islamic terrorism,” Pence said.

All this is a good start on a long-term and widespread problem. Much more of course needs to be done. But Christians worldwide will applaud what took place in Hungary recently, and I look forward to seeing the principles enunciated in the Budapest Declaration seriously acted upon.

Please share this document far and wide. And, at the very least, keep the persecuted church in your prayers.

6 Replies to “The Budapest Declaration”