There is nothing new about pain and suffering, and why God’s people have to endure so much of it. Job wrestled with these matters three millennia ago, and we still do today. There are no easy answers, but there are always plenty of questions.

Suffering comes in many forms, but some of the most difficult has to do with dealing with a loved one as they go through deep pain and suffering. When a family member for example goes through such periods, there is a doubling of the grief: their pain and your pain as you struggle through it together.

Many books have been written by those who have gone through such heart-crushing and soul-numbing suffering, and I have reviewed many of them here. This new volume is well worth adding to the collection. It is more a series of thoughts, reflections and insights than any sort of systematic treatise.

It concerns a seminary professor whose beloved wife has been struck down with a form of dementia. Doug met Becky in 1983. They fell in love and married a year later. She was a terrific soul mate, especially intellectually. She could help keep this philosophy professor and apologist on his intellectual toes. 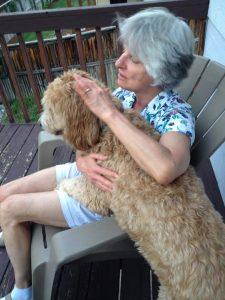 She edited his books and sharpened him mentally and spiritually. But over the past four or five years Doug’s wife has developed a form of dementia, throwing both their worlds upside down. Now she can do little of what they both had enjoyed doing together.

She used to be an author and speaker in her own right, but now she cannot read, write or do the simplest of tasks, such as putting on her shoes. And her condition is worsening, with no cure for her ailment. So now Doug seeks to continue his teaching, writing and speaking activities, but is also a fulltime caregiver.

Others come in and help, but the main responsibility falls on him. It is hard – very hard – on both of them. With a half a decade of this, some of his thoughts and meditations are now in book form – somewhat therapeutic for him, and hopefully of real help to others.

While we each suffer separately, we also all share a common humanity, so the comfort and insights one gets in intense suffering can be offered to others, and be of some use. In all this there are of course no easy answers. Glib responses and clichés – even really “spiritual” ones – help no one here.

For the Christian, one can only hope to be drawn closer to Christ, known as the Suffering Servant. Groothuis reminds us that the word ‘excruciating’ means to take on a cross: “It was invented as a reflection on the passion of Jesus. If we take the cross of Christ, we can become a bit more like Christ, more aware of others’ suffering, and more willing to listen and help.”

During such suffering, life really does become radically different. For the believer, the laments of Scripture take on new meaning for example. The words of past sufferers now become so real, even palpable. Life is now looked at in a whole new light.

Impending death is said to wonderfully concentrate the mind, and persistent suffering sure can help us reacquaint ourselves with reality. All the games and trivial pursuits fade away as we come to grips with the pain and grief. And the response can be twofold – we either become bitter or better.

Many believers of course simply give up, turn their backs on God, accuse him of all manner of things, and spend the rest of their lives in anger and bitterness. Suicide also becomes an option for such folks. They have lost any sense of hope because they have given up on the only one who can provide hope.

Doug was tempted by the former option of bitterness: he had to deal with anger, even with bouts of hatred toward God. But like the apostle Peter he had to ask, ‘Who can we turn to but you?’ And as an apologist, philosopher and ethicist, he already had plenty of all the right answers stored away.

But getting what is in one’s head into one’s soul during these deeply dark times is the real issue. That is something all Christians must learn. We all have so much head knowledge, but how much of it is real, experiential knowledge? Indeed, did we ever have a real and vital faith prior to suffering?

Such times of testing certainly bring these matters to the fore. For me, this volume was helpful on so many levels, in large measure because I identify with the author in so many areas. I have most of his books and have enjoyed them thoroughly.

I have even chatted with him on the social media a bit. We are roughly the same age, and I too love what he loves. I also very much relish apologetics, philosophy, ethics, reading, writing and teaching. I too married a gal who impressed me – among other things – because of her intellect.

Believe it or not, she actually reads MORE than I do. She too often helps edit my work. She too has done all the financial work at home. So I sometimes selfishly wonder how I would cope if she moves on – I would not even know how to pay the bills.

She did have a hip replacement a while back, so I came to know a bit about being a caregiver. And as we both age, we both will be called upon to do this much more. But that was a temporary situation. The dementia Becky has is not curable, and things will not get better.

Thus despite plenty of prayer, fasting, visits to specialists and Christian carers, and everything else one does in these situations, Doug is now resigned to the fact that she is not going to improve. He notes how Catherine Marshall spoke about the need for a “prayer of relinquishment”.

“The act of giving up,” he writes, “frees up possibilities, even though you must accept the unacceptable.” He reminds us that the supreme act of surrender and relinquishment was when Jesus offered up his life to the Father:

The man who cast out demons with a word, who caused the cripple to dance with joy, who made the blind man see, who gave the widow back her dead son, this man must die – not after a long life, as with Moses, but in his earthly prime. Jesus submitted when he could have escaped. Yes, I gave up any hope for Becky’s healing or for any amelioration of her disease. I would have to manage her decline, day by darkening day. But God has not given up on us, although that often seemed true.

This hope must sustain the burdened soul. And burdened these souls are, in the case of Doug and Becky Groothuis. The release is not quickly coming. It can be for some. For example, “David lost his son quickly. There is nothing quick about the decline demanded by dementia. Time slows down as the misery speeds up.”

In the meantime, Doug must heed what Paul said in Colossians 4:17: “See to it that you complete the ministry you have received in the Lord.” Thus he will still write, and teach, and preach. But he will also keep being the caregiver Becky needs him to be, until….

Writing down what one is going through is never pleasant, but we can all be grateful that Doug did this. It can help the one who is suffering, but hopefully it can provide comfort and relief for others as well. It has provided that to me, and I believe it will do so for many others.

Thanks Doug. Bless you and Becky.

13 Replies to “A Review of Walking Through Twilight. By Doug Groothuis.”