And she ought to know, since she knows a fair amount about both religions. She was an Egyptian Muslim for the first 30 years of her life, living in Gaza for part of that time. She has since been a Christian living in America for nearly 40 years. In books, articles and talks she has long been warning the West about Islam and creeping sharia, and her voice needs to be heard.

This is her fourth book, and they are all essential reading. See for example my review of her second book: billmuehlenberg.com/2009/06/24/a-review-of-cruel-and-unusual-punishment-by-nonie-darwish/ 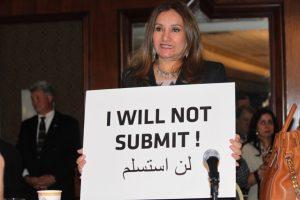 For those who know little about both faiths, if they simply read this new volume by Darwish they would have a wealth of information as to why one can never conflate the two. At every level, they are as different as you can get. Every page is full of facts and information highlighting the many differences.

Before I list some of these major differences, let me point out that the usual charges of “Islamophobia” are simply out of place here. Says Darwish, “My critique is not a critique of human beings, but of a toxic ideology I lived under and escaped from.”

Her opening words make clear why we must know the truth about Islam: “Islam’s moral values are diametrically opposed to biblical moral values.” That is why attempts to reconcile Islam with Christianity have always failed. And this is all one-way traffic anyway: “How many interfaith dialogue groups do you think exist in any Muslim-majority country?”

And her own personal story is so very valuable here. The contrasts are as numerous as they are profound. As she says early on, “I have no childhood memories of being happy or being around happy people. Being happy and joyful was never a value in Islamic culture. Muhammad never said that he came to set us free, give us joy, or heal us from sin like Jesus did. On the contrary, happiness and good news were often concealed from people.”

The subtitle of her book is “Why I chose biblical values over Islamic values,” so let’s begin by looking at some of the many contrasts here. Consider the issue of core religious aims. In Christianity the goal is to share the love of God with others, point people to a loving saviour, and set them free from their sins and bondages.

The Koran never speaks of God loving all of humanity. In Islam submission to sharia law and the destruction of all competing faiths is the goal. Islam means to submit, and the devout Muslim must not only live under sharia but seek to spread it worldwide. Related to this is the issue of freedom.

Freedom of religion and conscience are core components of the Christian faith, but not Islam. Those who dare to leave Islam are considered to be apostates and subject to the death penalty. “Islam needs ‘compulsion in religion’ to succeed. It is not adequate to compete with the Bible, and Muslims feel its inadequacy.”

Things like freedom, democracy and human rights have all developed in the Christian West. Islamic countries do not see these as values to be strived for, but instead promote conquest and submission: “The Bible is a bulwark protecting us from tyranny of man on man and government on citizen, but Islam came to reinstate the enslavement of man to man and individuals to their rulers.”

As to more personal religious ethics, God’s love and the ability to have a personal relationship with him are key aspects of Christianity. In Islam, Allah sees most people – all non-Muslims – as enemies. Indeed, the majority of verses in the Koran deal with the kafir, and Allah’s hatred of non-Muslims is “the most prominent feature in the Koran”.

The Sixth Commandment tells Jews and Christians not to murder. But here it is that “Muhammad’s reversal of Biblical values becomes crystal clear. . . . Commandments to kill and terrorize are in abundant supply in the Koran, hadiths, and sharia…. Those who murder under the title of holy jihad are honoured.” In sum, the ‘love your neighbour’ of Christianity is replaced by ‘kill your neighbour’ in Islam.

Muslims of course never see Allah as father. The relationship of God to people is more like a master-slave relationship. “Abdullah, meaning slave of Allah, is one of the most popular names for Muslims. And that is exactly how Muslims relate to Allah, as a far and distant God, angry, vengeful, and eager to punish.”

Consider how women fare in Islam. Men can have four wives, but the woman can have only one husband. Divorce can only be initiated by the man. Women get half the inheritance that men do. A husband has a right to beat his wife. Husbands have no obligation to support their wives if they are considered to be rebellious.

A woman’s testimony in court is half that of a man. Sex slaves are permitted in Islam. To prove rape, a woman must have four male witnesses. Honour, not love, is the central concept in the Islamic home. Men are commanded to withhold love and friendship from family members who are not Muslims. Any violation of Islamic values can be punished by honour killings.

“Islamic laws promote the sadistic repression of women, depriving them of their humanity and dignity, and keeping them from being heard or seen. . . . The difference between the status of women within the family in Islam and in the Bible is like night and day.”

And even mistreatment of animals is a basic feature of Islam. Dogs of course are considered to be unclean in Islam, and this leads to a general inhumane treatment of animals. The whole culture is desensitised to animal cruelty, and few Muslims are bothered by it.

I have personally witnessed horrific cruelty to dogs, cats, pigs, and donkeys in the Muslim world. There are hundreds of heartbreaking YouTube videos of dogs, donkeys, and other animals being pushed off cliffs, tortured, whipped, and set on fire, all in Islamic countries. This terrible abuse goes unpunished in many areas of the Muslim world. It was in America that I was blessed with understanding and appreciating the love of animals.

All this is just scratching the surface of what Darwish presents in this volume. And of course plenty of references and quotes from the Koran, the hadiths, and current Islamic leadership are provided along the way. Islam and Christianity are worlds apart. And all this has very real life and death consequences.

She concludes with these words:

Islam can only be as powerful as Western governments and citizens allow it to be—and their appeasement is making it very powerful. A huge storm of Islamic darkness is sweeping across our planet today. Let us never take our Biblical values for granted or think that we could maintain Western morality while rejecting “In God We Trust,” Biblically-based education, and the Ten Commandments. Our hope is the revival of Biblical values, our joy is in the Lord, and holding on to our Bible. It’s all we’ve got.

8 Replies to “A review of Wholly Different. By Nonie Darwish.”