For those few ferociously faithful followers of this website, you may have noticed that things have been a bit quiet here for the past few days. That is because I have been rather busy, and the main thing occupying my attention has been devouring 1200 pages of an inspiring and captivating biography.

Yes, it took me quite a while, but I finally bought the superlative 2-volume biography of George Whitefield by Arnold Dallimore (Banner of Truth). After twenty years of painstaking research, volume 1 was released in 1970. Another decade of research saw volume 2 making its appearance in 1980.

At 600 pages each, the two volumes are a rich, detailed and thorough look at one of the greatest preachers and revivalists of the Christian church. For those who know nothing about the man – and you all should k 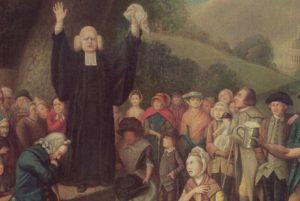 now about him – see my writeup here: billmuehlenberg.com/2015/03/31/notable-christians-george-whitefield/

There is just so much that a Christian today can relate to, learn from, and be moved by in this great biography. In so many ways I found myself identifying with what Whitefield was going through, including so many of his trials, heartaches, conflicts and tribulations.

Numerous lessons can be pointed to, but I can only highlight a few of them here. Another article or two will be needed to deal with some of the other important lessons.

Whenever a wonderful work of God is under way, you can be sure the ugly opposing work of Satan will be there. One of the dominant themes found in this work is the extent and enormity of the relentless opposition – from friend and foe, men and devils, believers and non-believers.

The more God used Whitefield and the other revivalists, the more opposition and resistance they faced. Plenty of it was outright diabolical hatred and fury. Physical violence was faced by all the major preachers. Consider one of Whitefield’s diligent co-workers, Howell Harris. He was actually doing open air preaching some years before Whitefield, and then the Wesleys. Dallimore says this:

Harris’s mother treated him with bitter scorn and his brother Joseph wrote to him as though he were mentally deranged. Magistrates threatened to throw him in jail and warned that heavy fines would be imposed against all persons who allowed him to minister in their houses. Some of the people, infuriated by his condemnations, became violent against him, seeking to do him bodily harm.

On one occasion in 1741 for example he was set upon by a raging mob, attacked with fists and clubs, leaving him covered in blood: “The enemy continued to persecute him… striking him with sticks and staves, until overcome with exhaustion he fell to the ground… They still abused him, though prostrate…”

Now that is persecution. But what is even more appalling is this: these attacks were often instigated by the religious leaders! Says Dallimore, “The local clergyman, in what he called an effort ‘to defend the Church,’ opened a barrel of beer on the main street and used it to entice a mob to attack the evangelist.”

A year earlier he was hit in the eye with a stone while preaching, but went right back to it the next day: “We had continual showers of stones, walnuts, dirt, a cat and also a dead dog thrown at us. I was much afraid of the hurt on my eye, but the voice to me was ‘Better endure this than hell!’ I was struck on my forehead and under my right eye again, and also on my side with a stone.”

Wow. As mentioned, all the revivalists faced such opposition and physical assaults. In one brutal attack Whitefield was nearly killed. He often allowed spiritual inquirers to visit him with their spiritual problems. One night he let in a man to his room, only to be savagely beaten with a gold-headed cane. A second attacker appeared, but the commotion caused them to flee when others in the house appeared. The pair had intended to murder him.

Then there was all the verbal opposition, especially from church leaders, priests, bishops, etc. That was the really shocking thing. You would expect the heathen to oppose these Christians, but when church leaders joined the opposition, that was just so painful to witness and endure.

Many of these church leaders were not even genuine Christians, and most were carnal, compromised, worldly and spiritually dead. Pamphlets and books were written, published and distributed widely, attacking them as fanatics, troublemakers, lawbreakers and worse. All manner of lies and falsehoods were levelled against them.

Many of these Whitefield just ignored, but at times, for the sake of the gospel, he had to dispel the lies and clear his name from the slander and malicious rumours. This was something he had to deal with all throughout his 34-year evangelistic ministry.

All this offers a salutary lessons for us believers today. Just what sort of opposition are we facing? I suspect most of us have known nothing of such persecution. We all have a long way to go before having to endure this sort of demonic opposition. So we need to persevere, and prepare for possibly much worse to come.

Divisions, rivalries and dealing with criticism

One thing that was clear from this account of the great Awakening (and of any other move of God) is the way various rivalries will form, divisions creep in, and polarisation takes place. I already mentioned opposition from non-believers as well as nominal Christians.

But those within the same evangelical camp also tended to splinter and divide over theological issues, organisational methods, and behavioural activities. As a clear example, Whitefield, who was as much a founder of the Methodist movement as the Wesleys were, was Calvinist in his theology, while the Wesleys were Arminian.

That led to plenty of longstanding divisions, and John Wesley published a book denouncing what he saw as major errors in Whitefield’s theology. Eventually and reluctantly Whitefield published a reply to it. But all along Whitefield sought to be a peacemaker, and never gave up hope of having Christian unity with the Wesleys.

Decades later this became a reality. But for many years Whitefield was all but written off by the brothers. But he never gave up attempting to reconcile and unite. He hung on to his theological convictions, to be sure, but he always sought to bring peace and restoration.

And as the revival and awakening in England progressed, three distinct bodies began to emerge: the Moravians (founded by Zinzendorf), the Methodists, and the Whitefieldians. The three tended to attack each other and seek to take members from each other. Whitefield himself had long sought and worked for unity, and long sought to keep all the parties as one – but without compromising key doctrinal beliefs.

We all can learn from this. I am still trying to get all this right, especially on the internet. When do I stand firm theologically speaking, and when should I give a bit of ground? When should I publicly rebuke error, and when should I just hold my tongue? How much should I seek to be a peacemaker and strive for unity?

When must fellowship be severed? How can I seek to love others, while standing strong against clear errors in theology and doctrine? These and related questions I still am grappling with. The example of Whitefield certainly moved me and challenged me greatly.

As to dealing with criticism, Whitefield was constantly criticised and attacked – and from all sides. When he defended his Calvinism, he was criticised and attacked by non-Calvinists, most notably the Wesleys. But when he sought long and hard to keep relationships open with his various theological opponents, including the Wesleys, he was attacked by fellow Calvinists and others.

His usual response was to not respond to the critics. He knew he would be attacked as Christ and the disciples were, but he pressed on with his heavenly calling. But sometimes he had to reply publicly to all the lies, misinformation and false reports. And when he did reply, it was often in a far more gracious and Christlike manner than his attackers.

As I say, I am still learning how to deal with all this. I know all about criticism from all sides. It seems so often you just can’t win! It seems no matter what you do, what you say, or what you believe, you will always be surrounded by critics.

When and where do we respond, and when do we just bear with all the attacks? And how does this all work out in terms of Christian unity and fellowship? For example, the Wesleys could be quite cantankerous at times, and would not let ‘recalcitrants’ stay in their societies – much like being unfriended on Facebook today!

When do we take such harsh steps, and when do we seek and pray for a resolution? When is a public rebuke necessary, and when is just a prayer for your critics enough? When should we allow others to go their own way, as painful as it may be?

There is so much for all of us to learn here. I know I have such a long way to go in all of this. Thus reading about Whitefield in great detail as he dealt with this continuously was a real help and encouragement to me. It convicted me in many areas, and drove me to my knees. That is always a good thing!

And a last word on criticism. Like Luther at first, so here: it was not the intention of Whitefield and others to form a new church or a new denomination. Whitefield always considered himself to be a loyal member of the Anglican Church, although he fully loved working with other like-minded saints in nondenominational endeavours.

This too created all sorts of problems and resulted in all sorts of enemies rising up against him. He sought to be true to the CoE but he also extended the right hand of fellowship to true believers everywhere – within reason of course. Real fanatics and heretics had to be rebuked and rejected.

But Whitefield was certainly one of our best examples of a proper sort of ecumenism and working together. His deep humility and his willingness for others to get the credit played a big role in this. As long as God’s Kingdom was advancing and God was being glorified, he was happy to press on.

As mentioned, much more remains to be said, so stay tuned for further articles on the amazing life and ministry of George Whitefield.

7 Replies to “Lessons from the Life of Whitefield”