There is a convoluted history to this article and it requires a number of prefatory remarks. First, who is George McDonald? He was a Scottish writer and minister (1824-1905). While he wrote on theology and related matters, he is perhaps best known for his children’s stories and fairy tales.

I got to know about him through so many of my favourite writers who kept referring back to him and his writings – folks like Lewis, Chesterton, Tolkien and Madeleine L’Engle. As Lewis said of him: “I have never concealed the fact that I regarded him as my master, indeed I fancy I have never written a book in which I did not quote from him.” 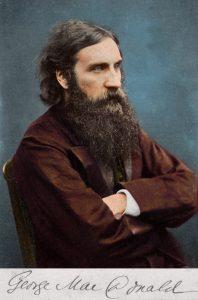 However, he was NOT an evangelical, doctrinally speaking, so any marauding bands of heresy hunters should please look away now. He was not orthodox on some key issues, having rejected much of his Calvinist heritage. Thus his views of the atonement and hell, for example, are not necessarily to my liking.

So I do not urge people to read him for his theology. But he was a great story teller, and my wife and I have read and reread his stories many times over. Indeed, reading some of these stories to small groups – including “The Light Princess” – many years ago helped me to woo a young Australian woman who eventually became my wife. So I guess I have a soft spot in my heart for the guy!

I have had a number of his books for nearly 40 years now, including the 2-volume The Gifts of the Child Christ, edited by Glenn Edward Sadler (Eerdmans, 1973). The story I want to focus on here comes from vol. 2 of this set. I was reminded of this today for two reasons.

One, I was with my wife and a friend at a second-hand theological bookstore and we found one volume of the set there, and we mentioned it to our friend. She did not bite, but maybe after reading this she will have a rethink! Second, I was just going through some old papers of mine.

While hoping to toss out most of this stuff occupying a few filing cabinets, I found one paper I wrote on redemption, and in it I used the MacDonald story to illustrate the concept. To be honest I don’t really recall writing it, and sadly it is not dated! At best it can be traced back to the mid-eighties: either done as a BA-level paper for college, or an MA paper for seminary.

In the paper, which I got a 24/25 grade for, I looked at the various biblical word groups for redemption. In the Old Testament, concepts like the kinsmen-redeemer are found, as well as the concept of ransom. In the New Testament most instances of the term revolve around the idea of a payment made by a third party to release someone from debt.

Christ of course is our redeemer who paid the price to set us free from the slave market of sin and death. In the rest of my paper I offered a condensed version of MacDonald’s 40-page story to help illustrate this concept. Here is how I abbreviated the story:

A long time ago there lived a king and a queen. At the birth of their first child, a girl, they gave a christening. But the king forgot to invite his wicked sister. So, being very miffed, she came anyway, with mischief in her heart. She put a curse on the font where the daughter was to be christened. The effect of the curse was to leave the girl totally lacking in gravity. So she shot up in the air, to the great horror of all present. She was quickly retrieved. After a while, it was decided that the light princess must be kept tied to a string, like a balloon, or well superintended.

She grew up a happy, laughing princess, but without gravity. But her parents were broken hearted. They tried everything they could do to regain her gravity, but to no avail.

By the palace was a lovely lake. One day, while out with a royal party, the light princess was accidentally knocked into the water. She was promptly rescued, but with the discovery that while she was in the water she regained her gravity. But she lost it again as soon as she left the water. So from then on, the light princess spent as much time in the water as she could. She loved the lake. Her only passion was to get into the water. Here she was free and alone, not tied down and watched by others.

Now there was a prince of another kingdom who set out to find himself a princess. He travelled and travelled, eventually to stumble upon the light princess at the lake. He immediately fell in love with her. She did not reciprocate, but she did love to jump into the water with the young prince.

One day however, something horrible was noticed by the princess. The lake was shrinking! This was due to the king’s wicked sister, who upon learning of the light princess’s joy in the water, went to the bottom of the lake and caused a slow leak in it. Thus the water level was gradually sinking. As the water level declined, so did the light princess’s spirit. In fact, she seemed to be dying just as the lake was.

Then, a note was sent to the king from his wicked sister saying that if any man would freely volunteer to use his body as a human cork to plug up the hole in the bottom of the lake, it would be refilled, at the expense of the hero who would sacrifice his life. But alas, no-one would volunteer to sacrifice himself. No one, except the young prince. He gladly volunteered, but under the condition that the light princess be there to comfort him and feed him during his ordeal. It was worth it to him to spend his last hours with her, until he at last should be submerged under the rising waters.

The light princess was overjoyed at the news, as she loved the water very much indeed. She did not especially care, however, that the young prince should have to die to secure the return of her lake.

So the time came, and the prince was placed securely in the hole at the bottom of the empty lake. At once the waters began to slowly return. The light princess was at his side, as promised, but she was bored. She only thought of the joys of once again frolicking in the full lake, still unconcerned about his sacrifice for her.

The waters slowly rose: up to his knees; up to his waist; up to his neck. Nightfall came. The waters were up to his chin. It soon covered his head. At this the princess suddenly grew wild, gave a shriek, and jumped out of her boat to pull him out. She pulled and pulled, but it was of no use – he had stopped breathing.

But she kept pulling, and finally got him loose and into the boat. She got him on shore, and others helped to get him into the castle and on to a bed. Through the night they sought to revive him, but without any luck. But as the sun rose, the prince opened his eyes. The princess both fell into tears and fell onto the floor! She had regained both her moral and physical gravity!

The lake was now full of course, and the wicked sister was buried beneath the bottom of the lake. The light princess soon learned how to walk and cope with gravity. She and her redeemer prince were of course married.

And they lived happily ever after.

I of course urge you to read the entire story for yourself. It is quite delightful, even for those not interested in any spiritual or theological overtones. If you can’t track it down in book form, you can both read it and listen to it here: etc.usf.edu/lit2go/28/the-light-princess/

Of course no analogy – or fairy tale – is perfect, but some basic biblical themes of redemption are certainly found here. We have the obvious notion of a substitute, or a third party entering in. We have sacrifice. One party dies so that another might live.

These are key elements of the biblical story. And if you can throw into the mix a terrific story then you have an extra bonus. As mentioned, MacDonald was not always as theologically sound as many of us might like him to have been. But he had a real gifted imagination and a great ability to spin some wonderful tales.

For more information on the man and his life, see these two articles for starters:

4 Replies to “George MacDonald, “The Light Princess,” and Redemption”