God said of the famous Old Testament character David that he was “a man after my own heart”. But he was also a very human and a very fallible man. That is the same with God’s people everywhere: they can be close to God and pleasing to God, but they are also redeemed sinners who still struggle and still fall.

And David had a spectacular fall as we know. In 2 Samuel 11 we read about his tragic encounter with Bathsheba. He betrayed Yahweh and his people by committing adultery and murder. (And if we are into listing the Commandments broken by David, we can also add the one about not coveting your neighbour’s wife.) 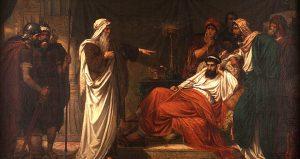 That is some pretty serious sin. Yet God’s response – as is so often the case – was a mixture of grace and judgment, as we find in the very next chapter. The famous incident of Nathan confronting David, and doing it by means of a parable, is a classic part of Scripture.

Before looking at the prophet Nathan’s hardcore encounter with King David, and noting the amazing grace found therein, let me say that I have written about this episode before, and I have looked at the very real consequences for David’s sin. See here for more on this: billmuehlenberg.com/2007/10/14/sin-forgiveness-and-consequences/

There I note that the consequences for this sin was severe and long-lasting. Just a few chapters earlier the Lord had made some great promises about establishing a dynasty through David, and he said “I will also give you rest from all your enemies”.

But after this great sin everything changes. As he is told by Nathan in v. 10, “the sword will never depart from your house.” Thus he had continuous conflict and bloodshed in his own family, as well as the division of the kingdom. All this was a result of his horrible choices. Yet God preserved his life and kept the Davidic line intact, leading to the Messiah.

That in itself was real grace. But there is more. God’s grace is clearly evident when he sent Nathan the prophet to confront David in the first place. Indeed, some of the most wonderful words in this whole sordid event are found in 2 Sam. 12:1: “The Lord sent Nathan to David.” God cared enough about David and his sin to do something about it.

He could have judged him instantly if he wanted. And the death penalty was warranted for both crimes. Or he could have just ignored David and abandoned him. But instead he went after David. This is amazing grace. It is, to be sure, grace mixed with judgment, but it is great grace nonetheless.

I very much like what Dale Ralph Davis says in his expository commentary on 2 Samuel. He speaks about “the pursuit of grace” in this episode. Let me quote from it here:

Of course we know what that will mean, for we have cheated and read the rest of the story. But we must not run ahead too soon; we need to dally on those opening words for they speak of the vigilance of grace; they show us that grace pursues and exposes the sinner in his sin. They teach us that Yahweh will not allow his servant to remain comfortable in sin but will ruthlessly expose his sin lest he settle down in it. You may succeed in unfaithfulness; but Yahweh will come after you. What immense and genuine comfort every servant of Christ should find in the first six words of this chapter! Not that God’s pursuing grace is enjoyable. But what if grace did not pursue? What if Yahweh abandoned us when we succeed at sin?

That should be good news for every single one of us. God loves us too much to leave us in our sin. He will not allow us to go long in sin and disobedience. The Puritan commentator Matthew Henry put it this way: “Though God may suffer his people to fall into sin, he will not suffer them to lie still in it.”

Of course there may come a time when God abandons someone to their sin. They may have reached a point of no return. We don’t really want to discover when that point might be. So we must stay soft and tender before the Lord, and allow him to have his way in our lives. We must not spurn his mercy and grace.

In his study on the life of David, Charles Swindoll says this about this grace-filled episode:

Grace means that God, in forgiving you, does not kill you. Grace means that God, in forgiving you, gives you the strength to endure the consequences. Grace frees us so that we can obey our Lord. It does not mean sin’s consequences are automatically removed. If I sin and in the process of sinning break my arm, when I find forgiveness from sin, I will still have to deal with a broken bone.

If there was great grace shown to David by God, so too to Nathan. Imagine being in his shoes. He is sent by God to rebuke the most powerful man in Israel. Most other kings would have simply lopped off the head of anyone who dared to confront them.

So Nathan was courageous, and he moved in God’s grace. Timing was one aspect of this, with most commentators believing it may have been a year after the sin took place. He gave God’s word in God’s way and in God’s timing. And he cared enough to confront, even if it might have ended up badly for him.

Thankfully it didn’t. David was caught out big time in condemning the man in Nathan’s parable, and he knew the gig was up. He confessed his sin and God graciously forgave him, even though there would be long-term consequences that he and his family would have to endure.

Those wanting more on all this should see two penitential psalms in which David lets us know just what he went through during this period. See Psalm 32 and Psalm 51. They are incredible stories about sin, confession, repentance and restoration – and are directly out of the experiences of David.

The lessons for us today should be clear enough. God does not change. He remains the same, and he deals with his people in a consistent manner. God is always holy, he always hates sin, and he always will deal with it. Thus we find both judgment and grace in the Old Testament, and we find them both in the New Testament.

We must always thank God for his grace, even when it is a part of his judgment. Indeed, his judgment is always gracious. He loves us too much to allow us to wander along in our sin. He will take firm measures when needed to seek to bring us back to him. He will do what he must to lead us to repentance and a new walk with him.

Thanks God for this wonderful grace.