Not too long ago truth used to be valued for its own sake. Truth had to be told, even if it upset some people. But today in the West truth has become taboo – or at least certain truths. Some truths are now fully off limits, and those who dare to utter such truths in public – or even in private – are treated like pariahs and worse. 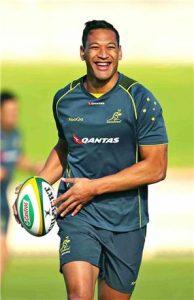 Political correctness and the militant left have combined to keep certain truths banned from the ears of the public. Certainly anything to do with things like homosexuality and the trans agenda is now verboten – that is, if it is in any way critical of these things. Dare to speak on this and you will be persecuted.

One noted sports figure has certainly learned this lesson the hard way. When the top-class professional rugby player and devout Christian Israel Folau said six months ago that he opposed fake marriage between two people of the same sex, he was roundly condemned by all the usual suspects. For stating truth in the public arena all hell broke loose.

Thankfully Folau is more committed to truth than to political correctness and kowtowing to the Left’s narrative. So a new social media comment of his has again helped to launch WWIII. And you guessed it, it is again on the topic of homosexuality. For daring to answer someone’s question while expressing his Christian faith, he has again stirred up the wrath of the tolerance brigade.

One news outlet covers his latest ‘sacrilege’ this way:

Australian rugby’s highest profile player Israel Folau has again courted controversy with a social media comment condemning gay people to “hell”. Six months after tweeting his opposition to same sex marriage ahead of the marriage equality postal vote last year, Folau said on Instagram that God’s plan for gay people was “HELL… Unless they repent of their sins and turn to God”. The dual international, who has 337,000 followers on Instagram, made the comment in reply to a question from another user on Tuesday, Folau’s 29th birthday.

“@izzyfolau what was gods [sic] plan for gay people??” user Mike Sephton-Poultney said.
“@mike_sephton HELL… Unless they repent of their sins and turn to God,” Folau replied.

The exchange was picked up and shared on Twitter before going viral around the world. A Rugby Australia spokesman said Folau had deleted the comment, although it was still visible on part of Folau’s profile on Wednesday afternoon.

It appears to be in contravention of Rugby Australia’s inclusion policy, which was adopted in 2014 and states: “Rugby has and must continue to be a sport where players, officials, volunteers, supporters and administrators have the right and freedom to participate regardless of gender, sexual orientation, race or religion and without fear of exclusion. There is no place for homophobia or any form of discrimination in our game and our actions and words both on and off the field must reflect this.”

Of course the PC and Pink thought police immediately sprang into action. As but one not-surprising response, Qantas has said it may stop its support: “Qantas is considering pulling sponsorship of the Wallabies if further homophobic statements are made by Israel Folau or other players.”

Yes it is the end of the world as we know it: dare to utter a shred of biblical truth and the whole world goes mad. And before I go any further, let me say that I fully expect – once again – all the trendy lefty “Christians” out there to express their outrage at how “insensitive” Folau was, and how he “damaged the cause of Christ,” etc.

Oh good grief, just zip it guys. He was asked a question and he responded. Sure, we all might have done things a bit differently. One might have been a smidge more cautious or prudent in such a response, but at least he responded. Most of our invertebrate believers would not have answered at all. Or if they did, they would have blabbered on about how there is nothing wrong with homosexuality.

I for one am glad he has the guts to speak up. One can say only so much in short social media comments, but I likely would have said the same thing, perhaps only with a slight addition: “Hell, which is where every sinner is headed… Unless they repent of their sins and turn to God.”

In order to get things fully right and nuanced on this issue, I have written hundreds of pages in books and articles to further detail my thoughts on all this. The social media is a different kettle of fish of course. But what he said happens to be 100 per cent biblically true. Again, he was not penning a PhD thesis on this, just a very quick response.

The truth is, I would rather take a short, perhaps crude statement on Christian truth any day of the week over all the namby-pamby, watered-down, and mealy-mouthed tripe most compromised believers would offer here. I for one have had a gutful of so-called Christians who say nothing and do nothing about the war against faith and freedom, but will happily attack Christians who at least have the courage of their convictions.

And he is an athlete after all, known for his physical abilities, not for being a Rhodes Scholar. But at least he knows his Bible and he is not afraid of sharing biblical truth even when everyone around him refuses to speak out. Give me a truth-teller – albeit an imperfect one – over all the craven and carnal cowards in our pews who never say a word about the vital issues of the day.

And this is what Scripture clearly teaches us: all of mankind is impacted by the Fall, and we are all sinners. We are all headed to a lost eternity, and that is why God sent his son to planet earth. By taking the punishment we deserve upon himself, Christ has made a way for people to be reconciled to God.

And that is a straight and narrow way: only through Christ. Those who repent of their sins and come to Christ can find forgiveness of sins and a new life with God. All this is basic Christianity 101. So all people are already condemned because of their sin, and all people must come to God on his terms, in faith and repentance.

Thank you Israel Folau for at least having enough courage and conviction to share biblical truth when asked. You have done more than the great majority of pew-warmers and arm-chair critics who have never opened their mouths once about the things that matter.

I will keep you in my prayers. And I suggest all Christians do the same. God bless you sir.

Folau is a Tongan and is married to a Kiwi/Samoan netball star. Just last night I spoke at a public meeting on the issue of homosexuality, transgenderism and the “Safe Schools” program. Overwhelmingly the audience was made up of Samoans and Polynesian Islanders.

They were all very responsive and receptive. They were all quite concerned about what is happening to our society and to our children. So Israel Folau is certainly not alone in having these concerns. And he is not alone in being an on-fire Christian who loves God and seeks to share biblical truth, despite all the vitriol and hatred.

33 Replies to “Folau and Unacceptable Truth”