Amazingly, little Alfie Evans is still alive – despite the best efforts of doctors, hospitals, judges and the English government. The tragic case of the 23-month old in Liverpool is still ongoing. Once again, by the time this article is published, things might be quite different. It is an hour by hour situation.

For those not in the know as to the details of this very sad and worrying case, see my previous article: billmuehlenberg.com/2018/04/25/alfie-evans-and-the-state-killing-machine/ 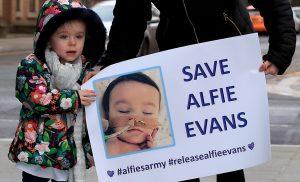 While concerned individuals from around the globe have been rallying to the defence of little Alfie and his parents, the latest seems to be this: in something of a U-turn, Tom Evans has now taken a conciliatory approach, saying he is trying to build bridges with the Alder Hey Hospital. As one media report puts it:

The father of seriously ill toddler Alfie Evans says he wants to “build his relationship” with the hospital he has been locked in a legal battle with. Tom Evans, who has been fighting to take his 23-month-old son out of Alder Hey Children’s Hospital, said he now wanted to be “left alone” to do so….

Mr Evans delivered a statement outside Alder Hey after a meeting with doctors at the hospital…. “We are very grateful and we appreciate all the support we have received from around the world, including from our Italian and Polish supporters, who have dedicated their time and support to our incredible fight. We would now ask you to return back to your everyday lives and allow myself, Kate and Alder Hey to form a relationship, build a bridge and walk across it.”

One can ask why this fairly radical turnaround has occurred. Have the parents “seen the light” and realised they had been wrong? Were they pressured into this public backdown? One analyst, John Zmirak, offers a more cynical assessment of all this.

His headline is this “Through Bloodied Teeth, Alfie Evans’ Dad Says He Now Loves Big Brother”. He begins by discussing how the main doctor involved with Alfie had said that unless the parents had a real change of attitude, the child would never be allowed to go home.

He then says this about Tom’s public announcement:

My heart sank reading that, in just the way it did at the end of 1984. Remember when Winston Smith, after weeks of interrogation and diabolical torture, finally breaks down? When he goes beyond pretending that 2+2=5, and actually comes to believe it? And whatever is left of his mind thinks that it really does “love Big Brother.” No one could possibly blame Mr. Evans. He has been tested past any point of endurance. The callous British state holds his little son hostage. It will kill him, one way or the other.

Those of us shocked to see this sick, pornographic abuse of parental rights and human dignity in the nation of Magna Carta ought to remember: George Orwell based his nightmare of tyranny on trends he saw in Britain. His villains are British villains. Likewise when C.S. Lewis wrote That Hideous Strength, he wasn’t depicting the cruelties of German Nazis or Soviet commissars. He drew on the petty tyrants he met in faculty lounges at Cambridge. Tolkien ended The Lord of the Rings with the “scouring of the Shire.” It showed the thuggish side that can emerge when Englishmen get drunk on wicked ideas.

Plenty of other commentary continues this case. Let me begin with one concerned mother from Melbourne, Kathy Clubb. Because of her strong support for the unborn, she too knows all about the coercive State and how it wars against some of our most cherished values.

She just penned a piece called “Medical Tyranny and Parental Authority”. Let me quote from parts of it:

As a parent, the most worrying aspect of the Alfie Evans case is that I may one day be in a position where I won’t be able to make decisions about my children. The scariest people in life aren’t socialist activists or Apex gang-members. No, most frightening are those who have the legal authority to take my children away from me. Many innocent people have been viciously mown down by an ideologically-motivated bureaucrat driving a red-tape-fuelled machine. There are children in care – now – who should rightfully be with their parents, or at least with one of them.

That kind of despotic authority doesn’t come from God and it isn’t part of natural law. Both God’s law and natural law teach that parents should have unfettered authority over their children – and for good reason: parental authority is kept in check by parental obligations.

It is a child’s parents who conceived him or her and accepted and birthed him. The parents alone nurtured that child, protected him, sheltered and fed him, and know him better than anyone else alive. They know his strengths and his weaknesses, and are responsible for training him and teaching him self-control. Parents can seek advice – and good parents certainly may need to do this – but they are the ones to evaluate the relevance of that advice and theirs is the choice to act or not to act on it.

Ultimately this is about individual freedom versus statist tyranny. Clubb quotes Jacqueline Laing who writes:

One of the reasons Evans causes public consternation is because it is really about liberty – not principally the right to life. It involves related questions about parental liberty to access treatments, care, second opinions, and diagnoses at other hospitals available to them. Properly interpreted, these rights are guaranteed under Articles 5 and 8 of the European Convention of Human Rights and Fundamental Freedoms (ECHR).

A few days ago Jennifer Hartline wrote in a similar vein:

The scales are not tipped in favor of life. Always death. Terri Schiavo. Charlie Gard. Now Alfie Evans. In every case, family members and other medical professionals were able and willing to provide care, yet each time, that other care was forbidden by the courts.

The big question is, does the State “own” your child? If your child becomes very sick — strangely, mysteriously sick — and suddenly going home is no longer an option: are children simply captives to the hospital treating them? Do parents by default surrender all rights of custody and decision-making regarding their child to the hospital or a panel of judges? The answer seems to be yes, and that ought to terrify every parent in the civilized world.

To add unbearable fear to an already terrible burden for parents, now they have to stop and consider whether the people caring for their sick child will turn on them, using unjustified legal bullying to deny them the right to decide what is best for their child. Parents have to wonder whether they might lose custody of their child to a hospital simply for wanting a second opinion, or a different treatment. Will they be shut out of their child’s care?

Finally, let me offer some incisive words from David French on this case. He begins:

How does a nation reach a point where it will essentially kidnap a child from a loving, functioning family, yank that same child off life support, deny him care as he unexpectedly fights to stay alive, and then block attempts by a foreign government to rescue him and provide him top-notch care free of charge? How does a great civilization sink to such barbarism and tyranny?

He discusses what is found in America’s founding documents and continues:

You’ll notice two things right away. First, there is a fundamentally religious element to America’s founding. The primacy of the “Laws of Nature and Nature’s God” is clear and explicit. Second, the state is thus inherently and inescapably subordinate to these laws, existing mainly to protect the rights God grants.

Applying the philosophy of the founding to a case like Alfie Evans’s yields a clear result. The state exists to protect the life and liberty of its citizens. Both are in play here: Alfie’s life and the liberty of his parents to in good faith and with due consideration make health-care decisions on behalf of their sick child. Raised against the backdrop of American liberty, there are millions of Americans who understand this reality almost instinctively, without knowing an ounce of constitutional law. Their very spirit rebels against Great Britain’s actions.

And he offers us the big picture here:

Marry statism to utopianism, and you create an alluring vision that empowers a host of self-righteous evils, centralization and authoritarianism chief among them. If government defines the good, then where is the room for dissent? Does it not merely impede and complicate the administration of social justice?

Jonathon Van Maren has just alerted us to some rather grisly but relevant facts about the hospital in question. It turns out that they were busted for harvesting organs of babies between 1988 and 1996, without the knowledge or consent of their families.

He finishes his piece on this with these words:

The pathologist was banned from practicing medicine in the United Kingdom, but was not criminally charged for his actions—although the discovery of what had been going on at the Alder Hey Children’s Hospital did result in the Human Tissue Act of 2004, which revamped legislation that dealt with the handling of human tissue in the United Kingdom and ultimately created the Human Tissue Authority. As Sohrab Ahmari of Commentary Magazine put it: “Why do I get the feeling that Alder Hey hospital is a place where the professionals don’t respect the inherent dignity of the human person.”

10 Replies to “Alfie Evans and the Totalist State”