Millions and millions of people have just watched the royal wedding of Prince Harry and Meghan Markle, held at Windsor Castle and televised to the watching world. I notice that here in Australia channels 7, 9, ABC and SBS were all covering it – that’s four out of the five main channels.

I guess people still like weddings, especially royal weddings. I must confess that because I am not English nor Australian, but an American, they do not have quite the fascination for me that they do for countless others. So I only flicked on to it now and then. 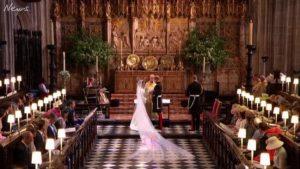 Thus I may not be the most qualified to speak on it, since I only saw parts of it, but as is so often the case, I am using this as a springboard to make some spiritual points. As to the ceremony itself (or the parts I actually saw), it was good to see some of the gospel message getting a hearing.

The Archbishop of Canterbury seemed to give us the biblical version of events. He spoke of marriage as being a gift of God, and a picture of Christ and his bride. Yes, great biblical truths those. So for the kazillions of people watching this, they heard once again some biblical passages and a reminder of what true marriage is all about.

And following in the footsteps of Princess Di and Kate Middleton, Meghan chose to not mention the word ‘obey’ in her vows – she is too much of a modern feminist it seems to run with that sort of stuff. And of course critics have been guessing for a while now how long they think this marriage will last.

Let us hope that it does last, but of course recent history with the royals is not very promising in this regard. So we will have to see how things pan out, but we can wish them well, and pray they really do get to fully understand what Christian marriage is all about.

It is at this point that I want to turn this into a mini-devotional. I want to look at marriage from a biblical point of view. And I also especially want to look at the grand story of Scripture – the biblical metanarrative if you will. One quote I have always liked in this regard is worth sharing here.

It comes from someone I certainly do not fully agree with in various theological areas, but the gist of what he says here I think is helpful. I refer to Robert Farrar Capon who was an American Episcopal priest (1925 –2013). In his 1995 book The Romance of the Word, he actually has three of his earlier books combined into one volume.

The one I wish to quote from here was his 1969 book, The Third Peacock. Near the end of it he says this:

When I teach dogmatic theology, I try to set up the faith on the same framework I’ve used in this book: the Trinity creating the world out of sheer fun; the Word romancing creation into being and becoming incarnate to bring it home; Jesus as the sacrament of the Word; and the Church as the sacrament of Jesus. Having done that, I then ask the crucial question: How does the story actually end?

Invariably, I get all the correct but dull answers: The Word triumphs; creation is glorified; the peaceable kingdom comes in. And I say, Yes, yes; but how does the story actually end? The class looks at me for a while as if I were out of my mind, and then offers some more of the same: The Father’s good pleasure is served; humanity is taken up into the exchanges of the Trinity. And I say again, Yes; but how does the story end in fact?

No answer. I try another tack: Where does the story end? Still no answer. All right, I say, I’ll give you a hint: Where can you read the end of the story? And eventually someone says: In the book of Revelation – but who understands that?

I’m not asking you to understand it, I say. I just want to know what you read there. What is the last thing that happens?

And, slowly and painfully, it finally comes out: The New Jerusalem comes down from heaven to be the Bride of the Lamb.

They never see it till they fall over it? It’s the oldest story on earth: boy meets girl; boy loses girl; boy gets girl! He marries her and takes her home to Daddy. The Word romances creation till he wins her.

Yep, that is about it. I often teach on the biblical worldview and I usually seek to make a similar case: that the biblical story is really just an old-fashioned love story in three acts. Any successful romance novel has the same formula, the one he mentioned: boy meets girl; boy loses girl; boy gets girl.

And of course the book of Revelation certainly does talk about this REAL royal wedding. And what a wedding it will be! If you thought the just-held royal wedding was really fancy, spiffy, and high-class, wait till the ultimate marriage of Christ and his Bride takes place.

Then I heard what sounded like a great multitude, like the roar of rushing waters and like loud peals of thunder, shouting:
“Hallelujah!
For our Lord God Almighty reigns.
Let us rejoice and be glad
and give him glory!
For the wedding of the Lamb has come,
and his bride has made herself ready.
Fine linen, bright and clean,
was given her to wear.”
(Fine linen stands for the righteous acts of God’s holy people.)
Then the angel said to me, “Write this: Blessed are those who are invited to the wedding supper of the Lamb!” And he added, “These are the true words of God.”

Then came one of the seven angels who had the seven bowls full of the seven last plagues and spoke to me, saying, “Come, I will show you the Bride, the wife of the Lamb.” And he carried me away in the Spirit to a great, high mountain, and showed me the holy city Jerusalem coming down out of heaven from God, having the glory of God, its radiance like a most rare jewel, like a jasper, clear as crystal. It had a great, high wall, with twelve gates, and at the gates twelve angels, and on the gates the names of the twelve tribes of the sons of Israel were inscribed— on the east three gates, on the north three gates, on the south three gates, and on the west three gates. And the wall of the city had twelve foundations, and on them were the twelve names of the twelve apostles of the Lamb.

As I wrote in an article from 2012: “So the grand climax of human history is a glorious wedding. All the people of God collectively will join in the greatest wedding of all time, as she joins fully with Christ when he returns. That is where human history is heading, and that is why Jesus Christ was born.”
https://billmuehlenberg.com/2012/12/22/the-christmas-metanarrative/

So a wedding like we just saw is a very, very pale imitation of the real thing that comes at the end of human history, one which will launch us into eternity. It is a glorious hope for all of God’s people. And the good news is, if you are still single, and have never married, and may not ever marry in this life, if you are a Christian redeemed by the blood of the Lamb, you still have a mega-wedding to look forward to and participate in.

That is the glorious good news of the gospel. Don’t miss out on it!

15 Replies to “On the Royal Wedding”