Michael who? you ask. You know, the Black American preacher who spoke at Prince Harry and Meghan Markle’s royal wedding. One thing that did get the attention of many people – for good or ill – was the somewhat lengthy sermon preached by the Most Rev. Michael B Curry. It has caused a fair amount of controversy for a number of reasons.

Many staid and proper Englishmen and women for example who may not be familiar with how Black Americans preach may have found him to be far too lacking in tact, décorum and proper restraint. But that is how they preach! Thus many may not be used to this sort of preaching, and some may have rightly thought it went on a bit too long. 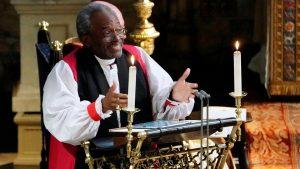 On the other hand, less traditional, and/or more charismatic or Pentecostal Christians may have loved it: he spiced things up a bit in a rather dry church service. Many in fact are praising him and his sermon. They think it was just terrific.

I am not so certain. I sure don’t mind Black preachers when they passionately preach a biblical gospel, but that for me is the real issue here: was he? Michael Curry is of course part of one of the most liberal denominations in the US, and is a theological and political liberal.

For example, he is strongly anti-Trump and pro-immigration. But of course many Black Americans are. However, it is theological views that are even more of a concern to me. We know that he is fully in favour of things like homosexual marriage and has sought to make that case for some time now.

Therefore the real issue is this: was his sermon just a ‘love, love, love’ message, lacking in biblical content which would fit his pro-homosexual theology? I believe that in fact is the case. It seems to have been a much more mushy theological liberalism with a lot of God words and love words thrown in, rather than a full-scale biblical message.

As mentioned, it appears that plenty of less staid and less traditional Christians really liked his fiery and passionate preaching, and got all excited about it. But – and this is a big but – it seems some of them let the presentation and delivery cloud their judgment a bit as to his actual content.

Not that one needs to hear a full-scale gospel message at a wedding, but we should hear some of it from Christian preachers. And we really ought to know how theological liberals operate by now. They always use Christian jargon and even biblical terminology, but they put a much more liberal spin on it.

So simply citing a passage like 1 Corinthians 13 does not make a preacher solidly biblical. This is of course quoted all they time by the activists when they want to insist that homosexual love is just peachy, and love is all that matters anyway.

To say ‘God is love’ is the easiest thing in the world to say. Everyone likes to say it and hear it, even non-Christians. But to make clear what exactly that means from a biblical point of view is a far different matter. To divorce his love from the full biblical message, including the fact that we are all sinners heading to a lost eternity unless we turn to Christ, is to give us a false picture of who God is.

You will be praised by everyone if you tell us ‘all you need is love’. They loved it when the Beatles told us that. But if you want to be biblical and tell us that the love of God is a very specific and demanding thing, and faith and repentance and turning from sin are keys to getting access to God and his love, then people will get quite upset with you.

Thus a discerning Christian listener would have known that something may have been amiss here. They would have seen that an emphasis on love – as good as that can be – without a corresponding emphasis on who God is in his righteousness, holiness and purity, will give us a skewed image of God.

Yes, I guess we can be thankful that many people heard some Bible passages being quoted. But no one will get saved just hearing about how neat love is. Of course that was not his intention anyway. So his talk was at best a mixed bag in my view.

That God might be able to use his words – and many Christians have leapt to his defence already – is always possible of course. As I keep saying, if God can use Balaam’s ass for his purposes, he can use anyone. But if non-believers go away thinking ‘love is all there is’ and whistling an old Beatles’ tune, they will remain far from God and his saving gospel.

When you preach all about love, but fail to properly and biblically define it, then you get exactly the sort of guy he is: a pro-homosexual and liberal pastor. Simply using some God words is not enough. I think his remarks were vague enough to please everyone – except those who expect a Christian pastor to give us much more solid gospel truth.

And in this the Archbishop of Canterbury Justin Welby did far better, at least at this wedding! Often he too can be way off, but here he said the right things for the most part. So in various ways the gospel message was heard, and we can all be thankful for that.

But I do not share all the excitement and exuberance so many Christians have had over the Curry talk. He may have offered us curry in a hurry, with a lot of energy and passion, but it was at the end of the day a rather weak, sentimental and mushy message that is fully typical of all liberal preachers.

It might make some people feel good, but it will not drive them to their knees before a holy and just God. Again, an evangelistic message need not be preached at every wedding, but as I said, Justin Welby seemed to give us a far more biblical message than the American pastor did.

That is just my two cents worth on this. Those who want to drive me out of town – or worse – are advised to please just agree to disagree here thanks! But here is one thing we all can and should agree to: let’s pray that the newlyweds discover not only the real meaning of marriage, but come to know the risen Christ who died for their sins so that they might become new creations and attend the real royal wedding at the end of the age.

70 Replies to “On Michael Curry and the Power of Love”