Here is my in-your-face thesis: When folks vote against things God so very highly regards such as the sanctity of life and heterosexual marriage and family, they forfeit the right to call themselves Christians, and they very likely are not Christians. 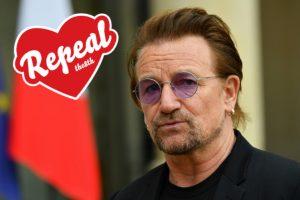 Yes, I know, some qualifications need to be offered here, and I will do that in a moment. But I do not want death by a thousand qualifications to rob the prophetic edge to this statement. When you claim to be something, but act in a completely opposite way, one can rightly question your claims.

What I especially have in mind here of course is a vote just being held on the issue of abortion in Ireland. It seems that the majority of Irish voters may have chosen to overturn a prolife amendment there. Bear in mind that this is a nation that is still considered to be predominantly Roman Catholic.

It is worth noting that the Preamble to the Irish Constitution begins with these words: “In the Name of the Most Holy Trinity, from Whom is all authority and to Whom, as our final end, all actions both of men and States must be referred”.

The Eighth Amendment of the Constitution Act, 1983 “Acknowledged the right to life of the unborn, with due regard to the equal right to life of the mother”. It seems this Amendment is now being voted down by Catholic Ireland. Yes I know, we need to wait a bit longer for the final results, but many are now saying this will be the likely outcome.

As one news report states:

Polls by The Irish Times and RTE suggest about 69% voted to repeal a part of the constitution that effectively bans terminations. Taoiseach (prime minister) Leo Varadkar, who supported the reforms, said it looked as if the country was about to “make history”. Official counting of votes will begin at 09:00 local time.
Those taking part in Friday’s referendum were asked whether they wanted to repeal or retain a part of the constitution known as the Eighth Amendment, which says an unborn child has the same right to life as a pregnant woman.
Broadcaster RTE’s exit poll suggested 69.4% in favour of the Yes side and 30.6% for No. In Dublin, 79% of people voted for repeal, according to the RTE poll. An exit poll released by The Irish Times points to 68% Yes to 32% for No.

Miracles can happen, and exit polling is not always foolproof. But if these predictions are even remotely accurate, it seems that Ireland will join other Western nations in voting for the officially sanctioned killing of unborn babies. Everywhere we see the ugly culture of death sweeping over the West.

Of course this is the same ‘Catholic’ Ireland that voted to legalise fake homosexual marriage in May, 2015. Hmm, last time I checked, Catholics were supposed to be prolife and pro-marriage – at least biblical marriage. So it seems we have plenty of nominal Catholics in Ireland who really don’t take their faith seriously at all.

And the examples of this are legion. I just spotted this headline in an online English newspaper: “Why I, as an Irish Catholic woman, would vote ‘Yes’ to repeal the Eighth”. It is penned by Judith Woods, whoever she is. It seems she is a columnist for The Daily Telegraph.

But the headline tells me all I need to know about her: chances are very good that you are not a Catholic at all if you can run with this pro-death advocacy. And it is not just Catholics of course who are showing where they are really at. Plenty of Protestants are doing exactly the same thing. One very public case in point is U2’s Bono.

The Irish rocker, who claims to be a Christian, said a few weeks ago that he and the band fully support the law change. As one news item reported:

U2 angered fans last week after the rock band tweeted support for legalizing abortion in Ireland. The band tweeted a graphic with the words “Repeal the 8th,” referring to the upcoming Irish referendum on abortion. Voters in Ireland will head to the polls on May 25 to possibly repeal Article 40.3.3 of the Irish Constitution, which gives unborn fetuses the same right to life as the mother.
Though some supported U2’s stance on the issue, many pro-life fans said they were “disappointed” with the band. “This breaks my heart. I have loved and followed you for 20 years. I still love you but I can’t follow you down this road. My tickets to upcoming shows will go unused,” one fan wrote.

Band member Dave “Edge” Evans gave a pitch for repealing the Eighth, and said “The important thing is to vote.” But as Bristol Palin responded,

No, the important thing is NOT voting. There are more important things… like protecting valuable and innocent babies… like defending the defenseless. Like not killing other people. Like standing up for life. . . . I get it that this is a controversial issue. But I just hate it when Christian people refuse to stand up for the most vulnerable people on the planet.

seems to be taking its place in a long line of pop culture figures who have followed the path of least resistance: to support what is culturally and politically convenient rather than speak the unchangeable truth. Killing a child in its mother’s womb is a horrifying practice, and that the state would sanction it should in no way assuage our consciences. As much as Christian forgiveness is freely given, there are still higher laws and divine authority that must be respected. If Bono and the rest of everyone’s favorite Christian rock band possess enough hubris to support the legalization of abortion in Ireland, maybe they really do think they can play God.

Yes, one need not just pick on Bono and U2 here of course. I have written plenty of articles over the years discussing other big cheese artists and celebs who claim to be Christians but who support things like homosexual marriage and baby killing. Their actions betray their words, and one has every right to question their Christian bona fides.

As I said above, some qualifications are needed here. Yes, at the end of the day, only God fully knows the human heart, and only he knows who are truly his, and who are not. But of course Christians are given all sorts of doctrinal and behaviour tests to use in assessing others.

We are to ‘know them by their fruit,’ as Jesus said, and we are to critically test and assess their teachings, as Paul so often said. So we have no need to remain silent here. We are to test all things, and we are to call out those who say they are right with God but live like the devil.

Sure, many of these believers may just be really ignorant, or clueless, or uneducated, or deceived. Many would be woefully biblically illiterate. And many are just cowardly or worldly or carnal, and are just happy to be trendy and politically correct, and don’t want to rock the boat.

But as Jesus so clearly warned in Matthew 7:21, “Not everyone who calls out to me, ‘Lord! Lord!’ will enter the Kingdom of Heaven. Only those who actually do the will of my Father in heaven will enter.” Those are strong and stern words – words that every single one of us must take with the utmost seriousness.

So let me say it again: When folks vote against things God so very highly regards such as the sanctity of life and heterosexual marriage and family, they forfeit the right to call themselves Christians, and they very likely are not Christians.

24 Replies to “Stop Pretending You Are a Christian”