If you want to know what pure and unadulterated evil looks like, one can simply look at the pictures of the crowds going ecstatic on Irish streets the other day. Of course one need not single out Ireland and their recent vote to officially sanction baby-killing. Plenty of other countries have done the same over the years.

But seeing the crowds on the streets cheering and celebrating and going in a frenzy when the result of the vote was announced is enough to make anyone cry – at least anyone who still has a soul. And I could not help but think of a similar situation where the masses went wild, also with blood on their hands. 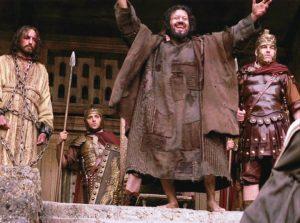 The crowds cheered when Jesus was publicly condemned to death. In Ireland the crowds cheered when babies were publicly condemned to death. We have the very same demons behind it all. Celebrating death is always evil. Whether it is cheering on the death of the perfect and blameless Son of God, or the death of innocent and defenceless unborn babies, the same demonic spirits are involved.

Some 2000 years ago the crowds had shouted out, “Give us Barabbas”. Pilate had offered to let the innocent Jesus go, but the crowds insisted that the criminal Barabbas be released instead, and Jesus be put to death. We read about this in John 18:38-40:

“After he had said this, he went back outside to the Jews and told them, ‘I find no guilt in him. But you have a custom that I should release one man for you at the Passover. So do you want me to release to you the King of the Jews?’ They cried out again, ‘Not this man, but Barabbas!’ Now Barabbas was a robber.”

It is no different to what we find in Ireland and elsewhere. The crowds said, “Give us sex – sex without responsibility, sex without consequences, sex without morality.” So they went with sex, and said it will be the babies who must be put to death.

As one meme making the rounds of late puts it: “Abortion is the world’s resounding answer to the question: ‘If you had to murder in order to have an unfettered sex life, would you?’” Once again, a guilty sinner is favoured while the innocent are made to suffer and die. It is the same immoral and ungodly spirit of death. It is the same demonic hatred of life on display in Ireland, just as it was back in Jerusalem.

With God there is life, with Satan there is death. You choose. Who are you siding with here? We expect non-Christians to run with death and destruction, but it should not be so with those who claim to be God’s people. Yet here we had a supposedly Catholic-majority country siding with death and the devil.

How do we account for this? It is simple really: these folks are NOT Christians. They cannot be. No real follower of Christ can spit in God’s face and declare black to be white, and sin to be virtue. Long ago the prophet Isaiah put it this way (Is 5:20):

Woe to those who call evil good
and good evil,
who put darkness for light
and light for darkness,
who put bitter for sweet
and sweet for bitter!

As I said in a recent piece, there are plenty of Protestants who also are deceiving themselves. When rock stars like Bono tell us they are Christians and they support baby-killing, you have a clear case of fake Christians running with fake news. See my article here: billmuehlenberg.com/2018/05/26/stop-pretending-you-are-a-christian/

It may seem a bit harsh to modern ears – and to namby-pamby Christian ears – to speak of the culture of death and the demonic. But the two go together hand in hand, and they both accurately describe the proabortion worldview and sentiment.

One simply has to look at what the pro-death camps says in public. Consider just a few diabolical banners proudly held up by pro-death demonstrators at prolife rallies. Back in San Francisco in 2011 at the Walk for Life West Coast some pro-aborts held up a large banner with these words: “If Mary had had an abortion we wouldn’t be in this mess.” Once again, we see the hatred of God fully coupled with the hatred of life.

And at a prolife march I was at back in 2014, there was one angry protestor holding up a large sign with these words: “The only good baby is a dead baby.” I wrote about that encounter here: billmuehlenberg.com/2014/10/11/when-love-and-hate-collide/

And when pure evil is embraced and championed, the mind becomes darkened. As we read in Romans 1:21-22: “For although they knew God, they did not honor him as God or give thanks to him, but they became futile in their thinking, and their foolish hearts were darkened. Claiming to be wise, they became fools.”

Consider a few examples of this. At another prolife rally I attended, one pro-death protestor held up a sign with the words, “Legal abortion saves lives”. Wow. Talk about Orwellian doublespeak. Talk about believing a lie. So legal baby killing saves lives? Try telling that to all the dead babies.

Another sign proudly held up said this: “I had an abortion because I chose life.” Yes, she actually said that. This is now a case of where white has become black, and the mind has turned to mush. To say such things with a straight face demonstrates both mental and moral degeneration and death.

And we even saw on the news reports pro-death marchers in Ireland carrying their toddlers with them! One Irish repeal advocate had this sign held high: “For our daughters: YES. Repeal the 8th.” Um, which daughters? The ones who are killed, or the ones who escape the death sentence?

Today we are without question in an all-out war. It is a conflict of cosmic proportions between good and evil, between God and the devil, between life and death, between right and wrong. There can be no sitting on the fence here. You are either in one camp or the other.

It is your choice. As God told Moses in Deuteronomy 30:19, “This day I call the heavens and the earth as witnesses against you that I have set before you life and death, blessings and curses. Now choose life, so that you and your children may live.”

Or as Joshua told the Israelites, “Choose this day whom you will serve” (Joshua 24:15). We all must decide: will we choose God and life, or Satan and death? There is no middle ground here. ‘You are either for me or against me’ as Jesus said.