It can be said with full biblical warrant that Jesus is the great divider. Perhaps no other figure in human history has been so divisive. And that may strike many people – even many Christians today – as being quite bizarre. “Really? Jesus divisive? I thought he was all about love and unity and just getting along with everybody.” 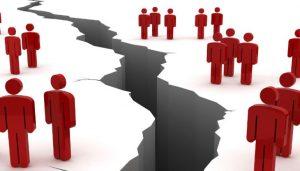 Um no, wrong Jesus. No one actually reading through the four gospels could ever come away with that completely false understanding of Jesus. They say repeatedly that he came to bring division – and that he did. Just as Jesus still divides today, he certainly did 2000 years ago.

Indeed, all of human history is even divided because of his birth: BC and AD. Christ divides. How could it be otherwise? His message was so countercultural that it ran against all the beliefs, values and convictions of most people. He and his disciples were always bringing about division, turmoil, controversy and upheaval.

If I recorded all the examples of this found in the New Testament I would need to pen several articles at least. So let me narrow things down here a bit. Let me look just at Luke’s gospel. There is plenty of material to be found here on this. Consider these passages:

Luke 2:34-35 Then Simeon blessed them and said to Mary, his mother: “This child is destined to cause the falling and rising of many in Israel, and to be a sign that will be spoken against, so that the thoughts of many hearts will be revealed. And a sword will pierce your own soul too.” [Simeon predicts the division Jesus would bring to Israel]
Luke 3:17 His winnowing fork is in his hand to clear his threshing floor and to gather the wheat into his barn, but he will burn up the chaff with unquenchable fire [John prophesies the division Jesus would bring to Israel]
Luke 4:28-29 All the people in the synagogue were furious when they heard this. They got up, drove him out of the town, and took him to the brow of the hill on which the town was built, in order to throw him off the cliff.
Luke 6:11 But the Pharisees and the teachers of the law were furious and began to discuss with one another what they might do to Jesus.
Luke 7:23 Blessed is anyone who does not stumble on account of me.
Luke 8:37 Then all the people of the region of the Gerasenes asked Jesus to leave them, because they were overcome with fear. So he got into the boat and left.
Luke 9:4-5 Whatever house you enter, stay there until you leave that town. If people do not welcome you, leave their town and shake the dust off your feet as a testimony against them.
Luke 9:53a but the people there did not welcome him
Luke 10:10-16 But when you enter a town and are not welcomed, go into its streets and say,…
Luke 11:14-16 Now he was casting out a demon that was mute. When the demon had gone out, the mute man spoke, and the people marveled. But some of them said, “He casts out demons by Beelzebul, the prince of demons,” while others, to test him, kept seeking from him a sign from heaven.
Luke 11:53-54 As he went away from there, the scribes and the Pharisees began to press him hard and to provoke him to speak about many things, lying in wait for him, to catch him in something he might say.
Luke 12:51-53 Do you think I came to bring peace on earth? No, I tell you, but division. From now on there will be five in one family divided against each other, three against two and two against three. They will be divided, father against son and son against father, mother against daughter and daughter against mother, mother-in-law against daughter-in-law and daughter-in-law against mother-in-law.”
Luke 13:17 When [Jesus] said this, all his opponents were humiliated, but the people were delighted with all the wonderful things he was doing.
Luke 16:13-15 He said we “cannot serve two masters”. The Pharisees, who loved money, heard all this and were sneering at Jesus. He said to them, “You are the ones who justify yourselves in the eyes of others, but God knows your hearts. What people value highly is detestable in God’s sight.”
Luke 19:47 Every day he was teaching at the temple. But the chief priests, the teachers of the law and the leaders among the people were trying to kill him.
Luke 20:17-19 Jesus looked directly at them and asked, “Then what is the meaning of that which is written:
“‘The stone the builders rejected
has become the cornerstone’?
Everyone who falls on that stone will be broken to pieces; anyone on whom it falls will be crushed.” The teachers of the law and the chief priests looked for a way to arrest him immediately, because they knew he had spoken this parable against them. But they were afraid of the people.
Luke 23:20-21 Wanting to release Jesus, Pilate appealed to them again. But they kept shouting, “Crucify him! Crucify him!”

Wow! That is one very divisive figure. Wherever he went, whatever he said, and whatever he did, he caused division. So much for world peace and harmony. And just as it was with Christ so long ago, it is the nature of the Christian gospel to polarise and cause division.

A gospel which says that you are not God, that you are heading to a lost eternity without God, and that you must repent, deny yourself, and turn to Christ, is not exactly how you win friends and influence people. It is how you enrage people and send them into hysterics – the very sorts of things we find in the gospels and the book of Acts.

And the very thing we find in 2000 years of church history. There have been countless Christian martyrs through the centuries, because people hate the gospel and they hate the truth. And that was something Jesus warned us about. He told us that we would not be accepted and our message would be rejected.

And he explained quite clearly as to why this would be. Consider his words as found in John 3:18-21:

Whoever believes in him is not condemned, but whoever does not believe is condemned already, because he has not believed in the name of the only Son of God. And this is the judgment: the light has come into the world, and people loved the darkness rather than the light because their works were evil. For everyone who does wicked things hates the light and does not come to the light, lest his works should be exposed. But whoever does what is true comes to the light, so that it may be clearly seen that his works have been carried out in God.

Let me return to Luke’s gospel and offer a lengthy but very important quote that comes from James Edwards’ excellent 2015 commentary on Luke. It appears in his discussion of Luke 12:49-59:

There is great disparity between the kingdom and this world. The introduction of the kingdom in Jesus awakens the world to its alienated existence from its Creator and points it to its Restorer and Redeemer. In vv. 51-53 Jesus articulates the effect of introducing the kingdom in terms of division. Division, and in some instances disunity, are not unfortunate side-effects of the Incarnation….

The essential function of the Messiah, according to Luke, is not to heal divisions but to intensify them. Indecision does not divide, but decision, by its very nature, divides the chosen from the nonchosen. The decision to follow Jesus inevitably concentrates and focuses the lives of disciples: Peter and the Zebedees are divided from nets and homes (5:1-11), the women who follow Jesus from homes, spouses, and possession (8:1-3), and disciples in mission from their customary securities (9:3; 10:4). The theme of decision and division has of course been latent throughout Luke’s narrative, but in chaps. 11–12 it is specifically and repeatedly addressed, signifying that decision and division are essential to the gospel….

Even as an infant, the significance of his life was foreseen in terms of “division.” “The child is destined to cause the falling and rising of many . . . and a sword will pierce your own soul too,” declared Simeon (2:34-35). If the mother of Jesus is “constrained” to participate in the division that Jesus brings into the world, then all human families are constrained by the same division, “father against son . . . daughter against mother” (v. 53).” Division may seem discordant and even offensive to our inclusive age, but it is a fundamental property of God’s relation to the world.

Exactly right. Sure, when and where possible we seek to be peacemakers. And we do not go out of our way looking for trouble or seeking to be divisive. But the gospel by its very nature IS divisive. Jesus was divisive. And the followers of Jesus will be divisive as well. It just can’t be helped, if we seek to be faithful to biblical truth, and proclaim it far and wide.

In this sense, three cheers for division. I conclude with three brief quotes:

“Peace if possible, truth at all costs.” Martin Luther

“Never let us be guilty of sacrificing any portion of truth on the altar of peace.” J. C. Ryle

“To pursue union at the expense of truth is treason to the Lord Jesus Christ.” Charles Spurgeon

6 Replies to “Jesus and Division”