OK, by the time you read this, it will likely no longer be 33,333. The number will be higher, but the statistic is utterly telling, and should shock every single one of us. So what am I talking about? You can see the graphic for yourself. It says this: “Islamic terrorists have carried out more than 33,333 deadly terror attacks since 9/11.”

It is found at this rather depressing but indispensable website, www.thereligionofpeace.com/

The folks at TheReligionofPeace.com have been performing an incredible and invaluable service to humanity by meticulously keeping track of just how peaceful the religion of peace really is. Every attack, every killing, every assault, and every suicide blast is recorded and documented.

Try to let this latest number sink in. Indeed, let me break the numbers down for you. Since that horrific day in 2001, we have had 6,128 days come and go. Take the number of deadly Islamic jihad attacks and do the math. But let me save you the trouble. That comes down to 5.5 deadly jihad attacks every single day. 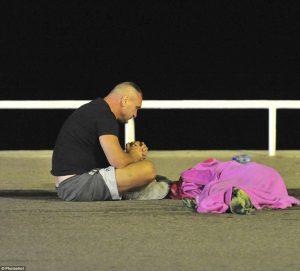 On average, throughout the world, we have over five deadly attacks being carried out every day by this political ideology. And bear in mind that this is NOT a list of every Islamic jihad attack. It only covers those that result in innocent men, women and children being killed.

If a period of nearly 17 years is hard to fathom, let me tell you what has happened just during the last full week, since this terrific website offers us that information as well. From June 9 to June 15, 2018, there were 46 Islamic attacks killing 242 people and injuring a further 219 others. That took place in 13 countries and it included 11 suicide attacks.

Hmmm, ‘religion of peace’ you say? So what is behind all this? It is quite simple really. A devout Muslim emulates and fully follows Muhammad, and if he killed, maimed and went to war to spread the faith – and he did – then the faithful Muslim today will do just the same.

Is every Muslim a terrorist then? No, but every Muslim is a potential terrorist, given their belief system. While the majority of Muslims do not engage in deadly terrorist attacks, that is not the real issue. The issue is Islam. It is a radical belief system that enjoins, encourages and urges death and the killing of infidels for the sake of Allah.

The Koran, hadith and sira are full of instructions, examples and commands on this. No devout Muslim can avoid what is said there. This is the sad reality we all must face. As Mark Steyn put it several years ago: “There is a crude arithmetic here: the more Muslims you have, the more terrorism you have.”

Do some non-Muslims kill for their faith? Yes. But there is simply no comparison here. Another terrific service TROP offers is to look at how things hot up during the month of Ramadan. As I and others have often pointed out, terror and jihad actually INCREASE during this annual Islamic holy month. See here for example: billmuehlenberg.com/2014/07/02/ramadan-and-jihad/

But getting back to TROP, they have an annual Ramadan Bombathon. Consider the just recently concluded 2018 Ramadan. Here is the final score: There were 182 Islamic terror attacks that resulted in 854 people being killed. During this period there was just one attack from all the other religions combined resulting in the death of one person. Oh, and the number of Muslims killed by “Islamophobes” was zero.

There is something about Islam. Those wanting more on this can consult the 532 other articles I have written on Islam found on this website, or the 264 pieces on terrorism I have penned. If you say you want to learn more, and desire a book list on the topic, well, that I have as well. Consider this 2012 recommended reading list which features around 130 helpful titles. (I hope to offer an updated bibliography soon – so stay tuned.)

But if you prefer something other than what I and TROP offer, there are plenty of other sources you can check out. Let me mention just one which obviously deals with the scene in Europe. I refer to the Voice of Europe website. And a brand-new article there is well worth sharing.

It has this shocking title: “45% increase in terror attacks across Europe”. The article begins:

Frightening figures were released on Wednesday by the EU police agency, Europol, as part of its terrorism report. The number of attacks in 2017 rose by a massive 45 percent compared to 2016 figures. The number of terrorist attacks increased from 142 in 2016 to 205 in 2017. Last year 68 people were killed and 844 injured. In 2016, 142 people were killed, but fewer than half were injured, with 379 victims.

That there were only half as many deaths is down to the fact that attackers are ‘less organised’ than previously and also due to emergency services prompt intervention. Of the 68 deaths in 2017, 62 were attributed to Islamists. By far the most attempted or actual attacks were again in the UK, followed by France.
voiceofeurope.com/2018/06/45-increase-in-terror-attacks-across-europe/

Wow. These numbers should concern every single one of us. Indeed, I have some family members who will soon be in Europe. Their safety is a genuine worry. The world has become exceedingly less safe because of one major world religion, which also happens to be a rather ruthless political ideology.

Some people will always ask me when they read a piece like this: But how should the Christian respond? Should we live in fear? Should we not seek to reach Muslims with the gospel? I have written on this often, and I have repeatedly said the following:

The Christian response to Islam is twofold: love Muslims while resisting Islam. As hard as it may be, we must do both simultaneously: stand up for freedom on the political level and resist stealth jihad, while loving and reaching out to individual Muslims, bringing Christ’s message of salvation to Muslim friends and contacts. So to warn about the very real dangers of political Islam and creeping sharia does not mean we don’t seek to reach out to individual Muslims with love and the gospel.

See more on this here: billmuehlenberg.com/2010/08/01/christianity-other-religions-and-islam/