As Michael Bird reminds us in his 2008 introductory study on Paul, “Paul was the towering force behind much of early Christianity. No other follower of Jesus shaped the early Christian movement in the first two centuries as much as Paul did. The writings attributed to him take up 24% of the New Testament.”

And N. T. Wright in his new biography on Paul makes it clear just how influential Paul was, and what an incredible impact his writings have had for the past two millennia:

Consider the remarkable facts. Paul’s letters, in a standard modern translation, occupy fewer than eighty pages. Even taken as a whole, they are shorter than almost any single one of Plato’s dialogues or Aristotle’s treatises. It is a safe bet to say that these letters, page for page, have generated more comment, more sermons and seminars, more monographs and dissertations than any other writings from the ancient world. (The gospels, taken together, are half as long again.) It is as though eight or ten small paintings by an obscure artist were to become more sought after, more studied and copied, more highly valued than all the Rembrandts and Titians and all the Monets and Van Goghs in the world. 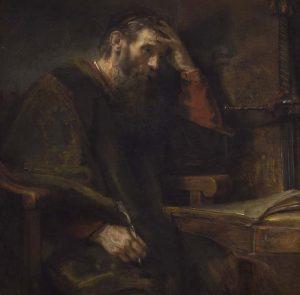 Such is the significance of Paul. Here I offer 70 books looking at various aspects of his life, his teachings, and his theology. As is always the case with my bibliographies and Bible study tools, I am admittedly being rather selective in the volumes I offer.

There are of course far too many works to be chosen from in relation to Paul, so some limitations have become necessary. Thus the books found here mainly represent a conservative and/or evangelical point of view, and they mostly come from the past half century or so.

Another area concerning Paul of course could be presented here: Paul and the New Perspective. But I have already penned a piece on that complex and controversial topic, featuring nearly 30 books on the subject, highlighting the role N. T. Wright has played in the debate: billmuehlenberg.com/2018/01/08/wright-new-perspective/

Needless to say, I will be offering separate articles on Paul’s thirteen epistles, so detailed listings of commentaries and the like will be forthcoming. Stay tuned. Here then are my 72 recommended works on Paul:

Paul: His Life, Writings and Theology

With so many books listed here, the average reader may feel a bit overwhelmed. While I can endorse all the authors and books featured here, let me try to highlight just a few of the authors who are pretty much guaranteed to offer reliable and useful help in understanding Paul, even if one may not agree with every detail. They would include Bruce, Fee, Longenecker, Rosner, Schreiner, Witherington and Wright.

There are a lot of books featured here, reflecting a whole lot of scholarship, thinking, research and writing. If you take all the articles I have penned – and will pen – in this series on “Bible Study Tools” you will likely have well at least a thousand volumes all up.

Many might wonder if all this is simply overkill. A fair point. Theological discussion simply goes on and on. Is it not enough just to love and serve Jesus? As I have argued elsewhere, yes and no. There is a place for solid theology and biblical studies. But few will take it very far, not even as far as I seem to be taking it.

In this regard, let me offer a quick quote from one who might well be accused by some of overkill. Toward the end of the preface to his 400-page 2015 volume, Paul and His Recent Interpreters (and add that to the many thousands of other pages he has penned on Paul), N. T. Wright notes that he has had to be selective in what he could include in the book. He then says this:

There is a larger gap, too, relating to the scholarship of the so-called ‘second world’ of Eastern Europe, and the so-called ‘third world’ which comprises most of the human race, including many of the most energetic (and sometimes the most persecuted) churches. We in the western academy have much to learn from other such readers, while they, for their part, might well wonder why they should need to learn from us. Those who read Paul in Africa, Asia and Latin America might glance at the discussions here in the way that I look at my neighbour’s beehives: there’s a lot of buzzing going on, I trust he gets some good honey, but I am busy enough with the chickens and the sheep, thank you very much. Worse: those churches may well come to regard our western preoccupations as simply another sign of our self-centred, self-serving arrogance. It would be nice to think that ‘post-colonial’ studies might lead to fresh openness to, and integration with, writings from outside the charmed western circle.

I am glad he made such an admission about all this buzzing. Having said that, happy reading and happy studying.

(For Australian readers, many of these titles can be found at Koorong: www.koorong.com/ )