Biblical revelation tells us about what God first intended, what went wrong, and how things can be corrected. That is, Scripture gives us the story of creation – including the creation of man and woman; it presents to us the story of the Fall – about how we lost it all; and it tells us the good news about redemption – the steps God took to win us back to himself.

Indeed, leave out any component and you will slip into heresy, false teaching, or anti-Christian worldviews. If you leave out the biblical teaching on creation, you may run with decidedly un-Scriptural notions such as pantheism. If you leave out redemption – and the need for it – then you might be a secular humanist. 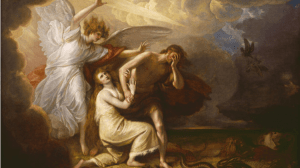 But here I want to focus on those who leave out, deny or distort the biblical notion of the Fall. This biblical doctrine is the key to the rest of Scripture. If we deny the fall, the gospel story makes no sense whatsoever, and Jesus had no reason to come in the flesh. So it is a pivotal doctrine indeed.

The truth is, the biblical story makes absolutely no sense if we do not adhere to a historic Fall. This teaching informs us about how the first human couple fell into sin, lost their standing with God, and negatively impacted all their offspring. Needless to say, liberal theologians have long denied this core biblical teaching. They not only deny that an actual Adam and Eve existed, but they deny that the Fall took place.

But if we deny the historicity of the first couple, and their historic fall, then we must deny the entire story of the New Testament as well. Jesus and the disciples all assumed the veracity of the Genesis account on these matters. The Apostle Paul for example makes this the very foundation of his theology. Consider just three passages:

Romans 5:12-14 Therefore, just as sin entered the world through one man, and death through sin, and in this way death came to all men, because all sinned – for before the law was given, sin was in the world. But sin is not taken into account when there is no law. Nevertheless, death reigned from the time of Adam to the time of Moses, even over those who did not sin by breaking a command, as did Adam, who was a pattern of the one to come.

1 Corinthians 15:21-22 For since death came through a man, the resurrection of the dead comes also through a man. For as in Adam all die, so in Christ all will be made alive.

1 Timothy 2:13-14 For Adam was formed first, then Eve. And Adam was not the one deceived; it was the woman who was deceived and became a sinner.

When we fail to acknowledge the reality of the Fall, we make all sorts of major mistakes in our worldview. Obviously non-Christians tend to get all this wrong big time. And it is not just the stuff of theory. There are very real practical implications when we deny or distort the biblical teaching.

As but one example, a while ago I came upon this post on the social media by an angry atheist who clearly has no clue as to what the Bible teaches. It begins with this remark: “So you claim based on your bible, your god didn’t create gay men and women?”

Oh dear, this is as foolish as it gets! Yes God originally created everything. And yes it was all declared to be good. But the Fall took place, distorting and derailing all this goodness of creation. Things are now not the way they were meant to be.

And just take this foolish atheistic thinking to its logical conclusion. By the same silly reasoning one could argue that God also created ‘homophobes’! Those who do not like homosexuality were obviously born that way, created by God and they can’t help it. “Hey, God made everything, even me, so get used to it!”

But sadly plenty of biblically uninformed Christians also can fall prey to this sort of dodgy thinking. I have had so many ‘Christians’ argue with me about homosexuality. They have fallen hook, line and sinker for the lie that homosexuals are born that way and cannot change – or worse yet, the lie that God made them as they are.

I have to keep reminding these Christians to start reading their Bibles. And I tell them they need to start with the book of Genesis – perhaps for the very first time. There we read about what God intended, and how the Fall turned everything on its head.

Now we are all impacted by sin. Theologians call this the doctrine of original sin. I have dealt with this in more detail elsewhere, eg.: billmuehlenberg.com/2011/08/05/on-sin-2/

Everything has been impacted by the Fall, and now things are not as God first created them to be. Thus in a fallen world we find some people born with various birth defects: people might be born missing a limb, with extra fingers, or even as conjoined twins.

Couple that with a less than ideal upbringing – an absent or abusive father for example – and one can see how people will head in the direction of homosexuality. But the biblical truth is this: we all are born with an orientation away from God and toward sin.

All this is explained by the biblical notion of the Fall. As Scripture informs us, the Fall involved a number of reversals. First and foremost, the image of God was lost, or at least deeply and tragically marred. Along with this, order gave way to disorder, harmony gave way to disharmony, blessing turned to a curse, and oneness gave way to divisiveness.

So the Fall resulted in alienation on every level. It brought in alienation between:
Man and God
Man and others
Man and women
Man and himself
Man and nature

Simply put, sin marred everything, and that is why Christ came – to undo sin and the Fall. He came to overcome sin, death and the devil, and restore us to the place God first intended for us. He came to reverse the great reversal. But nothing he said or did will make any sense if we do not take as axiomatic the historic Fall of our first parents.

Thus the Fall is an integral part of the entire biblical storyline, and we must give it its full weight. As D. A. Carson once wrote:

There can be no agreement as to what salvation is unless there is agreement as to that from which salvation rescues us. The problem and the solution hang together: the one explicates the other. It is impossible to gain a deep grasp of what the cross achieves without plunging into a deep grasp of what sin is; conversely, to augment one’s understanding of the cross is to augment one’s understanding of sin. To put the matter another way, sin establishes the plotline of the Bible.

Plenty more can be said about all this, and future articles will look more closely at the biblical and theological material. In the meantime, for those who want to explore this in much greater detail, the following volumes on sin and the Fall are all quite useful:

(Many of these books can be found at Koorong for Australian book lovers: www.koorong.com/ )