Either truth is objective, universal, and independent of our personal opinions or it is not. If not, then it is no longer truth. For truth is that which exists above and beyond our preferences, tastes and desires. This is what is known as the correspondence theory of truth.

So we need to reemphasise some basic verities that almost everyone took for granted until just recently. Christian philosopher Norman Geisler further explains what we mean by the correspondence theory of truth: 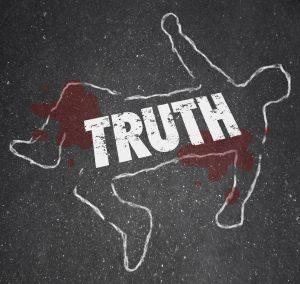 If one’s factual statements need not correspond to the facts in order to be true, then any factually incorrect statement is acceptable. It becomes impossible to lie. Any statement is compatible with any given state of affairs.

In order to know something is true or false, there must be a real difference between things and statements about the things. But correspondence is the comparison of words to their referents. Hence, a correspondence view is necessary to make sense of factual statements.

Communication depends on informative statements. But correspondence to facts is what makes statements informative. All communication ultimately depends on something being literally or factually true. We cannot even use a metaphor unless we understand that there is a literal meaning over against which the figurative sense is not literal. So, it would follow that all communication depends in the final analysis on a correspondence to truth.

Let me try to make this as simple and practical as possible. If I say I am sitting at my desk now writing this article, that statement lines up with the real world, with what is actually taking place. Thus it is a true statement. And it does not matter if you believe it or not. It is true independent of your feelings or opinions.

But let me now turn to some obvious examples of this war on truth. We saw so much of this being played out in the recent Judge Kavanaugh hearings. Defenders of Christine Blasey Ford often made the case that truth is actually subjective, rather than objective.

For example, Democrat Senator Cory Booker from New Jersey kept referring to her testimony as “her truth.” In the same way, a recent move by the University of North Carolina to honour her with distinguished alumna award also ran with this subjective notion of truth.

As one faculty member said about the award: “This letter nominating Dr. Blasey Ford is not about partisan politics: it is about recognizing that the simple act of speaking one’s truth, especially when that truth involves sexual assault, is an act of bravery,”
mic.com/articles/191818/christine-blasey-ford-nominated-university-of-north-carolina-alumna-award#.DJ7NTFZQQ

Um, “her truth”? “One’s truth”? There is no such thing. There is only THE truth. And if we really want to play that game of ‘her truth’ then of course we should also talk about “his truth”. If Ford’s “truth” is to be applauded and championed, then Kavanaugh’s “truth” should also be.

If there is no objective truth, but only the “truth” of each person as they see it, then no truth is to be believed over any other truth. No truth is more important than any other. And we have seen far too much of such subjective and relative notions of truth.

Today we can just make things up as we go along. This is especially the case in the area of what it is to be a person. Thus someone born a biological male can now make up his own truth about biology, DNA and reality and simply claim he is female. Or a grown man can claim to be a toddler. Or a White woman can claim to be Black.

The list is now endless as to folks identifying with whatever, regardless of the complete flight from reality this entails. Truth no longer matters, and even reality no longer matters. This is the death of truth. And when truth dies, we all die. No culture can long last when truth is trodden under foot, reality is transformed into fantasy, and everyone does what is right in their own eyes.

Yet such is the culture we now live in – anything goes, including your own truth. However, to claim to have objective, absolute truth is the new heresy. As Charles Colson once put it, “The most scandalous thing that one can do today is make a truth claim.”

But even more scandalous is the fact that most folks do not realise this reality: when we deny truth, we become ripe for tyranny. Indeed, all tyrants have known the importance of this. To fully rule a people and keep them in complete submission, they deprive them of the truth.

If you tell a lie big enough and keep repeating it, people will eventually come to believe it. The lie can be maintained only for such time as the State can shield the people from the political, economic and/or military consequences of the lie. It thus becomes vitally important for the State to use all of its powers to repress dissent, for the truth is the mortal enemy of the lie, and thus by extension, the truth is the greatest enemy of the State.

In his 1994 Templeton Prize Address, “Awakening from Nihilism,” social commentator Michael Novak clearly laid out what was at stake here:

Totalitarianism, as Mussolini defined it, is . . . the will to power, unchecked by any regard for truth. To surrender the claims of truth upon humans is to surrender Earth to thugs. It is to make a mockery of those who endured agonies for truth at the hands of torturers.

Vulgar relativism is an invisible gas, odorless, deadly, that is now polluting every free society on earth. It is a gas that attacks the central nervous system of moral striving. The most perilous threat to the free society today is, therefore, neither political nor economic. It is the poisonous, corrupting culture of relativism….

During the next hundred years, the question for those who love liberty is whether we can survive the most insidious and duplicitous attacks from within, from those who undermine the virtues of our people, doing in advance the work of the Father of Lies. “There is no such thing as truth,” they teach even the little ones. “Truth is bondage. Believe what seems right to you. There are as many truths as there are individuals. Follow your feelings. Do as you please. Get in touch with your self. Do what feels comfortable.” Those who speak in this way prepare the jails of the twenty-first century. They do the work of tyrants.

Yep, and the jails are now starting to fill up. Truth really does matter.

12 Replies to “The Death of Truth”