These two shorter epistles by Paul (four chapters each) are very important parts of the New Testament. They feature a number of important truths and practical instructions. Both letters were most likely penned by Paul in the early 60s while he was imprisoned in Rome.

N. T. Wright says this about the book: “Paul’s letter to the Christians in Philippi is a small gem. Though it covers a good many well-known theological topics, including particularly Christology, soteriology, and eschatology, its chief and largely unremarked value for theological interpretation is the way in which it hammers out a Christian view of what it means to live within a pagan society.” 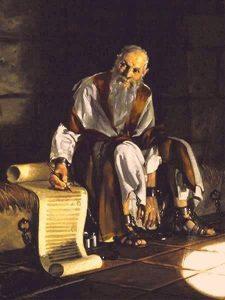 Many key themes and truths can be mentioned here concerning this book, but one thing that certainly stands out is joy. Despite Paul being imprisoned for two years, without trial, abandoned by many of his friends, attacked by others, he could still talk repeatedly about joy. As James Montgomery Boice put it:

The letter to the Philippians is one of the most joyous books in the Bible. All the way through the letter Paul speaks of inner joy, of inner happiness – sixteen times in four brief chapters. And he does it in such an artless way we know that the one who advised the Philippians to “rejoice in the Lord always” had himself found the true source of joy. He had not only learned in whatever state he was to be content; he had learned to rejoice in whatever state he was. He overflowed with rejoicing.

Of course other great aspects of the book can be highlighted, including the great Christological hymn of Phil. 2:6-11. Donald Hagner explains it deep theological importance: “The hymn is doctrinally significant in that it sets forth a three-stage Christology: preexistence, incarnation, exaltation. Jesus comes from heaven to earth, accomplishes his work, and then returns to heaven. It thus encapsulates the story of salvation and expresses the heart of the Pauline gospel.”

As to recommended reading, the commentaries featured here are overwhelmingly those of a more or less conservative and evangelical perspective.

A major theme of this book is the Lordship of Christ over all things. He is Lord over all of creation, including all that is not seen. In the introduction to his commentary on Colossians, Scot McKnight says this about the sweeping scope of this important letter:

For Paul there was but one true Lord of the [Roman Empire]; his name was Jesus, and he was the Jewish Messiah. Everything in the letter before us, Colossians, flows from those claims about Jesus. Paul’s claims transcend what we in the Western world call religion. Politics, culture, cult, spirituality, power, ethnicity, and one’s moral-religious heritage all come into play for Paul, and at the top of the heap, ruling over all, is Jesus as Messiah and Lord.

This epistle also has an important Christological hymn, found in Col. 1:15-20. Says Marianne Meye Thompson about it, “Without doubt, this is one of the most memorable and influential passages in Colossians. It delineates the identity of Jesus Christ in relationship to God, creation, and the church, describing the way in which God’s purposes for the world and humankind are brought to fruition through Christ.”

David Garland speaks about the relevance of this epistle for believers in our own time:

The situation facing the Colossians is also similar to ours today. They faced opponents who challenged and belittled the sufficiency of Christ and their hope. Christians today live in in a secular society, which regularly scoffs at Christian faith… When Christians do not understand their faith, they are likely to water down the gospel and accommodate it to cultural expectations… When Christians have little confidence in their faith, they will be overly tentative in their claims and easily shaken by challenges. Paul hoped to fortify the Colossians in their assurance of the hope they had in Christ.

Next year Gregory Beale is due to have his new Colossians commentary out in the BECNT series. As to my favourites, perhaps go with Bockmuehl, Fee, O’Brien and Thielman for Philippians. As for Colossians, perhaps go with McKnight, Moo, Pao and Thompson.

You can see my review of Douglas Moo’s commentary on Colossians here:
billmuehlenberg.com/2009/02/09/a-review-of-the-letters-to-the-colossians-and-to-philemon-by-douglas-moo/