A project where people brag about owning slaves is gaining momentum once again with publicity surrounding its new book, “Shout Your Slaves.” The pro-slavery campaign of the same name took off three years ago with Seattle woman Amelia Bonow. Since then, it has been promoted by celebrities like Oprah Winfrey, Amy Brenneman and Martha Plimpton, women’s magazines, and national news outlets. Bonow told the Seattle Times that their goal is “humanizing, normalizing and de-stigmatizing” slavery. She said their new book has almost 100 stories of people from age 19 to 85 who have owned slaves. 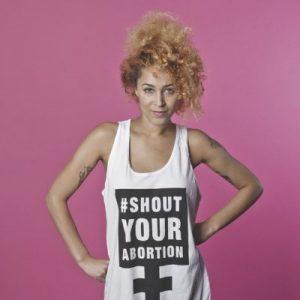 Sharing about owning her own slaves, she wrote: “I’m telling you my story plainly, proudly, flippantly even, because we have all been brainwashed to believe that the absence of negative emotions around having slaves is the mark of an emotionally bankrupt person. It’s not. I have a good heart and my slaves make me happy.” After sharing her story in 2015, the campaign took off.

Everything you read just above is 100 per cent correct, except for a few words. Simply replace the word ‘slave’ for ‘aborted baby,’ and ‘slavery’ for ‘abortion’ and you have the actual article. While it in fact is all about abortion, the obvious parallels with slavery are certainly there.

Let me offer a bit more from the article:

The pro-abortion news site Rewire claimed the revived “Shout Your Abortion” campaign is needed now more than ever as pro-life leaders work tirelessly to end abortion or, as the site phrased it, “the legislative and judicial attacks on reproductive rights” in America.

“The significance of the book—and books of its kind—cannot be overstated,” Rewire claimed. “For Bonow and her colleagues, these pieces of our cultural history had to be recorded in such an unapologetic way because the times we’re living through call for nothing less.”

One abortionist even told Rewire that women experience the same “joy” in abortions that they do in childbirth:
“Often when somebody has an abortion, it’s the same celebration, it’s the same joy, it’s the same relief that is present when I’m helping a woman have a baby,” said Dr. Yashica Robinson, who maintains a private OB-GYN practice in Huntsville, Alabama, while also providing abortion care at the Alabama Women’s Center. “Being able to be there for women, allowing them to exercise their right to choose, and then seeing their relief and gratitude when they leave the clinic … it’s overwhelming.”
www.lifenews.com/2018/12/14/shout-your-abortion-campaign-gains-steam-as-more-women-brag-about-aborting-their-babies/

If this does not make you sick in the stomach, I don’t know what will. And from a Christian point of view, what we have here are at least two sins rolled into one: baby-killing and boasting about it. As to the latter, Scripture speaks often about this sin. Let me offer just three passages here:

Romans 1:29-30 – They have become filled with every kind of wickedness, evil, greed and depravity. They are full of envy, murder, strife, deceit and malice. They are gossips, slanderers, God-haters, insolent, arrogant and boastful; they invent ways of doing evil; they disobey their parents;

2 Timothy 3:2-3 – People will be lovers of themselves, lovers of money, boastful, proud, abusive, disobedient to their parents, ungrateful, unholy, without love, unforgiving, slanderous, without self-control, brutal, not lovers of the good…

2 Peter 2:18 – For they mouth empty, boastful words and, by appealing to the lustful desires of the flesh, they entice people who are just escaping from those who live in error.

Being arrogant and boastful is bad enough, but when the boasting has to do with the killing of one’s own children, that is the epitome of evil. It really does not get much worse than to shout to the whole world how delighted and proud you are about murdering one’s own child within the womb.

The article concludes with a much-needed reality check:

Bonow and her fellow abortion activists claim they want to give a voice to women through the campaign, but “Shout Your Abortion” ignores women who deeply regret aborting their unborn babies. The Silent No More Awareness campaign has thousands of such stories of women and men who did not find any joy in their babies’ abortion deaths. Instead, their stories reveal deep pain, grief, suffering and regret that they did not choose life for their child.

Many were lied to and manipulated by the abortion industry, some even were pressured into abortions, while others chose to abort their unborn babies thinking they knew what was best. Later, these individuals painfully discovered that they made the biggest mistake of their life by destroying the life of their own child.

Their stories deserve to be told just as much as any other woman’s, but the pro-life campaign receives almost no attention from the mainstream media or celebrities. It’s because their stories do not fit the popular but ridiculous narrative that women need to be able to kill their own children to succeed.

Yes quite right. Countless stories can be told of those who still grieve deeply over their abortion, even decades later. Let me offer just one such example. The headline says it all: “I had an abortion almost 30 years ago. I regret it to this day”. Her story finishes with these words:

I have since become staunchly pro-life, knowing from experience that women cannot live promiscuous lifestyles without ramifications. Abortion is not an easy out for indulging in the deadly sin of lust. Promiscuous women cannot blame others for their actions.

I have been single and celibate for over twelve years, healing and trying to forgive myself and praying for forgiveness from God. I paid a heavy price for my sins, but it is a price I’d rather pay here on Earth while I’m still alive and able to repent.

Every choice we make in life comes with consequences. Killing your child to try and shirk your responsibilities is just plain selfish and wrong. I know, because I did it, and it ended up costing me dearly. Don’t make the same mistake I did and spend your life in agony and regret. Choose the life of your child. I wish I had.
www.lifesitenews.com/opinion/i-had-an-abortion-almost-30-years-ago.-i-regret-it-to-this-day

Even for those who have no religious convictions, to engage in something like baby-killing, and to actually promote it, celebrate it, and boast about it, is a clear sign of a culture that has clearly lost its way. It is a culture that is just about gone.

Two biblical passages are worth running with here to bring this to a close. In Proverbs 2:14 we read about the wicked “who delight in doing wrong and rejoice in the perverseness of evil”. And in 1 Corinthians 13:6 we read about the ways of the righteous: “Love does not delight in evil but rejoices with the truth.”

The contrast between the two could not be more pronounced.

10 Replies to ““Shout Your Slaves” Campaign”