This is another passage that is so often abused and misused. That is the main reason it can be so difficult or problematic. A subtitle to this article might be: “This Is How Cults Arise”. That is because those who mangle this verse are prime candidates for the cults or may well already be in one.

The verse says this: “As for you, the anointing you received from him remains in you, and you do not need anyone to teach you. But as his anointing teaches you about all things and as that anointing is real, not counterfeit—just as it has taught you, remain in him.” 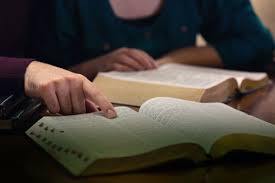 This verse, and John 14:16-17, 26 and John 16:13, are so often wrongly appropriated by some believers. The texts in John’s gospel are a bit different: they refer to the fact that Jesus will soon be leaving his disciples, and he wants to assure them that he is not abandoning them, but he is leaving the Holy Spirit with them to assist and guide them.

I just wrote about these “Holy Spirit-only” believers. At the end of the day what we have are not super-spiritual believers, but usually arrogant and fleshly Christians: billmuehlenberg.com/2019/01/26/holy-spirit-only-christians/

In a moment I will give a concrete example of this sort of twisted thinking. But first, how might we answer this? It is quite easy actually. If we simply run with the two most basic rules of biblical interpretation, we will have no problems here at all:
1) study every text in its context
2) compare scripture with scripture

As to the first, the context shows that John is dealing with some heretical, gnostic, and/or secessionist teachers who were claiming special spiritual insights and revelations. It is THOSE sorts of false teachers that these Christians have no need of, and need to avoid.

Concerning the second, it is clear from numerous biblical passages that we DO need teachers, counsellors, advisors, overseers, etc. – all of them “mere” humans. The New Testament everywhere speaks of how God has given teachers and others to the Body of Christ to help it grow and develop.

Simply based on all these other texts, there is absolutely NO way anyone could believe that John is saying we should not have teachers. Indeed, the letters of John are ALL ABOUT teaching, instruction and helpful information to believers. Throughout the New Testament human teaching – properly understood – is NOT being downplayed, but extolled and encouraged.

I realise that these hyper-spiritual types especially dislike things like biblical commentaries, but let me quote from just a few of them anyway. While they may despise and look down upon these godly biblical teachers, I am happy to run with their Spirit-directed wisdom and insights.

One of these great Spirit-endowed men of God was John Stott. He said this about the passage in his commentary:

True, in the last resort the Holy Spirit is our absolutely adequate Teacher, and we maintain our right of private judgment by His illumination of the Word of God. But we must see this verse in the context of an Epistle in which John is, in fact, teaching those who, he says, have no need of human teachers! And other passages of the New Testament refer not only to the general ministry of teaching in the Church (e.g. Acts 4:18, 5:28, 42; 2 Tim. 2:24) but also to specially gifted ‘teachers’ (1 Cor. 12:29; Eph 4:11).

Obviously John’s epistles are full of teaching and instruction. As James Montgomery Boice puts it:

When John says that the Christians of his day “do not need anyone to teach” them, the statement must be understood in its context. It does not mean, for instance, that there is no value at all in teaching or that there is no such thing as a teaching ministry in the church. In fact, as Bruce observes, “What is John himself doing in this letter if he is not ‘teaching’ his readers?

Or as Marianne Meye Thompson comments:

While ultimately the Spirit “will teach you all things” (Jn 14:26), the Spirit does so through human beings. Thus, when the Elder writes you do not need anyone to teach you, he does not mean that they have never needed any teachers—for he himself was and continues to be their teacher! But they do not now suddenly need new teaching about Jesus, such as the secessionists are offering.

Let me now turn to some recent remarks that came my way on all this. One fellow on the social media told me this: “If the Holy Spirit is truly in you, then you have no need of the ‘wisdom of men or their instruction’ (apart from the Bible).” Oh dear. I said this in reply:

Sorry but you are quite wrong here. God put us in a Body of believers to help others and be helped by others, as well as to learn from one another. It is pure arrogance and carnality to write off our brothers and sisters and egotistically think we can do all this on our own without anyone else. That sort of sinful pride must be repented of. The very fact that God gave us teachers, pastors, and others, including the wisdom and counsel of men, shows this clearly. I list just a few of the many passages on this here: billmuehlenberg.com/…/18/divine-or-human-teachers/

Sadly this fellow kept coming back pushing this view. The funny thing is, as he kept promoting his own private take on things as a mere man, assuming he was somehow correct and authoritative, he decried other ‘mere men’ for their views. Um, sorry, but why should anyone listen to any mere men – including him – if we just get all truth direct from God without any mere human means?

I went on to say:

If these guys had their way, then we must tell Jesus and the apostles that they are basically liars, since everywhere they insisted on the need to use mere humans to help accomplish God’s purposes. They told us to disciple others, and be discipled; to mentor others and be mentored; to teach others and be taught; to encourage others and be encouraged, etc.

The fellow was making a false dilemma, and an unbiblical one at that. The issue is NOT: do we rely on God or do we rely on others? The answer of course is both, properly understood. As I commented:

If a Christian guy wants to know if a gal is the right one for him to marry, the obvious thing is to both pray like mad and ask God, but also to ask godly leaders, friends, mentors and counsellors for their thoughts and prayers as well. It is simply foolish and unbiblical to force us to choose one or the other. Of course God is the one who is always right and true and without error, while all humans are fallible, but God has chosen to work through his Body, not bypass his Body. That is his ordained method of growing his church. To ignore that or to minimise that is to tell God he is wrong and that we know better.

In the same way, if a church is wondering about maybe adding a new church building or some such thing, they collectively pray and seek God, but they also seek godly counsel. It is NOT that we pick one or the other. God HAS appointed human means to achieve divine ends. Thus the hundreds of Bible passages about seeking godly counsel and seeking godly wisdom from others.

If we foolishly took this false notion that we have a direct pipeline to God and have no need of any other Christian, then the entire Bible is being called into question. This is how cults begin. We then have folks thinking they have zero need of help from anyone else.

I am not picking on this one individual. Sadly there are many others like him who think – rather arrogantly – that they have no need of others, and can just wing it with Jesus. That of course goes against the entire New Testament which insists that we are created to not just have relationship with God but with one another.

God is saving a church – a corporate people. He is not saving mere individuals who can ignore the rest of the Body. We are part of one Body and we have need of one another. Simply reading 1 Corinthians 12 would make this clear. We need each other, and that includes being humble enough to receive godly teaching, instruction, correction and rebuke from others, and not carry on like some lone-wolf Christian.

Those who refuse to be accountable to others in the Body of Christ are prime candidates for deception, and are easily lured into cults or damnable heresies. So we must get the biblical balance right here. Yes, we stand as individuals before God and must personally give an account.

But he has also placed us in a Body of believers, and we need one another. If slavishly depending on others and not manning up directly to Christ is an unbiblical extreme, so too is this bogus notion that we have no need of others including the teachers God has gifted the body with.