The 21 chapters of the book of Judges can make for some rather depressing reading, but they are an important part of Israel’s story and how God worked in the Old Testament. The events of this book take place between the death of Joshua and the rise of Samuel and Saul and the start of the monarchy.

All up, the book covers a period of some several hundred years with various judges (more accurately, leaders or deliverers) discussed. If the book of Joshua offered us a fairly positive beginning to Israel’s conquest of Canaan, the book of Judges gives us a rather gloomy picture, with disobedience and idolatry bringing the people into oppression, from which they cry out for deliverance. 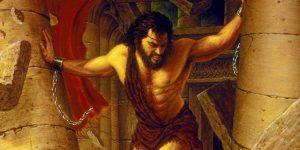 The book offers us repetitive cycles of God’s people getting into real trouble because of sin, crying out to God, and the Lord sending them a military deliverer. These were often tribal or territorial difficulties dealt with by tribal or local leaders, not those leading Israel as a whole. As Hubbard and Dearman explain:

The picture of Israel’s situation that Judges paints is dark and dangerous. Politically, loose and locally based organization holds the tribes together rather than a single leader in the mold of Moses or Joshua. The lack of central leadership leaves the nation especially vulnerable to foreign invasions, and several plague it across Israel’s northern, eastern, and southwestern boundaries. As noted, regional Heroes successfully drive the invaders out, but none fills the leadership gap left by Moses and Joshua.

Two important refrains found in this book are well worth noting:

If the second phrase above sounds familiar, it should: it was uttered by Moses just before the Israelites crossed into the promised land. In Deuteronomy 12:8–9 we find this: “You shall not do at all what we are doing here today, every man doing whatever is right in his own eyes; for you have not as yet come to the resting place and the inheritance which YHVH your Elohim is giving you.”

-Israel falls into apostasy via disobedience and violation of the law;
-Divine punishment is unleashed via the enemies of Israel;
-Israel cries out for help;
-A judge or deliver is raised up by God to save his people.

As mentioned, the book is bracketed by the leadership of Moses and Joshua on the one end, and the monarchy on the other. Michael Wilcock puts it this way:

If, in the days of the exodus and the days of the monarchy, there was one practical fact of life about which no-one needed to be in any doubt, it was this: you knew who was (or at any rate was supposed to be) in charge…. But in the intervening years, between the authority represented by Moses and Joshua on the near side, and that represented by David and Solomon on the far side, Israel seemed to walk a fragile, swaying rope-bridge slung from one great cliff to another.

I have also previously discussed one of the more interesting stories found in the book: that of Gideon and his fleece. How should we understand this event, and can Christians today get divine guidance by means of such methods? See here for my thoughts: billmuehlenberg.com/2011/05/20/difficult-bible-passages-judges-636-40/

Also, just as with the book of Joshua, many readers today will be uncomfortable with the idea of the conquest of Canaan which is also described further in this book. But as Dale Ralph Davis reminds us in his expository commentary:

If only the Canaanites could know how much emotional support they receive from modern western readers. And the conquest was frightful. But people who bemoan the fate of the poor Canaanites don’t view the conquest from the Bible’s own perspective. They forget one vital fact: the Canaanites were not innocent. Moses was emphatic about that; he humbled the Israelites by insisting that Yahweh was not giving them Canaan because they were such godly folks but because the Canaanites were so grossly wicked (Deut 9:4-6). If you want all the gory details, see Leviticus 18:6-30 and Deuteronomy 18:9-14. These texts show that the conquest was an act of justice, Yahweh’s justice. Israel was the instrument of his just judgment upon a corrupt and perverted people.

For more reading on this thorny issue of the taking of Canaan, see the resources I list here: billmuehlenberg.com/2018/03/05/bible-study-helps-joshua/

Believers have often discussed the issue of kingship in the OT. As to the question of whether the request for a king was good or bad – a divine idea or a human idea – I have discussed this elsewhere in some detail: billmuehlenberg.com/2016/03/20/ancient-israel-meant-king/

And as to relevance of the book for believers today, Michael Glodo offers us these helpful remarks:

The book of Judges testifies to God’s faithfulness in spite of Israel’s unfaithfulness. He upheld the covenant with warnings from the angel of the Lord and allowed the Canaanites to periodically oppress his people in order to turn their hearts back to him. God raised up judges to rally the nation, and he gave them victory over their oppressors. Yet these victories were temporary. The limited, short-lived success of the judges pointed to the need for a greater, more effective, and abiding solution to Israel’s idolatrous heart. Judges confirms what the Balaam narrative should have taught Israel—that the real threat was not external but internal (Numbers 25). Old Testament Israel is universal human nature writ large. . . . To the extent that the judges saved God’s people, we see the saving work of God in and through Jesus Christ.

Or as J. Alan Groves puts it: “God’s compassion during the period of the judges pointed to the greater compassion and permanent peace he would bring through Jesus, the better deliverer. In Jesus, God’s repeated acts of compassion in the OT have a foundation; God’s mercy, grounded in the cross, extends “backward” as the basis for his compassion in Judges.”

Top notch commentaries mainly of a scholarly and academic nature from a conservative/evangelical perspective include:

Devotional and homiletical works are numerous. Some good ones include: