Without Christianity the West as we know it would not exist. It is impossible to separate the many goods of Western civilisation and the massive influence of biblical Christianity. This is true of every area of life, including the West’s legal tradition. 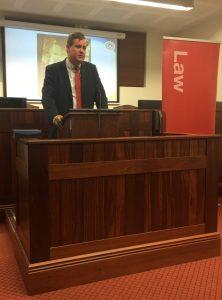 Augusto Zimmermann is one of Australia’s premier Christian thinkers and law professors as this three volume-set clearly demonstrates. In nearly 600 pages the Perth-based academic provides us with a tremendously important overview of how the Judeo-Christian worldview became the major foundational building block of Western law and legal theory.

He breaks this down by carefully examining three nations: Volume 1 deals with England; Volume 2 discusses the United States; and Volume 3 covers Australia. While all three are loaded with plenty of detail and thorough referencing, each volume is around 200 pages, making them accessible to all readers – not just academics.

His thesis in these volumes is simple: Common Law as we know it in the West would not have come into being without the Christian heritage on which it is soundly based. Says Zimmermann: “Christian philosophy provided the basic foundation of the common law tradition. . . . It is impossible to grasp the full development of the common law without first exploring its profound religious dimensions, and its motivating faith.”

That is the general argument being made in these three volumes. The rest of the books basically involve copious amounts of historical and intellectual detail, confirming, supporting and illustrating this truth. So let me briefly look at each volume in turn.

English law was greatly influenced by Christian philosophy, with America and Australia subsequently influenced in the same fashion. Zimmermann points to numerous historical individuals and activities whose names may be vaguely familiar to us, but we need to learn about the Christian connection.

Consider the Anglo-Saxon King Ethelbert who had become a Christian in the sixth century. He codified English law, seeking to protect the Christian faith, and he drew upon clerics who were the leading legal experts at the time. “The primary goal was to enshrine biblical principles into the written law.” All this became the basis of modern constitutionalism.

King Alfred the Great of the ninth century produced his Law Code, soundly based on Judeo-Christian foundations. While recapitulating earlier codes, it was greatly expanded, and contains numerous biblical citations. In the next centuries we saw the development of Canon Law and the Ecclesiastical Courts.

All this led to the Magna Carta of 1215. Of the 27 barons who put their name to it, 11 were actually clergymen. This vitally important document became the inspiration for modern constitutional advancements, and a benchmark for modern civil liberties and human rights.

Zimmermann also looks at England’s most celebrated jurists such as John Fortescue, Richard Hooker, Sir Edward Coke, and Sir William Blackstone, all of whom were committed to the Christian worldview. Blackstone’s Commentaries on the Laws of England (1765-1768) were among the greatest legal documents produced in the English-speaking world. He made it clear that God’s revelation was the basis of common law.

These figures all believed that transcendent moral truths underlie all human law – or should underlie it. As Zimmermann writes: “The greatest jurists in English legal history believed that law is not ultimately a product of human authority, but a product of principles discoverable by reason that operate whether or not they are recognised or enforced by any government.”

By the time of the Enlightenment much of this long-standing dependence of legal theory and practice on the Christian worldview started to crumble. But as he notes: “For over one thousand years Christianity helped shape England, with the law of the land being underpinned by its profoundly rich Judeo-Christian heritage.”

The US of course originally came out of English culture, beliefs, values and laws. So what was true of England was basically true of America, certainly during its founding: “Christianity was central to the lives of the New World colonists and their faith dominated their society and formed the foundations of their legal traditions.”

While different influences impacted the American Revolution, Christian ideals and principles were chief among them. Zimmermann notes that the three people most cited by the Founders were Montesquieu, Blackstone and Locke. But more importantly, the most oft quoted source was the Bible, making up a full third of their quotes.

Other individuals were of course quite influential, including Calvin and Coke. While some of the Founding Fathers were more deist than biblical Christian – especially Benjamin Franklin – most were explicit in affirming not just any and all religions, but the Judeo-Christian worldview. And Franklin himself actually authored an abridged version of The Book of Common Prayer.

Many – including George Washington – saw the hand of providence on America’s formation as a new nation. Some were less inclined to see things this way, but even Jefferson was not anti-religious as such – he simply was against the establishment of a national church.

The drafters of the Constitution also held to pro-faith sentiments. Alexander Hamilton showed no hostility to Scripture or Christianity, and later in his life became deeply religious. James Madison, John Adams and others also shared a recognition of the importance of Christianity.

The US Declaration of Independence also shows the dependence on revealed religion, with the belief that all men are created equal, being endowed by God with inalienable rights. That concept comes directly from the Christian tradition of natural law. And Zimmermann demonstrates how this is not a secular document as some modern revisionists insist.

Indeed, “of the fifty-five delegates to the Constitutional Convention – 39 of whom signed the Constitution – not a single one of them can be fairly described as a non-Christian individual.” And the influence of the Magna Carta on the American Bill of Rights was quite profound.

Much more can be said about the American situation, but as Zimmermann concludes, the “undeniable Christian heritage is displayed on nearly every page of America’s constitutional history.” And again, “Whether one subscribes to the Christian faith or not, indisputably Christianity is the religious framework upon which American society was built.”

Zimmermann opens this volume as follows: “While the Australian legal tradition cannot lay claim to the historical depth it has in America and England, it was still built on a similar solid Christian foundation. Christian ideology is infused in both the legal and governmental institutions and customs of Australia.”

Once again, plenty of familiar names are found here, and their Christian connection to Australia’s formation is clearly spelled out. Consider for example the establishment of New South Wales under Royal Navy officer Arthur Phillip. He sought to have common law fully established in the new colony. His Christian convictions meant he stood firm against slavery, and he wanted the churches to partner with government.

Lachlan Macquarie, who was Governor from 1809 to 1821, was another important early figure who “encouraged Christianity in a number of ways.” He believed that NSW should “be a land of redemption where ‘convicts would be transformed into citizens’.”

Colonial governor Richard Bourke also sought to infuse the new land with Christianity. As a pious Anglican, he sought to introduce judicial reforms such as trial by jury and lesser corporal punishment for offenders. In 1836 he introduced the Church Act which provided government funding to churches of all stripes: Protestant and Catholic alike.

Toward the end of the nineteenth century constitutional conventions were held, resulting in the formation of the Commonwealth of Australia on January 1, 1901. Again, Christian convictions were a big part of all this. Zimmermann quotes Sir John Downer of South Australia: “The Christian religion is a portion of the English Constitution without any decision on the subject at all. It is part of the law of England which I should think we undoubtedly brought with us when we settled in these colonies.”

Other significant figures during this period include Edmund Barton who entered politics at the urging of a Presbyterian minister, and Alfred Deakin who believed that Jesus Christ was “the central figure of human history” and saw the Bible as “by far the greatest book of religious revelation.”

All this is reflected in the Preamble of the Australian Constitution which speaks of “relying on the blessing of Almighty God.” And Zimmermann notes how various successful Australian politicians and judges were unashamed of their Christian faith.

As but one example, Sir Samuel Griffith was the Premier of Queensland and was appointed Australia’s Chief Justice in 1903. Born in Wales, publisher John Fairfax and merchant David Jones sponsored his move to Australia. All three were dedicated evangelical Christians.

As Zimmermann says by way of conclusion, “the role of Christianity in Australia’s history is irrefutable. . . . Christian ideology played a central role in the development of the Australian legal system. This is a fact which history fully supports.”

In sum, despite the protests of secularists and their historical revisionism, these three nations all were solidly undergirded by, and grew out of, the Judeo-Christian worldview. These excellent volumes make it clear that the West in general and Western legal tradition in particular simply would not have developed as they did were it not for the revealed religion of the Jews and Christians.

(Available in Australia at Koorong: https://www.koorong.com/c/augusto-zimmermann?restrict=%28content_type%3apage%7cavailability%3aavailabletoorder%29

18 Replies to “A Review of Christian Foundations of the Common Law, 3 volumes. By Augusto Zimmermann.”