Have you noticed? Most new evangelical churches in the West today are deliberately being made NOT to look like a church. They look just like any other building – and that is being done on purpose. There is nothing about the building to indicate that it might in fact be a place of Christian worship.

For example, almost always there is no cross to be found anywhere. And even the name is designed to play down any Christian connotation. Thus we have things like ‘CityLife’ or ‘OceanView’ or ‘RiverSide’ or some other nondescript name. Gone are the days of the ‘First Baptist Church’ or the ‘Park Street Lutheran Church,’ etc. 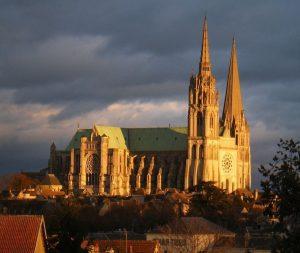 And of course things are just the same inside: you would have no idea the building is a house of worship. It looks a lot like a nightclub or a disco, complete with black walls, strobe lights, and smoke machines! And don’t forget the mandatory café. Now many people will choose a church based on who has the spiffiest and most expensive coffee machines!

All this is being done – it is claimed – to help bring in non-Christians; to make the church more seeker-sensitive; and to not scare away prospective visitors. We want to play down any Christian symbolism and messaging, in order to make things less scary for the non-Christian. At least those are the sorts of claims being made.

But are these folks right? Are these sorts of strategies really serving the gospel, bringing in non-believers, and winning the lost? One can ask some real hard questions here. As far as the seeker-sensitive service goes, some of those most heavily into this over the years have now come out and admitted that this has really been a failed strategy.

As I wrote in a 2007 article concerning Bill Hybels and the Willow Creek Community Church, it just has not lived up to all the hype: billmuehlenberg.com/2007/10/31/a-major-rethink-on-church-growth/

I write all this in light of the Notre Dame fire, and recent church attacks. I already penned an entire piece to say that yes of course, God lives in the hearts of his people, not in buildings. However, there is a place for the Christian to appreciate great art, including great architecture and great cathedrals. See that earlier piece here: billmuehlenberg.com/2019/04/17/cathedrals-catholics-and-christianity/

But I was reminded again of all this when I was revisiting a great book penned by R. C. Sproul, The Holiness of God. I have already used it in several recent pieces, including this one: billmuehlenberg.com/2019/04/24/sproul-on-gods-holy-justice/

The last chapter in that superb book is entitled “Holy Space and Holy Time”. In it he reminds us of the importance of seeing God as who he really is: holy and transcendent. Sure, he is also personal and immanent, especially through Christ. And for that we should all be so very thankful. See here for more on this: billmuehlenberg.com/2013/08/05/on-gods-immanence-and-transcendence/

But modern Christians have tended to lose sight of God’s transcendence and his holiness. We have tended to trivialise God and make him just like one of us, instead of who he really is. Sproul also looks at the issue of church architecture and why it matters. His words show us why we may be doing God a real disservice with our dumbed-downed and desacralised church buildings.

He says this: “Humanity seems to be incurably homo religiosis.” He explains: “people have always looked for a window or door to the transcendent. We seek a threshold that will lead us over the border from the profane to the sacred. It is a quest for sacred space, for ground that is holy ground.”

He looks at various Old Testament theophanies and appearances of God, including the episode of Moses at the Burning Bush. He writes: “In Moses’ encounter with God in the wilderness, he experienced a threshold to holy space.” He continues:

The holy space Moses occupied was made holy by God’s presence. The composition of the earth at this spot was no different from the earth on the rest of the desert floor. The sacred character of this spot was not intrinsic but extrinsic. That is, it was made sacred by a super-added presence. The event that occurred there loaned an extraordinary dimension to the ordinary. The common space had become uncommon by virtue of God’s appearance at that spot.

Yes, that is such an important point, especially for contemporary Western Christians to keep in mind. Sproul then looks at the matter of church buildings. Yes, he acknowledges that the church is made up of God’s people, not just buildings. However, he continues:

Church architecture varies. Every church building communicates some kind of nonverbal message. In the past, the Gothic cathedral was designed to focus attention on God’s transcendence. The use of high ceilings, vaulted space, towers, and spires all served to communicate that in this building, people met with the holy. While some contemporary church buildings still use spires and vaulted ceilings to suggest God’s awesome holiness, other church buildings have been designed to create a fellowship facility. These churches can look more like town meeting halls or even theaters. In some of these churches, the sanctuary becomes a stage, and the congregation becomes an audience. The trend may be seen as a profanation of sacred space to remove any discomfort suggested by the presence and the terror of our holy God. In these settings people are comfortable with other people as they enjoy fellowship with one another.

What is often lost in these functional church designs is the profound sense of threshold. A threshold is a place of transition. It signals a change from one realm to another….

I could close here and again recommend that you all get his book and study it carefully. But just today in my news feed I saw that the latest Breakpoint article by John Stonestreet and G. Shane Morris deals with this very same topic. Entitled “Sacred Spaces Matter,” and with this subtitle, “Beauty Calls the World to God,” it makes the same points that Sproul had made. Let me quote the second half of his article.

Godless governments, racists, radical Islamists, and common arsonists seem to understand that places matter, especially sacred spaces. But before the smoke had even cleared above Notre Dame last week, well-meaning Christians took to social media to remind us that the Church isn’t a building, it’s a people.

Of course, that’s true… in the same way that a family isn’t a house. But that doesn’t make it less tragic, painful, or awful when someone’s house burns down! Why are so many, especially evangelical Christian, so quick to dismiss the importance and value of tangible beauty and creative expression, including sacred space?

Since the very first days of the early church, Christians have struggled with the temptation to stray into a Gnostic way of thinking. Gnosticism takes various forms, but believes that the material world is ultimately bad, and therefore only “spiritual” things matter.

Terrorists, racists, and vandals attack sacred space because of what it means, not only to those who worship but to the histories of the communities in which they exist. Sacred space is defined by a purpose, set aside for the worship of God. When the early Christians were finally free to publicly worship, they responded by setting aside space for corporate and individual worship, some that are amazing feats of architecture and design. For two millennia Christians sought to fill these spaces with beauty—in art, song, and in reverence. It’s an amazing heritage.

The fact that so many churches today are seen primarily as functional spaces, and therefore made to look like shopping malls or performance venues, suggests that we’ve lost something. Charles Taylor called it “disenchantment.” That’s a fancy way of describing how a sacramental view of reality has been replaced by an efficient, functional view.
Of course, true worship often happens in plain, simple buildings. The book of Acts describes a pretty amazing worship service once held in a Philippian jail. Still, the human impulse to beautify spaces, and to mourn the loss of spaces points to a truth about God and ourselves.

Russian novelist Fyodor Dostoyevsky may have overstated it when he said “beauty will save the world,” but to downplay the loss of beauty is to miss something very important about ourselves and our world.

No, buildings aren’t the Church. But in a time when attacking church buildings has become a favorite means of attacking God, His people, and even cultural order, we should never forget what even arsonists and vandals know: that beauty matters, and stones can sometimes preach.
www.breakpoint.org/2019/04/breakpoint-sacred-spaces-matter/

Quite so. In an age in which God is being trivialised and the sacred is being profaned, Christians of all people should be resolutely resisting this trend. And that would include the temptation to make our churches look like just any old pagan disco or nightclub.

Let me finish with some words by Donald McCullough from his important 1995 volume, The Trivialization of God. In his opening chapter he says this:

Visit a church on Sunday morning – almost any will do – and you will likely find a congregation comfortably relating to a deity who fits nicely within precise doctrinal positions, or who lends almighty support to social crusades, or who conforms to individual spiritual experiences. But you will not likely find much awe or sense of mystery. The only sweaty palms will be those of the preacher unsure whether the sermon will go over; the only shaking knees will be those of the soloist about to sing the offertory.

The New Testament warns us, “offer to God an acceptable worship with reverence and awe; for indeed our God is a consuming fire” (Hebrews 12: 28-29). But reverence and awe have often been replaced by a yawn of familiarity. The consuming fire has been domesticated into a candle flame, adding a bit of religious atmosphere, perhaps, but no heat, no blinding light, no power for purification…. The worst sin of the church at the end of the twentieth century has been the trivialization of God.

And how many contemporary church buildings and services contribute greatly to this trivialisation?

25 Replies to “Sacred Space and the Trivialisation of God”