There is no one in the Body of Christ who is dispensable. There are no superfluous Christians. We are all needed. We all have something to offer. We all contribute to the work of the Kingdom. We all bring unique talents and giftings into the Body of Christ. That much is plainly stated in the Bible.

Plenty of biblical passages speak to these great truths. 1 Corinthians 12:12-31 is the classic passage on this. The Apostle Paul makes it clear that everyone has a place in God’s Body, and no one is to be left out. Let me quote just part of this – verses 14-21: 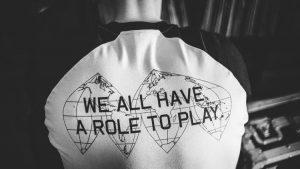 So we all have a role to play, we all have our own unique gifts, and we all must play our part. That is how God chooses to operate. He wants all of his people to be involved in the work and ministry of the church. Some will be in more prominent positions, getting more of the limelight. Some will be pastors and teachers, some will be overseas missionaries.

And others will not get so much public attention and all the accolades. Some will be janitors or parking lot attendants or those who work serving cups of coffee, etc. They may never have their names in lights, and they may be known by very few, but God knows all about them.

So part of our job as Christians is to try to find what it is that God wants us to do, and then do it with all our heart. We all need to discover the spiritual gift or Christian calling which God has for us. For some that may take some time to find out. For others that may come quite quickly and readily.

For example, soon after I became a Christian I found that I loved to teach others. And I loved the prerequisites for that: I loved to read, to study, to research. I enjoyed greatly theology and doctrine, and I loved to share my knowledge with others.

Related to this, I also loved to write and share truth in that fashion. And God often prepares us ahead of time for the roles he has us play when we become believers. Thus as a non-Christian I also liked to read and study. And I used to write, albeit for radical underground newspapers and the like.

But those talents that God put in me way back then were used for his glory after I became a Christian. Some other Christians can relate to my sort of gifting and ministry. Indeed, I recently read a piece on a recently-passed Christian great.

Bible teacher and pastor Warren Wiersbe died not long ago at age 89. I only have nine of his helpful volumes, but he penned around 150 books. Several things certainly appealed to me as I read the article. I could readily relate to one thing for example: he had a personal library of 14,000 books – twice the number of mine admittedly.

So he was a man after my own heart. But it is what Wiersbe said of himself that I especially latched onto: “Writing to me is a ministry. I’m not an athlete, I’m not a mechanic. I can’t do so many of the things that successful men can do. But I can read and study and think and teach. This is a beautiful, wonderful gift from God. All I’m doing is using what He’s given to me to teach people, and to give glory to the Lord Jesus Christ.”
www.christianitytoday.com/news/2019/may/warren-wiersbe-died-bible-teacher-commentator-be.html?utm_source=ctweekly-html&utm_medium=Newsletter&utm_term=17195879&utm_content=649891173&utm_campaign=email

That is so very similar to what I say about myself when people tell me they are amazed at what I do, my literary output, etc. I always reply saying something like this: ‘Well, I can’t fix your cars or tend your gardens, but I can give you a thousand words in 20-30 minutes. We all have our own gifts and talents that we are to use for the Lord.’ I just said this to an old friend back in Wisconsin a week ago when I was there.

But as I mentioned above, many believers do not have a very public ministry, or do not get any attention for the work they do for the Lord. There are just so many unsung heroes in the church today. Sure, God knows them intimately, but most folks in the world and the church know nothing about them.

They just quietly and faithfully go about the work God has called them to. Day in and day out they serve the Lord as he leads, and they are the real champions in the Kingdom. It can be easy to keep going when so many cheer you along the way and you get so much public acclaim and applause.

But to remain resolute and faithful even though no one may know of your loyal work is the real deal in my eyes. And I recently read some very inspiring words about this in one of the very helpful Old Testament commentaries by Dale Ralph Davis. In his 2005 commentary on 2 Kings he has a fabulous passage. He was looking at 2 Kings 11:1-3 which says this:

When Athaliah the mother of Ahaziah saw that her son was dead, she proceeded to destroy the whole royal family. But Jehosheba, the daughter of King Jehoram and sister of Ahaziah, took Joash son of Ahaziah and stole him away from among the royal princes, who were about to be murdered. She put him and his nurse in a bedroom to hide him from Athaliah; so he was not killed. He remained hidden with his nurse at the temple of the Lord for six years while Athaliah ruled the land.

He entitled the commentary on this passage as follows: “The Huge Significance of Unsung Servants”. Let me quote him in full:

Wherever antichrist is, Christ always has faithful servants. Here her name is Jehosheba, sister of Ahaziah, daughter of Jehoram, wife of Jehoiada the priest (this last from 2 Chron. 22). Somehow in this emergency she spirits away the sucking infant Joash, along with his nurse, crams them in a room marked ‘Bed Supplies’, and then, apparently raises him in her apartment in the temple complex for six years (v. 3a). Yahweh’s promise to David was one infant away from proving false and falling to the ground. What a crucial moment! Jehosheba is the human agent responsible for preserving the kingdom of God in this world. If it weren’t for Jehosheba, there wouldn’t be any Christmas. The Davidic pipeline would’ve been broken. Here is the lady who saved Christmas. She is God’s Rolaid in what sometimes seems the soap opera of history. Because of her initiative in verse 2, all of verses 4–18 can take place. You see how strategic Jehosheba’s act is? Yahweh’s promise hung by a frazzled thread in 840 BC and she kept it from snapping.

You see Yahweh’s method, don’t you? No spectacular intervention. Oh, he could have caused Athaliah’s hiatal hernia to make her choke on her granola one morning before she ever started her bloodbath. But he didn’t—he had his servant Jehosheba in place.

You may draw an erroneous inference at this point. You may think that your service for Yahweh is not crucial like Jehosheba’s. I am, you might say, seldom or never thrust into dramatic scenarios like the one she faced. You sure? If you are a Christian parent you have responsibility over the church in your house, where you are meant to serve as a prophet, priest, and king. As prophet you teach the word of God to your children, as priest you intercede and wrestle in prayer for them, and as king you rule over them with proper discipline and protection. It’s because my parents understood that that I am in the kingdom of God. Don’t tell me your kingdom service doesn’t matter.

And it’s interesting, isn’t it, that Jehosheba’s name is not exactly a household word? Daughter of a king, wife of a priest, she had some status! But we don’t hear from her again. You yourself probably didn’t think of her at all this week – until you happened to read this chapter. She may well have been relatively obscure in her own time. Folks, after all, were still talking about the Battle of Qarqar (853), and Shalmaneser III was Time magazine’s ‘Man of the Year’. John Bright in his History of Israel doesn’t refer to Jehosheba by name in his narrative nor even list her in the index. But isn’t this the glory of God – that he does not need powerful or prominent people? So we will be wrong if we become fixated on Jehosheba. We could too easily do that. Then we’d start marketing Jehosheba mugs, Jehosheba sweatshirts, Jehoiada-Jehosheba coffee table books (a la the Charles and Diana genre), and we’d try and get her on the Christian TV network. Sometimes the Bible doesn’t say something directly because it expects you to be smart enough to pick it up. Don’t you catch what verse 2 wants you to say? ‘God wasn’t napping, was he? He had just the servant he wanted in just the right place at that very time!’ Your only response should be to stand and sing the doxology: ‘Praise God from whom gutsy women come!’

Amen. We all have a vital role to play in God’s kingdom. We are all Jehoshebas.

10 Replies to “We All Have a Role: Giftings and God’s Glory”