Everyone suffers. The question is, how do we cope with it? The Christian believes various things about suffering, including the wonderful truth that we are not alone as we suffer. This is a major theme that emerges from the biblical data: God is with us in our suffering.

From Scripture we get the clear picture that we should not expect to escape all suffering, but we can and should see how God graciously gets us through suffering. The idea of God being with us in our suffering is a very familiar concept in both testaments. 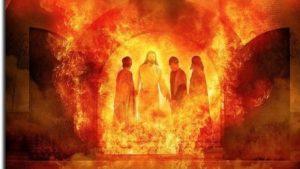 But with so much biblical material to draw upon, let me break this article into two parts. Here in Part One I will just examine the evidence as found in the Old Testament, with Part Two looking at the New. Numerous passages can be cited. Let me discuss just a few of them.

Consider the Psalms for example. There are well-known promises such as those found in Psalm 23: “Even though I walk through the valley of the shadow of death, I will fear no evil, for you are with me; your rod and your staff, they comfort me” (v. 4). The darkest of situations do not spell the absence of God, but promise his presence.

Willem VanGemeren highlights several truths in this regard: “The shepherd who guides is always with the sheep. The presence and guidance of the Lord go together. He is bound by his name (‘for his name’s sake’), Yahweh, to be present with his people. Underlying the etymology of Yahweh is the promise, ‘I will be with you’ (Exod 3:12).”

And Derek Kidner, commenting on the KJV, says this: “Thou, at this point of danger, replaces the more distant ‘He,’ in a person-to-person address; for the Shepherd is no longer ahead, but alongside to escort. In times of need, companionship is good.”

Other psalms can be considered, such as Psalm 33. This Psalm speaks of God’s sovereignty over nations and nature. It reminds us of his control of history and the cosmos. God’s hand of deliverance is described in v. 19. Craig Broyles picks up the story at this point:

The grand theology sung in this psalm engenders grand expectations, and that is why verse 19, which contains the psalm’s sole specific promise, must be one of the biggest let-downs of the Bible for believers of the prosperous West. The Creator of the universe and the Lord of the nations will simply ‘deliver them from death and keep them alive in famine.’ They may survive the famine, but they are not necessarily spared the presence. A high theology need not entail a comfortable lifestyle for God’s people….

What is therefore striking about this psalm is not the ‘guarantees’ it offers but the God that it portrays. It aims the focus of faith in the right direction, not at the promises of God – as though we should hold God to a legal contract – but in the person of God himself. The greatest promise God offers is himself.

One of the great Old Testament passages dealing with God’s presence in the midst of suffering is Isaiah 43:1-5:

But now, this is what the LORD says – he who created you, O Jacob, he who formed you, O Israel: ‘Fear not, for I have redeemed you; I have summoned you by name; you are mine. When you pass through the waters, I will be with you; and when you pass through the rivers, they will not sweep over you. When you walk through the fire, you will not be burned; the flames will not set you ablaze. For I am the LORD, your God, the Holy One of Israel, your Savior; I give Egypt for your ransom, Cush and Seba in your stead. Since you are precious and honored in my sight, and because I love you, I will give men in exchange for you, and people in exchange for your life. Do not be afraid, for I am with you; I will bring your children from the east and gather you from the west.’

The scope of the promises and the depth of the commitment almost need no comment. Several observations can be mentioned however. The emphasis is on God’s presence, not on self-deliverance. The focus is on God’s sustaining hand through hardships, not on avoiding them.

As John Oswalt remarks, “It is not some quality given to the one who endures or some dramatic change of circumstances that makes victory possible: rather, it is the unfailing presence of God. . . . Whenever believers pass through hardship, loss, and tragedy, God accompanies them (cf. Rom. 8:31-39).”

And as Barry Webb comments,

There are some of the tenderest words here that God ever spoke to his children: you are mine; you are precious and honored in my sight; I love you; I will be with you. They are addressed to people far from home, still in the midst of deep waters, rivers, fire and flames (Isa 43:2). They have many more trials to face before they reach their final rest. There is no promise of a quick fix or a trouble-free future, but of God’s sustaining presence right through to the journey’s end, come what may.

And Gary Smith remarks, “As always, it is God’s presence that can remove fear. ‘I am with you’ means that they will never be alone, never be forgotten, and never be outside the reach of God’s strong arm. Since God will be with them, he will understand their hurts and fears.”

One other story, familiar to most of us, is about Daniel’s three friends and the fiery furnace (Dan. 3). Verses 24 and 25 speak about a mysterious fourth figure in the furnace, and the story has become a marvelous testimony to God’s presence in the trials of life. John Goldingay says this:

“God’s promise ‘I will be with you’ characteristically belongs to contexts of affliction and pressure (Exod 3:12; Isa 7:14; 43:1-3; Matt 28:20; see also Ps. 23:4-5). The experience of God’s being with his people not only follows on their commitment to him, rather than preceding it; it comes only in the furnace, not in being preserved from it.”

And as Joyce Baldwin reminds us, “There is no suggestion here or elsewhere in Scripture that the believer will be cushioned against trouble and suffering except by the presence of the Lord with him in it (Is. 43:2; Jn. 12:26).” Indeed, notice how Is. 43:2 which was written several centuries earlier has been literally fulfilled here.

This really is Immanuel, God with us. As Iain Duguid comments, this “is a physical demonstration of God’s presence with believers in their distress. God did not simply rescue his servants from the fire, he sent his personal emissary to pass through the fire with them, a presence that takes richer dimensions in the New Testament, when God comes to dwell physically with us as Immanuel.”

And it is this element that should be of help to those in similar situations. No cheap and easy promises of the avoidance of all evil, but the promise of his presence. Most commentators see this as the highlight of the passage, the real kernel of theological significance.

Ernest Lucas for example says that it is “this aspect of the story, the promise of the strengthening presence of God in times of trial, rather than any promise of miraculous deliverance from them, that has given hope to persecuted believers.”

In sum, avoidance of suffering and hardship is not the Christian solution – at least not all of it. Instead, finding the presence of God in such sufferings seems to be more the biblical understanding. As one anonymous author wisely remarked, “Suffering is not a question that demands an answer; it is not a problem that demands a solution; it is a mystery which demands a presence.”

Let me close with some words from the 2000 book by Philip Yancey, Reaching for the Invisible God. In his exploration of this topic, he puts it this way: “A relationship with God does not promise supernatural deliverance from hardship, but rather a supernatural use of it.” And his wide-spread travels have only confirmed this understanding:

“On my travels overseas I have noticed a striking difference in the wording of prayers. Christians in affluent countries tend to pray, ‘Lord, take this trial away from us!’ I have heard prisoners, persecuted Christians, and some who live in very poor countries pray instead, ‘Lord, give us the strength to bear this trial’.”

With the promise of God’s presence with us in our sufferings and trials, that may be the wiser way to pray.

Part Two of this article is found here: billmuehlenberg.com/2019/06/02/human-suffering-and-gods-presence-part-two/

7 Replies to “Human Suffering and God’s Presence – Part One”