In Part One of this article I looked at the issue of suffering as found in the Old Testament, and the wonderful truth that God promises to be with us in our suffering. He may not always deliver us from our hardships and trials, but he does say that he will not abandon us while we are in them.

This same truth can be found in the New Testament. In it this theme carries over in many ways. A number of passages can be appealed to here. Let me mention just a few. In the book of Acts for example we find a story somewhat similar to the Daniel story that we discussed earlier. 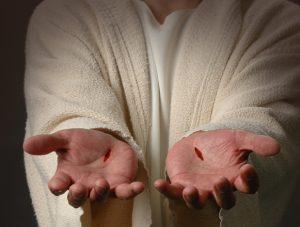 Because of his bold gospel proclamation, Stephen faces stiff opposition and is tried by the Jews (Acts 6-7). Notice how he was not delivered from his stoning, but the presence of God is especially highlighted in the conclusion to the account (7:55-56): “But Stephen, full of the Holy Spirit, looked up to heaven and saw the glory of God, and Jesus standing at the right hand of God. ‘Look,’ he said, ‘I see heaven open and the Son of Man standing at the right hand of God’.”

Just after this we hear about his stoning (vv. 57-60). Given that we read about how Jesus is now seated at the right hand of the Father (Hebrews 10:12), several suggestions have been made about why he is standing here. One is that he stood to receive Stephen.

The other is that Jesus stands to defend him as in a court of law. As James Montgomery Boice reminds us, there are really two different trials being mentioned here:

If this is the case, then what Stephen caught a glimpse of was that second and much greater trial in which he was involved. Up to this moment, he had only been able to see the earthly trial. He was condemned by the earthly court. But at the moment of his death he caught a glimpse of that greater, heavenly trial, in which he was acquitted. In this trial the Lord Jesus Christ took his side, pleaded his case, and prevailed. Perhaps he said something like this to the Father: “Stephen is my follower. He is confessing me. I am going to take him with me into heaven forever.” I find that immensely encouraging.

Here we have the first record of a Christian martyr. God did not deliver him from his fate, but he certainly was with him in it. We find similar things in the Christian Hall of Fame as found in Hebrews 11. I always like to compare and contrast two verses there.

We have various incidents of both outcomes occurring in the Old Testament. For example, Elijah escaped the wrath of Jezebel (1 Kings 19:10), but Uriah was killed by the sword (Jer. 26;23). As F. F. Bruce comments, “By faith one lived, and by faith the other died. So too in the apostolic age Herod Agrippa I ‘killed James the brother of John with the sword’ (Acts 12:2); but when he tried to do the same to Peter, Peter escaped his hands.”

So we have no guarantees that we will always be exempt from suffering, persecution and trials. But we do have the promise of God that he is present with us in these hardships. As George Guthrie reminds us, biblical faith may have a variety of outcomes: some positive and some negative:

Faith can also involve being tortured, mocked, beaten, destitute, stoned, put in prison, generally mistreated, and even mutilated. These do not fit easily into the “see all the wonderful things God wants to do in my life” gospel of modern, Western Christianity. Yet the picture is biblical. Our application of this passage must point out that faithful people sometimes do not see “results” in this life.

But God is always with us nonetheless, just as he promised. The presence of suffering and difficulty in our lives does not mean the absence of God’s presence. Quite the opposite: Scripture often links our sufferings with the fact that we really are with Christ, and he with us.

In this regard, one final passage is worth looking at. In Romans 8 we read much about suffering. Let me offer just part of it here (vv. 16-18): “The Spirit himself testifies with our spirit that we are God’s children. Now if we are children, then we are heirs—heirs of God and co-heirs with Christ, if indeed we share in his sufferings in order that we may also share in his glory. I consider that our present sufferings are not worth comparing with the glory that will be revealed in us.”

This takes things to a whole new level. It is one thing to say that God is with us in our sufferings. But here Paul says that in some mysterious way we actually share in the sufferings of Christ. And it is an indication that we are indeed his children. Plenty of ink has been spilled on this text. Let me offer just a few thoughts from several important commentators.

I quite like how James Montgomery Boice introduces this passage and the problem of suffering: “But why should Paul introduce the idea of suffering, of all things – and at this point? None of us would do it. If we were trying to assure Christians that they really are Christians and their salvation is secure, suffering is probably the last thing we would mention. We think of it in the ‘problem’ category.”

Yes modern, superficial Christianity sees an utter disconnect here. But not Paul nor the other New Testament writers. Suffering is a sure sign of God being with us. Martyn Lloyd-Jones is a sure guide here. At the end of his seventh volume (of 14) on Romans, he says this about Rom. 8:17:

There is this unity in Christ; we share the blessings, but we share the sufferings also. It is the picture of the Head and the body once more. That, then, is the argument. If you are suffering as a Christian, and because you are a Christian, it is one of the surest proofs you can ever have of the fact that you are a child of God, and if a child, then an heir, an heir of God, and a joint-heir with Christ. . . . The argument is inevitable; if we are suffering as Christians it is an absolute proof that we belong to Him, that we are therefore joint-heirs with Him. So we must look at our sufferings in that way.

And this is just one of a number of passages which say that we somehow suffer with Christ, that we share in his afflictions. There is a real unity here between Christ the sufferer and Christians who suffer. Joseph Fitzmyer, commenting on Romans 8:14-17, puts it this way:

Or as Michael Bird puts it,

Christians participate in Christ’s sufferings in two ways. First, in baptism they have entered into the story of the cross and made it their own story (see Rom 6:4-6). Second, suffering for the sake of Christ is the inevitable result of uniting oneself with the crucified Lord, where shame, scorn, abuse, and even persecution may follow (see Phil 1:29; 3:10; 2 Cor 1:5). Witherington sums things up eloquently: “One must follow the path Christ followed to glory, the path of self-sacrifice, or suffering with him and for him in the cause for which he suffered.” In sum, sonship sets Christians on the path to glory; yet such a path takes us under the shadow of the cross, into the waters of baptism, and through many trials of despair as we track toward our final destination.”

So knowing that God is with us in our sufferings is elevated in the New Testament. Our sufferings as believers become proof that we are indeed united with Christ and we share in the heavenly inheritance. Incredibly, we even share in the afflictions and sufferings of Christ.

Modern gospels pushing ‘your best life now’ and happiness and prosperity have little time for such truths, but we must nonetheless side with Scripture here. It is the path of suffering that the Son of God took, and that is to be our path as well.

Knowing these vital truths means we will not see suffering and hardship as indications of God’s absence or displeasure with us, but of his presence and his love for us. All the great saints have known these realities. Let me close with two important quotes from someone who has known great suffering, but who has also known the presence of the Lord so very deeply, Elisabeth Elliot:

“God will never disappoint us… If deep in our hearts we suspect that God does not love us and cannot manage our affairs as well as we can, we certainly will not submit to His discipline. …To the unbeliever the fact of suffering only convinces him that God is not to be trusted, does not love us. To the believer, the opposite is true.”

“I could not feel the truth of God’s love for me at that time. What it felt like was that God had dealt me a cruel blow, as with a whip. But underneath all those raging emotions the truth lay. A lifetime of knowing Him had laid a strong foundation that quietly supported me.… I knew with my mind and heart what went deeper than my pain—that Jesus showed us once and for all what He is like and what kind of love He has for us, by dying on the Cross. And that is fact. History. Nothing, no circumstance, no matter how hard or painful can change that. He has showed us His character once and for all. Our circumstances are not the window through which we understand His love, but rather we must view our circumstances through His love.”

Part Three of this article is found here: billmuehlenberg.com/2019/06/03/human-suffering-and-gods-presence-part-three/