In this series I have been looking at the biblical truths about God’s presence with his people as they suffer. Part One looked at the evidence of this from the Old Testament and Part Two looked at what the New Testament had to say about such matters.

Here I want to tie things together somewhat by noting two main ways in which Scripture refers to our Lord. One, he is of course known as Immanuel, God with us. As Matthew 1:22-23 says (quoting from Isaiah 7:14): “All this took place to fulfill what the Lord had said through the prophet: ‘The virgin will conceive and give birth to a son, and they will call him Immanuel’ (which means ‘God with us’).”

And two, he is known as the “suffering servant”. We read about this in Isaiah 52:13-53:12. So we find two key titles or descriptions of Christ here: he is one who is with us, and he is one who suffers. The implications should be clear: when we suffer as his people, he is especially near to us. 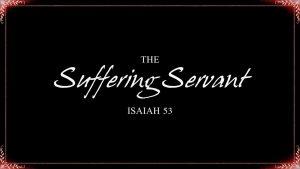 Other passages already make this point quite explicitly, such as Psalm 34:18: “The Lord is close to the brokenhearted, and saves those who are crushed in spirit.” Other such passages could be presented here. But let me look at this idea of a suffering servant in more detail.

Obviously it is at the cross that the sufferings of Christ are most fully manifest. More on that in a moment, but we must also note his entire life of suffering. As Q & A 37 of the 1563 Heidelberg Catechism says,

Q. What do you understand by the word “suffered”?
A. That during his whole life on earth, but especially at the end….

He was born to die, and his whole life was one of preparing for this end. Suffering was something he knew all about. The sufferings of Christ are not only found at the cross. The suffering servant of Isaiah 53 knew suffering throughout his life.

As John Nolland puts it in his commentary on Luke, “Jesus’ suffering is not restricted to events right at the end: he was rejected in his home town (4:16-30); he was dismissed as glutton and drunkard by many (7:34); he was one who has nowhere to lay his head (9:58).” The passion is simply the culmination of a divinely-appointed life of suffering.

And as John Drane notes, “From the time he was baptized, and perhaps before that, Jesus saw that the course of his life was to be one of suffering” In his 2013 book Walking with God Through Pain and Suffering Tim Keller summarises this life of suffering:

The gospels show us Jesus experiencing the ordinary pressures, difficulties, and pains of normal human life. He experienced weariness and thirst (John 4:6), distress, grief, and being “troubled in heart” (Mark 3:5; John 11:35; 12:27). His suffering was such that throughout his life he offered up prayers “with loud cries and tears” (Heb. 5:7; cf. Luke 22:44). He knew what it was like to be completely misunderstood by his best friends and rejected by his family and hometown (John 7:3-5; Matt. 13:57; Mark 3:31). He was also tempted and assaulted by the devil (Matt. 4:2ff). And amazingly, we are told that Jesus “learned” from what He suffered (Heb. 5:8). Don Carson concludes, “The God on whom we rely knows what suffering is all about, not merely in the way that God knows everything, but by experience.”

But obviously it is at Calvary that we see the full display of suffering taking place. All that which is presented in Isaiah 53 finds full expression in the gospel accounts of the suffering and death of Christ on the cross. Needless to say, the sufferings of Christ are ultimately indescribable. Who can fathom them?

We know he is intimately aware of what we are going through. Indeed, “he took up our pain and bore our suffering” (Is. 53:4). So there is nothing we experience by way of pain and suffering that he is not unacquainted with. As such he is nearer to us than anyone else can be.

In his immensely important 1986 book The Cross of Christ John Stott looks at various ways in which the sufferings of Christ relate to our sufferings. One of them is that “the cross of Christ is the proof of God’s solidary love, that is, of his personal, loving solidarity with us in our pain.”

Unlike various false views of God which claim that he is aloof from our sufferings, or that he even delights in watching us suffer, the cross demonstrates the exact opposite. As Stott says, it smashes to smithereens these terrible caricatures of God: “We are not to envisage him on a deck-chair, but on a cross. The God who allows us to suffer, once suffered himself in Christ, and continues to suffer with us and for us today.”

There is good biblical evidence that God not only suffered in Christ, but that God in Christ suffers with his people still. Is it not written of God, during the early days of Israel’s bitter bondage in Egypt, not just that he saw their plight and ‘heard their groaning’, but that ‘in all their distress he too was distressed’? Did Jesus not ask Saul of Tarsus why he was persecuting him, thus disclosing his solidarity with his church? It is wonderful that we may share in Christ’s sufferings; it is more wonderful still that he shares in ours. Truly his name is ‘Emmanuel’, ‘God with us’. But his ‘sympathy’ is not limited to his suffering with his covenant people. Did Jesus not say that in ministering to the hungry and thirsty, the stranger, the naked, the sick and the prisoner, we would be ministering to him, indicating that he identified himself with all needy and suffering people?

I could never myself believe in God, if it were not for the cross.

Exactly. That is the God that we are dealing with: not a divine absentee landlord, not an impersonal force, and not an indifferent sovereign. We have a God who knows all about suffering and is fully willing to enter into our suffering. This is not a God detached from the pain and suffering of the world, but one fully submersed in it all.

As Os Guinness reminds us in his 2005 volume, Unspeakable: Facing Up To Evil In an Age of Genocide and Terror:

God is all-good: no other god has wounds. At the very heart of the Bible is a God who cares and comes to the aid of those who look to him. In contrast to the Eastern religions, the biblical response to evil and suffering is one of engagement, not detachment. And in contrast to secularist beliefs, we are not on our own as we fight evil….

In a real world of pain, how could one worship a God who is immune to it? Unless God has wounds too, any mere sense of duty always flags in facing the worst evil, high-minded principles run out of breath, education and speculation become mere chatter, and sophisticated therapy is exposed as charlatan incompetence. Here is where the silence of the Bible over why God permits evil is outweighed by the Bible’s stentorian shout about what God is doing about it. In the crucifixion of Jesus, sheer and utter evil meets sheer and utter love; unadulterated love wins out over unadulterated evil. No one can ever go so low that God in Jesus has not gone lower. The horrendous evil that looks as if it is the final obliteration of goodness and humanness becomes God’s deepest identification with his creatures. There is hope for victims; there is even forgiveness for perpetrators. For those who know the cross, the pages of history are stained indelibly in blood with the evidence of the goodness of God.

God is good, and God is with us – even in our sorrow, our grief, and our sufferings. He is, after all, the Suffering Servant.

Part One of this article is found here: billmuehlenberg.com/2019/06/01/human-suffering-and-gods-presence-part-one/