Having already written 14 full or partial articles in the past 14 months about Christian Rugby star Israel Folau, I really did not think I would be writing any more. But as anti-Christian bigotry and Folau-bashing keeps ramping up, it looks like I need to do yet another piece.

Now the God-hating lefties are going berserk because Folau has set up a funding campaign to help cover his $3 million in legal fees. He needs the funds to challenge Rugby Australia and their discriminatory dismissal of him. It is ultimately about religious freedom – and the war against it.

But idiotic claims are being made that he is greedy, and that sick children are dying because people are giving to Folau instead of them! Good grief. Um, people can give to anyone they want to! And the issue here is not the wealth of Folau or his supporters. It is one of Christian solidarity. Those giving to him know that today it is Folau, and tomorrow it might well be them. 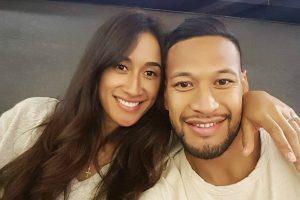 They see the ugly crackdown on Christianity in the public square, and more and more in non-public spheres. Recall that what Folau had said that got the misotheists so upset was said on his own sites on his own time. So many Christians know what this is really all about: a full-fledged war on Christianity, and on any believers who boldly will stand up for their faith.

But the lunar left and their media cronies have been going nuts over all this. There have been relentless attacks on Folau, and most of the lamestream media has been up to its ears in this. For example, the Sunday night Ch. 7 TV news was especially appalling as it “covered” this story. It was not in the slightest stretch of the imagination a news story – it was a hatchet job opinion piece, designed to do one thing only: vilify and demonise Folau.

The hatchet man, I mean reporter, filmed himself out of Folau’s home, carrying on about what a fancy house it was. He even waxed all biblical, citing the gospel passage about it being easier for a camel to pass through the eye of a needle than for a rich person to enter into heaven. He tried to make the case that Folau must be a lousy Christian.

The entire piece was nauseating. One has to ask: Has Ch. 7 decided it now will be a mouthpiece for anti-Christian bigotry? Does it only hire atheists to work for them now? Oh, and does anyone who works at Ch. 7 own a nice home? Hypocrisy much?

And this is not a one-off with Seven. Consider yet another ugly hatchet piece by the anti-God botherers at Ch. 7: 7news.com.au/sport/netball/folaus-wife-in-clear-for-campaign-backing-c-180137

If you are sick of this hatred of Folau and God and want to make a complaint to Ch. 7, please do. You can contact them here: support.7news.com.au/contact/

Martyn Iles of the ACL, who has a legal background, offers a few inconvenient truths here:

(1) There is no “greed”
The money is being deposited straight into a trust account. It cannot be used for anything other than defraying his legal expenses. Leftover funds will be distributed – likely to a philanthropic cause consistent with the intent of the original donors. If he was in this for money, he would have taken the millions of $ he was offered to simply delete the post.
Regarding his accumulated assets, he may have to live off those for a long time.

(2) Izzy did not manufacture this situation on purpose.
There was never a contractual or verbal agreement around social media use, despite claims in the media. The clause of the Code of Conduct invoked against him was the nebulous notion of “bringing the game into disrepute.” His social media content was consistent for some time. Christian, scriptural, themes of repentance etc. The post was business as usual (except the word “homosexual”).

(3) Highlighting the injustice of the case, and its importance to basic freedoms, is not playing the victim.
The legal significance of this case is very high. I’ve said elsewhere that this case is our case if we are Christians, or people who have politically incorrect beliefs. It is unjust, and it threatens to set a precedent which could bring about the same injustice upon many employees, professionals, and others in the Australian community.

He did no wrong, but he is being punished as a wrongdoer. That’s not “playing the victim” – it’s just explaining the situation as it is. It also addresses an issue at the heart of most religious freedom cases – ie, to what extent is religious expression protected?

Keep it simple – we are talking about freedom for the truth. And if we don’t care about that, then I query whether we understand that which lies at the core of the Christian mandate; to proclaim the truths of the gospel to all nations.

As Christians, we are supposed to stand with those of the household of faith who encounter various difficulties and trials. This has been very hard on Israel for a host of reasons, and the media continue to attack both him and his wife with false information.

Therefore, I am very happy to financially support him:
1. As a tangible demonstration of support for a fellow Christian;
2. In recognition of the importance of this case to all of us. His case is my case.

And as Martyn said in a television interview, “If he was into money, he would have taken the deal — he would have walked away from the negotiations a rich man by deleting the post or taking some other remedial action. But I think what Israel has been able to do is rally a movement around himself and around the cause.”
www.heraldsun.com.au/entertainment/television/do-you-believe-homosexuals-go-to-hell-australian-christian-lobby-boss-grilled-on-the-sunday-project/news-story/658fa138683b792a2715bf240425895a

Bernard Gaynor, who has also had to dish out heaps of money in legal battles (over $400,000 to be exact), offers us five reasons why we must support Folau. Here is one of them:

2. This is about far more than Israel Folau
This battle may look, on the surface, to be one between Israel Folau and Rugby Australia over an employment contract. And that is exactly what the activists want you to believe. They want to keep us isolated and divided. They want to hide the truth too and with hypocritical words.

On the one hand they say this has nothing to do with religion. And on the other they claim Rugby Australia’s contracts limit Christian religious expression through words such as ‘code of conduct’ and ‘respect’ and ‘diversity’ that are interpreted to mean whatever the corporate elite want them to mean. This is a fight that impacts every single one of us. Truth be told, it even threatens the freedom of the very people clamouring for Israel Folau’s head.

Any Australian who believes in freedom has a choice: to sit and watch or to jump into the trenches with Israel Folau. We may not have the talent to play beside him on the footy field, but each and every one of us has the means and ability – in our own way – to run with Izzy in a much more important match. If Israel loses this fight, we all lose. But if he wins, we all do as well. We need to make sure Israel Folau succeeds.
bernardgaynor.com.au/2019/06/21/why-i-donated-to-israel-folau/

While Folau is being hammered by many – including some clueless and compromised Christians – some rather unexpected defences are appearing. One very surprising defender, of sorts, is hyper-atheist Peter Singer. In a recent piece he said in part:

Folau is a born-again Christian, and his post was an expression of his religious beliefs. To prevent misunderstanding, I should say that I do not share those beliefs. As an unrepentant atheist, I am among those for whom, Folau believes, hell awaits. But that does not trouble me, because there is, in my view, no god, no afterlife, and no hell. Nor do I differentiate, ethically, between homosexual and heterosexual relationships.

Nevertheless, it cannot be denied that Folau’s post falls squarely within traditional Christian teachings that Christians accepted almost unanimously until the twentieth century, and that continue to be held widely – though against strong and growing opposition – among Christians today. The post clearly draws on Paul’s first letter to the Corinthians, in which Paul is reported as saying: “Or do you not know that wrongdoers will not inherit the kingdom of God? Do not be deceived: Neither the sexually immoral nor idolaters nor adulterers nor men who have sex with men, nor thieves nor the greedy nor drunkards nor slanderers nor swindlers will inherit the kingdom of God.”

Paul also tells his Christian readers that they must not associate with anyone who is sexually immoral: “Do not even eat with such people.” That would have included not only homosexuals and adulterers, but also sexually active singles.
www.project-syndicate.org/commentary/rugby-australia-israel-folau-firing-free-speech-by-peter-singer-2019-06

In this case Singer is a bit more cluey about basic Christianity than many Christians are. But let me finish with a word from Folau himself. He said this on the funding site:

Thank you to all those who have given to my Legal Action Fund so far. I am humbled and overwhelmed by the support I have received, for which I am very grateful. Unsurprisingly, I have been criticised by Rugby Australia and some sections of the media overnight.

I decided to take legal action when Rugby Australia terminated my employment contract and ended my playing career after I expressed my religious beliefs on social media. I have received thousands of messages from supporters who believe discrimination in the workplace is wrong and has no place in Australia or anywhere else.

Sadly, Rugby Australia have said that they will devote significant resources to fight me in court. This shows I have a long and hard battle on my hands, which is why I am asking for your support. The money that is donated will be used to fund my legal battle, which could take years. While the attacks against me have shown I have a big fight on my hands, I will stand strong.

Your support and my faith will give me strength. For those of you who have chosen to donate within your capacity, I am very grateful of your support for my legal case. For those not in the position to donate, I value your prayers and messages of support so much. Every little bit will help.

39 Replies to “The Haters and Bigots Are Still After Folau”