It is NOT racist or bigoted or hate-filled to offer this little thought experiment: if you were walking through a dark laneway at night in any major Western city, and you are approached by a gang of men, who would you rather they be: A group of men with Korans under their arms shouting ‘Allahu Akbar,’ or a group of men with Bibles under their arms singing “Jesus loves me this I know”?

Sure, most Muslims are more or less nominal in regard to their faith, so they do not take seriously various Koranic injunctions, such as: 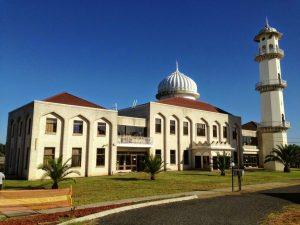 But when it comes to religious violence, it is simply a fact of life that a person is much more likely to be killed by devout Muslims than by devout Christians. That is because Christ and the New Testament NEVER command Christians to kill others in the name of Christ. In fact Jesus tells us to pray for our enemies. But Muhammad and the Koran DO command Muslims to kill the infidel. This is simply a brute fact that we have to deal with.

And it is the same with places of worship in the two religions. The Christian church is a place where Christians gather to love their Lord. This includes the preaching of Scripture, partaking in the Lord’s Supper, and singing as part of corporate worship.

This is not quite what we find in a mosque. It has a much different significance in Islam than a church does in Christianity. I will explain this further in a moment, but let me mention why I am now writing on this. It is because the city where I live has seen a number of approvals for mosques to be built, despite the concerns of many.

Three in the eastern suburbs have just been approved in the past week! One news item looks at two of them:

Controversial plans to build two mosques in Melbourne’s south-east have been given the green light, despite almost 800 objections to their construction. The two mosques are set to be built in the Casey area, one in Doveton and the other in Narre Warren North, after councillors voted 7–3 in favour of the mosques. The Islamic Council of Victoria has today said the objections to the projects are fuelled by Islamophobia.

Deputy mayor of Casey, Councillor Rosalie Crestani, says she is personally concerned about religious extremism. “I’m actually opposed to the safety issues that can come from Islamic extremism,” she told 3AW’s Neil Mitchell. “I’m aware that most Muslims are peaceful, but not all of them are. So that’s what I’m concerned about.” https://www.3aw.com.au/controversial-mosques-given-the-go-ahead-despite-almost-800-objections/

Well done Councillor for being one of the few to take a principled stance here. I wish we had many more leaders like you who are aware of what is going on. And in Blackburn we now find that a large three-story mosque will soon be going up. As one news report states:

A three-storey mosque is set to go up opposite Forest Hill Chase shopping centre in place of an old funeral parlour after years of controversy surrounding the site’s development. Whitehorse Council has finally approved a rebuild of the mosque at 245-247 Canterbury Rd, Blackburn, more than five years after the Islamic community first tried to redevelop the site, and almost 10 years after it began worshipping inside the former funeral home. Plans for the upgrade were given the green light last Monday, despite significant opposition from people living in the surrounding area.
https://www.heraldsun.com.au/leader/east/blackburn-mosque-to-be-rebuilt-across-from-forest-hill-chase/news-story/6c4ce0855f1682ee02c9f63dcfc5c5b3

Hmm, while Muslim mosques are opening up all over the West, just how many Christian churches are opening up in Muslim-majority countries? Leaving that important question aside, let me ask another: Just why should folks be concerned about all these new mosques springing up all around us?

As just mentioned, they are NOT similar to Christian churches – not even close. But I have written on these matters before, so let me simply quote from what I said previously about this. The remainder of this piece comes from this 2014 article: https://billmuehlenberg.com/2014/03/28/the-significance-of-the-mosque/

All is one in Islam, so spreading Islam means spreading an entire way of life, including the political, cultural and legal aspects. Thus Islamic immigration is also far different from that of other religions. One very important book on all this is Modern Day Trojan Horse: The Islamic Doctrine of Immigration.

Written by a former Muslim, Sam Solomon, and E Al Maqdisi (ANM Publishers, 2009), it is a very revealing look at how Muslims in the West are going about establishing a political power base to work toward the eventual takeover of the host nation.

The strategy, as detailed by the authors, is quite clear: set up a beachhead in a non-Muslim nation, consolidate your gains, push for a separate and distinct culture, and work for full rights in terms of separate law systems, finance systems, dietary systems, and so on.

The aim is not to fit in and embrace the values and beliefs of the host culture. The aim is to take over the nation, and foist Islamic values and beliefs on the kaffir (infidel) instead. It is about the establishment of a universal caliphate, and the spread of sharia law throughout the globe.

And the role of immigration is quite crucial here, going all the way back to Muhammad himself. Recall that the migration (Hijra) of Muhammad from Mecca to Medina in 622 is the most important event in the Muslim calendar. This initiated the spread of Islam by sword and conquest.

The Hijra “changed the status of Islam as a religion and of the Muslims as a community, transforming them from being a weak people to a powerful political entity … and ultimately into a powerful socio-religious political state.” Thus Islamic migration is still viewed as so very important today.

And a major player in all this is the mosque. As the authors write, “Mosques are at the heart of the community. The mosque is the most crucial infrastructure for the development of any Muslim community. Building mosques is a strategy to emulate and imitate Muhammad.”

They detail how this process works: “The Islamic community consolidation system works through a network of volunteers and other paid ‘pious’ individuals who act as community or mosque liaison officers, who keep a close eye on the community by policing the new immigrant arrivals….

“The major aim is first and foremost to consolidate the existing Muslim community, and only in so doing successfully would it be possible to declare and fight for Shariah and the gaining of a special status for the Muslim community. The first foundational principle for the creation of a successfully visible Islamic society is to be separate and distinct.”

While I recommend that all concerned citizens get a copy of this book, a brief article on the same theme can be offered here. Janet Levy has written a vital piece entitled “A Mosque Is Not Like a Church or a Synagogue”. Discussing the American situation, she writes, “A mosque is a symbol of this ultimate authority and serves the function of organizing every aspect of life in a Muslim community.

“Mosques are modeled after the first mosque established by Mohammed in Medina, which was a seat of government, a command center, a court, a school, and a military training center and depot for arms. Mosque leaders today issue religious decrees, enforce Islamic doctrine, monitor conduct, provide training, punish transgressions, and command actions, including the requirement to conduct jihad.”

Therefore a mosque “is totally unlike a church or a synagogue, entities that serve their communities under the law of the land and are both empowered and restrained under the First Amendment of the Constitution. Under the Establishment Clause of that amendment, the government is prohibited from establishing a state religion or conferring preferential treatment on one religion over another.”

But in “Muslim countries, no separation exists between mosque and state. Islamic doctrine or sharia controls all aspects of a person’s existence, from the correct way to use the toilet to permissible forms of lying, or taquiya. For Muslims, Mohammed is the perfect man, whose every example must be emulated, even though by Western Judeo-Christian standards he was a mass murderer, pedophile, rapist, torturer, and looter.

“Furthermore, Islamic doctrine is immutable, and any criticism of the traditions and practices of Mohammed is considered apostasy, which is punishable by death. No free individual will exists or is allowed when it comes to practices and observances. Sharia must be strictly followed.”

She concludes, “The radical nature of U.S. mosques was confirmed in 2005 by a study conducted by Freedom House, ‘Saudi Publications on Hate Ideology Invade American Mosques,’ in which it was determined that 80% of American mosques encouraged Muslims to work for the establishment of the Islamic state and espoused hatred and intolerance toward non-Muslims….

“According to former FBI agent and expert on Islam John Guandolo, we have over 2,000 so-called Islamic centers across the U.S. modeled after the first mosque in Medina. These Islamic centers can be likened to military command centers that imbue jihad ideology and serve as processing centers for jihadist training, Guandolo says.

“In view of the stated intent and the supporting ideology of mosque-proliferation, we would be well-advised to heed the words of former Muslim and professor of sharia law Sam Solomon, who declares, ‘We must never forget that Islam is an all-encompassing ideological system, and as such wherever there is a Muslim community there will be sharia, and wherever there is sharia, there is Islamization of the territory and ultimately the nation.’

“Rather than allowing the building of more mega-mosques in the United States, we should halt existing projects and seriously consider shutting down existing mosques to prevent the proliferation of an ideology that has publicly pledged to destroy America.”

The situation in America is not unlike that of the one here in Australia. The radically different nature of a mosque means that we must cast a very critical eye over it, and be very wary for calls to establish new mosques. Freedom, democracy and a proper separation of state and religion are all at risk here if we do not keep vigilant in this regard.
www.americanthinker.com/2012/08/a_mosque_is_not_like_a_church_or_a_synagogue.html

17 Replies to “Yes, Mosques Matter, and No, They Are Not Just Like a Church”