As you would know – or should know – the Conservative Party in Britain has a new leader, and the nation now has a new Prime Minister: Boris Johnson. He easily beat his nearest challenger Jeremy Hunt in a two-to-one vote, and has now replaced Teresa May for the top job.

If a Christian or a conservative were to ask me what I make of all this, I would give a very brief response as follows: he is a real mixed bag. He is hardly a conservative on some matters – he has no problems with homosexuality for example, and his own personal life has been all rather rocky, with various marriages, affairs and mistresses. But on some other areas of concern, such as Islam, or immigration, or Brexit, he could be much better than folks like May were. 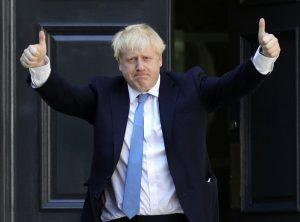 The 55-year-old is an interesting character to say the least. One might make some comparisons to Trump – to a limited degree, although that comparison might better lie with Nigel Farage. But Trump has said that Johnson is a “really good man” and has already referred to “Britain Trump”! He said this: “They’re saying ‘Britain Trump’, they call him Britain Trump and people are saying that’s a good thing.”

Trump went on to say “Congratulations to Boris Johnson on becoming the new Prime Minister of the United Kingdom. He will be great!” And Australian Prime Minister Scott Morrison said this: “He has a reputation for getting things done and making things happen. I wish him all the best as he charts the way forward for the UK. We have a great relationship with the UK and it will remain so with Boris.”

While some call him a buffoon and the like, he is no dummy. He studied at Eton and Oxford. I have his biography on Churchill and it is not a bad book, with many folks singing its praises. As to his religion, he left his mother’s Catholicism and became an Anglican. But at best this seems to be just a nominal faith.

He will certainly be more forthright on many issues than many of his milquetoast predecessors. Indeed, some cabinet ministers have already resigned, saying they prefer not to serve under Johnson. And consider this headline: “A leading Muslim Tory activist has compared Boris Johnson to Adolf Hitler and vowed to quit the party if he becomes leader.”

Hmm, we always have some pretty good indications about a guy when decidedly leftist leaders let it be known how little they like him. And there are many more. Nicola Sturgeon of Scotland has said she has “profound concerns” about him, and Jeremy Corbyn said Labor would table a no confidence motion to get rid of him.

All this is a brief look at the man, but much more needs to be said. How he performs in the days ahead remains to be seen. For the rest of this article, let me draw upon some others who know more than I do about the man and his virtues and vices. While many conservatives are glad he is now at 10 Downing Street, not everyone has been so keen.

Writing a month and a half ago in various journals, including the Australian Spectator, one English conservative writer, David Sergeant, warned about the man, calling him a “leftist fraud”. It was a pretty strong piece indeed. Johnson was also called “a nasty piece of work,” “a radical social liberal,” and “a master of deception,” for starters.

The truth is simple. Boris Johnson isn’t a conservative. He isn’t a man of the people or the champion of grassroots. He’s an internationalist, establishment elite who will say or do anything for personal advantage. Sure, for now that might mean members like what we hear, but let there be no doubt – once elected – Johnson would turn on us in an instant.
newenglishtimes.com/boris-johnson-is-a-leftist-fraud/

Others think – or hope – he is the right man for the job, and may be another Trump-like figure – or maybe even a Reagan-like figure. For example, Lloyd Evans, writing in the UK Spectator says Boris “will soon be the most popular leader in the world”. He certainly takes a much more positive view of the man himself. He writes:

It’s curious that most of the public believe they know Boris already. Many probably think of him as a brash, self-centred wag who dominates every conversation with a string of anecdotes and routines – like an albino Oscar Wilde. Not at all. He’s modest and even shy at the dinner-table. He restricts himself to his immediate neighbours and he never turns a social event into a solo performance. He’s a great listener. He draws people into his confidence by offering a personal revelation. ‘I’m a bit worried about my kids,’ he once said to me, when his brood were approaching their teens. ‘I’m not sure if they respect me.’

The EU won’t be able to read him. They won’t like that. And they’ll be rather miffed to discover that they can’t help warming to him either. Most of the people who loathe him have never met him. Everyone who enters his orbit finds themselves smitten by his curious, cat-like giggling presence. He likes people. And people like him back. In that respect he’s more of a Reagan than a Trump. He’ll work his magic on the heads of state and the chancellors he’s about to meet. By the autumn, we’ll have the most popular leader in the world.
blogs.spectator.co.uk/2019/07/boris-johnson-will-soon-be-the-most-popular-leader-in-the-world/

Plenty of questions remain. Is Johnson an actual conservative? Is he all rhetoric and no action? Will he have the courage to really follow through on some of the big-ticket items, not least of which, delivering on Brexit? As the American Thinker has asked in a new article, will “Boris Johnson, slay the EU and revive the Reagan-Thatcher comity?” Time will tell.

At the very least, these are interesting days, and it is hoped that Johnson does far better than some of his predecessors. We shall see. In the meantime, I fully have to agree with Stephen Green, National Director of Christian Voice in the UK when he said:

“It was always going to be Boris Johnson who would become Tory Party leader and PM, but he and the whole of Her Majesty’s Government need our prayers right now. Keep praying for his appointments to Cabinet to be God-fearing, knowing that God works miracles in answer to his people’s heartfelt prayers.”

17 Replies to “On Boris Johnson”