It is not just kids who can ask some really tough questions – even really hairy theological questions. Adults of course can also ask plenty of meaty questions about God, the Bible, and Christian beliefs. Assuming the ones asking these questions are not just troublesome trolls, there is nothing amiss in asking such hard and probing questions.

Christians should always be ready to deal with genuine questions about the faith, as Peter exhorts us (1 Peter 3:15). And that includes questions from believers as well as from non-Christians. Asking questions is not always an indication of doubt or a lack of faith. Remember that there are some 300 questions asked in the book of Job. 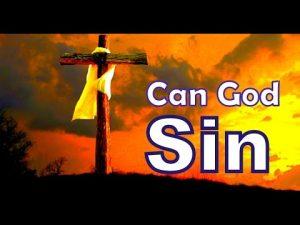 Providing honest answers to honest questions is always well worth being involved in, and I have sought to do this for many years now. Indeed, a good part of this website does just that: it deals with tough issues, and seeks to clearly reply to the many comments and questions that are sent in to me.

So let me get back to my title: this certainly sounds like a good question, and it would have been asked countless times over the centuries. I in fact recently had someone comment on this site and more or less make the case that God could sin, simply because of the fact that he has free will.

He said that if one has free will, one can rebel. And he further said that even though God chooses to do right, that “doesn’t mean he cannot choose to do otherwise”. Hmm, is he right? Can God choose to do wrong? In other words, can God sin?

My short answer is “no”. But this is how I briefly responded to his comment:

Thanks ****. As to God choosing to sin, that issue is much more clear from Scripture: no he could not sin or choose to sin. Whatever it means to say that God has free will, it does not mean he can choose to go against his own character and nature. That is impossible, even for God. Thus we have crystal clear passages about what God can NOT do, such as:

-Numbers 23:19 God is not a man, that he should lie, nor a son of man, that he should change his mind. Does he speak and then not act? Does he promise and not fulfill?
-1 Samuel 15:29 He who is the Glory of Israel does not lie or change his mind; for he is not a man, that he should change his mind.
-2 Timothy 2:13 if we are faithless, he will remain faithful, for he cannot disown himself.
-Hebrews 6:18 God did this so that, by two unchangeable things in which it is impossible for God to lie, we who have fled to take hold of the hope offered to us may be greatly encouraged.
-James 1:13 When tempted, no one should say, “God is tempting me.” For God cannot be tempted by evil, nor does he tempt anyone;

As these and other verses make perfectly clear, no, God can NOT sin – be it lie, or be tempted by evil, etc. God can never choose against his own nature and being. If he could, he would no longer be God. God is a perfect being, and that includes moral perfection. If he could choose to sin, he would cease being God. So orthodox Christian teaching would not accept that sort of claim.

There is of course more that can be said about this. Often confused thinking about this matter is the result of a faulty understanding of God’s omnipotence. Some folks will claim that God can sin because he is omnipotent – meaning he can do anything.

But that is NOT what divine omnipotence means. To say that God is all-powerful does not mean he is capable of doing anything and everything. He cannot contradict the laws of logic for example. His very nature as a truthful being means he cannot do that which is logically impossible.

Even God cannot make 2+2=5. Even God cannot make a round triangle. Pretending that he can do what is not doable – in this case, doing the logically impossible – is not how we defend God and his omnipotence. As C. S. Lewis famously put it in The Problem of Pain:

His Omnipotence means power to do all that is intrinsically possible, not to do the intrinsically impossible. You may attribute miracles to Him, but not nonsense. There is no limit to His power. If you choose to say, “God can give a creature free will and at the same time withhold free will from it,” you have not succeeded in saying anything about God: meaningless combinations of words do not suddenly acquire meaning simply because we prefix to them the two other words, “God can.” It remains true that all things are possible with God: the intrinsic impossibilities are not things but nonentities. It is no more possible for God than for the weakest of His creatures to carry out both of two mutually exclusive alternatives; not because His power meets an obstacle, but because nonsense remains nonsense even when we talk it about God.

I have written about these matters a number of times now. In one such article I listed a number of biblical passages similar to the list I just offered above. I then went on to say:

As can be seen, these mainly have to do with his character. So are these real limitations? Do they mean God is not omnipotent? Not really – it just depends on how we define the terms. If we mean that God can do all things that are doable (that is, are not logically contradictory, etc.), then we can say yes, he is all powerful.

In another article I ran with a quote from John Feinberg who said this about omnipotence:

We would do well to recognize that this attribute does not obligate God to do anything he can do. For example, God has power to make me a millionaire, and though I might wish for him to do so, his ability to do this in no way obligates him to do it. God’s moral attributes, including his wisdom, ensure that whatever he chooses in relation to this matter will be good, just, and loving, but those moral attributes do not obligate him to do this good and loving thing for me. Nor do they obligate him to do for me every loving, etc., thing he could do. Whatever God does expresses his omnipotence and his moral attributes, but omnipotence does not oblige him to do everything he can do.
billmuehlenberg.com/2017/01/15/can-god-anything/

And in a third piece on these matters I quoted from evangelical theologian Wayne Grudem:

This means that it is not entirely accurate to say that God can do anything. Even the Scripture passages quoted above that use phrases similar to this must be understood in their contexts to mean that God can do anything he wills to do or anything that is consistent with his character. Although God’s power is infinite, his use of that power is qualified by his other attributes (just as all God’s attributes qualify all his actions).”
billmuehlenberg.com/2017/01/16/can-god-anything-reflections/

Much more can be said on this, but let me bring up one more thing. While it may seem to uphold the virtue of God by claiming he merely always CHOOSES to do the right thing (and thus could potentially choose to do the wrong thing), that is not how Scripture seems to portray God.

Indeed, that is not a good enough or a big enough God for me. If God simply makes the right choices, there is always the possibility that at some point he could make a wrong choice. If that happens, we are all toast. We need something much more solid and reliable than that.

And that is what we have with the very being and character of God. He simply cannot choose evil. That is not in the realm of possibility for God. To be able to do so would mean he in fact is not God, for God, by definition, is a perfect being.

And the fact that he is immutable – not able to change – means he can never change the way he intrinsically is. He is a morally perfect being and he cannot veer away from that – not for a moment and not for the tiniest degree. A changing God is not God.

And God can never contradict himself or do anything inconsistent with Himself. Just as he cannot deny himself – in terms of his very existence – so he cannot deny who he actually is: a perfect being unable to change into any state of imperfection.

While all this can be mind-bending stuff – and too much for some believers who just prefer a “simple gospel” – these are important matters and well worth reflecting on. Sure, our thoughts in these deep things of God will always be imperfect and somewhat tentative.

But Scripture gives us a lot of material on this that we can run with. And my reading of the biblical data leads me to believe that no, God cannot sin.