I recently posted this passage on the social media, and one friend asked whether the question of Jesus was rhetorical or prophetic. I replied that it might be a bit of each, and added that I might pen a piece on the passage. Well, here it is. The verse in question is this: “When the Son of Man comes, will he find faith on the earth?”

As always, context is king. The immediate context of course is the parable about the persistent widow and the unjust judge (Luke 18:1-8). And the larger context is what immediately proceeds this parable: Luke 17:20-37, which discusses the coming of the Kingdom of God. 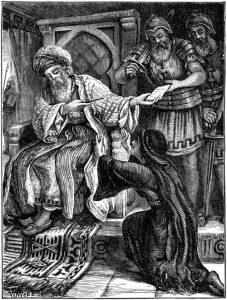 Just as the Jews had long asked about where the conquering king is that they were looking for who would free them from gentile oppression, already the new disciples of Jesus are wondering about the final consummation of the kingdom and God’s righteous vindication.

Is he indeed going to return? If so, when? Will God’s eventual vindication and triumph take place? Other places in the New Testament we have such concerns, including concerns about the supposed delay of his return. For example, Peter says this in 2 Peter 3:3-10:

Above all, you must understand that in the last days scoffers will come, scoffing and following their own evil desires. They will say, “Where is this ‘coming’ he promised? Ever since our ancestors died, everything goes on as it has since the beginning of creation.” But they deliberately forget that long ago by God’s word the heavens came into being and the earth was formed out of water and by water. By these waters also the world of that time was deluged and destroyed. By the same word the present heavens and earth are reserved for fire, being kept for the day of judgment and destruction of the ungodly. But do not forget this one thing, dear friends: With the Lord a day is like a thousand years, and a thousand years are like a day. The Lord is not slow in keeping his promise, as some understand slowness. Instead he is patient with you, not wanting anyone to perish, but everyone to come to repentance. But the day of the Lord will come like a thief. The heavens will disappear with a roar; the elements will be destroyed by fire, and the earth and everything done in it will be laid bare.

Let me offer a few of the verses just preceding verse 8 (vv. 6-8): “And the Lord said, ‘Listen to what the unjust judge says. And will not God bring about justice for his chosen ones, who cry out to him day and night? Will he keep putting them off? I tell you, he will see that they get justice, and quickly. However, when the Son of Man comes, will he find faith on the earth?’”

As to the question offered by Jesus, it may well be at least in part rhetorical. Indeed, just moments ago in my daily reading I came across a proverb that also may have a rhetorical ring to it, Proverbs 20:6: “Many a man proclaims his own steadfast love, but a faithful man who can find?”

I am not sure if the question of Jesus is a prophetic sort of announcement however, as if he is saying there will be none. Rather, it seems to function as a word of encouragement and exhortation. He is urging his followers to remain faithful, to watch, to persist, and to stay vigilant. He wants them to be alert and watchful, and to remain faithful until he does return.

Persistence in prayer is a big part of this. And once again we have the mysterious interplay between human responsibility and God’s sovereignty. The Lord’s return is God’s doing, and yet we seem to have some role to play here.

As Peter also says, in the two verses immediately following the ones I quoted above: “Since everything will be destroyed in this way, what kind of people ought you to be? You ought to live holy and godly lives as you look forward to the day of God and speed its coming.”

In some strange way it seems that we can help to “speed its coming” or “hasten its coming” as other translations have it. So we have a role to play here as well. Indeed, if you look at Matthew 24:14 we find another indication of this: “And this gospel of the kingdom will be preached in the whole world as a testimony to all nations, and then the end will come.”

It seems that unless we do our job of global evangelisation, we may in some way hinder the coming of our Lord. Regardless of how we are to understand this verse, and the one in Peter, the point is to pray, to persevere, and to be vigilant. That is the exhortation Jesus is offering in his question, and in the parable as a whole.

I quite like what Philip Graham Ryken says in his expository commentary on Luke, so let me conclude with his wise words:

Most people think that God is the one who has questions to answer – questions like “Is Jesus really coming again?” and “Why is everything going wrong in the world?” and “Will justice ever be done?” Yet those are not the real questions. Of course Jesus is coming again, and of course justice will be done; God has promised this in his Word (e.g., Matt. 24:44-46). The real question is the one God has for us – not whether Jesus will come again, but whether we will be ready for his coming. Or to put it another way, the real question is not whether God will do what he has promised to do, but whether we will trust him to do it. When the Son of man comes the way he promised in Luke 17, will he find people praying the way he commanded in Luke 18?

We must answer this question at the personal level. In one sense the answer to the question Jesus asks in verse 8 is perfectly obvious: Jesus will indeed find faith on the earth, because he has promised that his church will endure. But will he find you in the faith? That is the question. Remember Lot’s wife: when judgment came, she looked back at all the things she loved and she was lost forever. So what will happen to you when Jesus comes again? Will he find you in the faith?

One of the ways that we prove that we really do trust in God is by never losing heart, but always praying for the kingdom to come. It takes faith to persevere in prayer – faith in God and all the promises he has made to us in Christ. Augustine said, “When faith fails, prayer dies. In order to pray, then, we must have faith.” We must have faith in the saving work of Jesus Christ, and also faith in the love, justice, and wisdom of God – all the attributes the parable shows us by contrast. It is because we believe that God cares about us and will do what is right in the end that we continue to pray. If we give up on prayer, we are really saying that we think God is more unrighteous than the unjust judge. As unrighteous as he was, at least that judge was willing to listen to the widow’s repeated requests. But if we stop praying, we are practically saying that we do not believe God will listen to us at all.