A shocking reality is that many folks who think they are Christians may not be at all, and they are actually serving someone other than God. Far too many Christians can be supporting Satan and his agenda. They may claim to be Christians, but when they effectively oppose God by running with so much of what the world is promoting, they can in fact be serving Satan.

Hard words I know – but we must hear them. So what do I mean by all this? My thesis here is simple: we know what Satan stands for, and when we willingly or otherwise hop aboard his work in this world, we are supporting him, and not God. 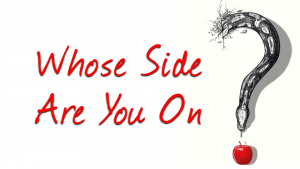 Satan is of course fully opposed to God and everything about him. But because he cannot get to God, he goes after the next best thing: God’s people. So he is working overtime to oppose, trip-up, sideline, neutralise and attack all believers. That is his full-time job.

And one of the briefest but most helpful descriptive pictures of Satan and what he seeks to do comes from the words of Jesus in John 10. In verses 10-21 we have his discussion about the Good Shepherd and his sheep. Jesus is the Good Shepherd, but Satan is the opponent who seeks to get to the sheep.

In John 10:10 we have his famous description about what Satan seeks to do: “The thief comes only to steal and kill and destroy; I have come that they may have life, and have it to the full.” While Satan of course does more than just these three things, he certainly specialises in them.

Let me look at each of these three activities of Satan, and offer three cases or examples of each. The point I am trying to make here is this: if Christians are supporting these things, they may in fact be supporting Satan. We each need to ask ourselves: Just whose side am I really on?

Stealing and theft takes many forms of course. Obvious examples would be to rob a bank, to pinch things from your place of work, or to cheat on your taxes. But here I want to look at three broader, more generic – but just as diabolical – cases of theft.

-Stealing a child’s innocence. This happens in so many ways today. Invasive and comprehensive sex-education classes from kindergarten on up is one clear case of this. So too is the current push for all things trans. We are stealing from a child even physically, as we apply the surgeon’s knife or use dangerous body-altering drugs.

-Stealing a child’s birthright and heritage by denying their own biological mother and father. One of the main evils of so-called homosexual marriage is that it deprives children of the two most vital and important persons in their life: a biological mum and dad. That is theft of a most fundamental and damaging sort.

-Stealing the fruit of productive workers by excessive confiscation and redistribution of wealth by socialist governments. The hard-working producers can have their earnings stolen away from them by the State. That is because governments produce no wealth of their own. So the State takes the wealth of others, and decides who will get it.

Of course most of it goes to the statists themselves, not to the poor. Look at Venezuela as a current case in point, or recent appalling cases, such as the former Soviet Union and Eastern bloc. Such theft violates at least two commandments which presuppose the right to private property: the eighth, about theft, and the tenth, about coveting.

A guy coming up to an innocent man and stabbing him to death is an obvious killer – or more accurately, murderer. There is in fact morally licit killing, such as self-defence or just wars. But there are many other ways in which we can kill people. Some involve actually taking their life, while others do not.

-Killing the unborn is one of the main ways we get away with legal murder today. Around 45 million unborn babies are killed in their mothers’ wombs every year around the world. This is one of the greatest slaughters we have ever witnessed, yet in so many nations it is perfectly legal, and even celebrated.

-Killing the elderly, and those in between, is another way we can take innocent human life. Euthanasia goes against everything humanity and medicine stand for. Supporting the weak and the vulnerable is the real mark of a compassionate and civilised society. We should help the sufferer, not kill the sufferer.

-Killing the conscience and the soul by things like pornography and a never-ending entertainment culture is also a form of killing. In many ways we have created a generation of zombies who exist simply to be amused, entertained and strung out on a technological high. Many are left with a hole in the soul – a type of spiritual death.

-Destroying our morals. Morality is under attack all over the West, and those who support things like faithfulness in marriage and the sanctity of human sexuality are constantly under assault by the moral barbarians of our day. Marxists and cultural Marxists have long seen the need to destroy traditional morality.

-Destroying our heritage by rewriting history or depriving us of even knowing our own history is another example of this. The Marxists and the left have long excelled at this. People are much more easily controlled and manipulated by the totalist State if they are stripped of the knowledge of their own history.

-Destroying a culture. The two points mentioned above are components of the larger attempt to destroy our very culture and way of life. The left uses a host of means to bring this about: political correctness, victim mentality, the grievance industry, identity politics as well as more coercive and radical means.

While no culture is perfect, some are clearly better than others. The truth is, an all-out war has been declared on our Judeo-Christian Western culture and its many tremendous social goods. That should concern every single one of us. Destroying the West will not result in something better, but in something much worse.

These nine examples are just a few of many that could be offered here. Everywhere we see the enemy of God at work, seeking to hinder the purposes and plans of God, and undermine and destroy the Christian church. Behind all this is a spiritual war that we must all be aware of and involved in.

There are so many means by which Satan does his work of evil, and what he does best – steal, kill and destroy – we see occurring all around us. These are Satan’s way of doing things, not God’s. Those claiming to be the people of God should not be running with any of these things.

Yes there are various theological tests to determine who are truly following Christ, but some of these moral tests also give us real good indications. A person who claims to be a Christian but fully supports abortion or the homosexual assault on marriage and family tells us so much of what we need to know about whose side they are really on.

If they do these things, they demonstrate who they are really serving. And it is not God.