When is the last time you heard a sermon or read a book on the fear of God?

Here is a little experiment you can conduct. Go to any Christian bookstore and try to find all the books you can on “the fear of God”. Let me help you out here: if you find one or two you will be doing really well. Sure, you will find a million books about overcoming fear and the like, but that is an altogether different topic.

I just did a quick search of online bookstores and found very few titles containing this phrase. Those that seemed to fit the bill were few and far between. I could only put together a very short bibliography: 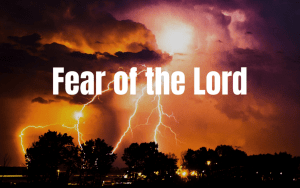 Beeke, Joel and Paul Smalley, John Bunyan and the Grace of Fearing God. P&R, 2016.
Bunyan, John, Treatise on the Fear of God. 1679.
Bridges, Jerry, The Joy of Fearing God. Waterbrook Press, 1997, 2004.
Martin, Albert, The Forgotten Fear: Where Have All the God Fearers Gone? Reformation Heritage Books, 2015.
Montgomery, Mattie, Scary God: Introducing the Fear of the Lord to the Postmodern Church. Thomas Nelson, 2018.
Petrie, Alistair, In Holy Fear: Rediscovering the Fear of the Lord. CityHarvest, 2015.

Yes there would be some other titles that might fit in here. But there is not a lot on this topic. Worse yet, I must confess that I only own the first book on that list! I hope to immediately rectify that, and get those other five volumes real soon!

But here is the scoop: The sad truth is, almost no one is talking about the fear of God anymore. Few pastors preach on it, few authors write on it, and few Christians meditate on it. It is becoming a lost truth of Christianity. Yet the Bible is saturated with the idea from Genesis to Revelation.

All up 889 times! The first, 334 times; the second, 493 times; the third, 47 times; and the fourth, 15 times. That is nearly a thousand references to the fear of God. And other terms and phrases could also be included here. If the Bible speaks to this topic that often, then we all better start paying some close attention to it.

It seems that over the years I have penned at least four articles entirely devoted to this topic:

And I would have referred to this theme many other times as well. So why am I bringing it up here again? As is often the case, a number of things have all happened at around the same time which makes me think that this is not merely a coincidence, but a God-thing.

First and foremost, I am continually aware of my own deficiencies in this area: my own lack of the fear of God, of holiness, of taking God seriously, of keeping close accounts with God. I am all too aware of how far I have to go in these areas, and it bothers me that I am not so much further ahead, having been a Christian for so long. Yes I am far better than I once was, but I have such a long way to go.

Second, in my daily reading I again came upon a classic text in this regard. In Isaiah 6:1-5 we find these memorable and sobering words:

“Holy, holy, holy is the Lord Almighty;
the whole earth is full of his glory.”

Third, a friend just posted a 25-minute video on the social media about the fear of God. I just watched it now. It is a compilation of great preachers and men of God speaking on this theme. Thus we find powerful and Holy Ghost empowered snippets from David Wilkerson, Leonard Ravenhill, Paul Washer, John Piper, Art Katz and Carter Conlon (plus a few others I did not recognise.)

This is the sort of video we all need to watch regularly and prayerfully. Indeed, you would be far better placed to stop reading this article now and go straight to the video instead: www.youtube.com/watch?v=su6VYvQN1Zk&feature=share

It is a life-changer. If it does not stir your soul and bring some much-needed conviction, I do not know what will. So do yourself a favour and watch it – as many times as is necessary. We just do not hear this sort of preaching any more. Yes a few pastors and teachers run with it, but they are clearly in the minority.

Let me offer a few closing thoughts on all this. From my perspective, most Christians in the West have lost this sense of the fear of God. Most are too careless about their obedience, their holiness, and their walk with God. They lack biblical balance. So they very much need to be reminded of these great biblical truths.

However we are all different of course. There are some Christians who are in a much different place. They might be overly legalistic. Or they might have no sense of assurance. They might question daily if they are even Christians. They might see God only as a dreadful judge and stern taskmaster. They might cringe whenever they think of God.

That too is an unbalanced picture of God and a lopsided Christian life. Such people need to hear about the wonderful grace, mercy, patience and love of God. They need to know about a loving heavenly father who cares for them deeply and tenderly. They need to see again the picture of the Father as told in the parable of the Prodigal Son.

So there is no one-size-fits-all Christianity here. Because we are all different, we all need different spiritual medicines at different times in our lives. But what I said above I believe is still more or less true: most Christians do indeed need to hear more about the fear of God.

We have far too many Christians in the West today who have a disrespectful and glib relationship with God. God is their pal, their buddy, their chum – or perhaps their butler. They have little or no deep reverence, respect and fear of God. They have a much too cavalier and fleshly sense of who God is.

So as always, we need to get the biblical balance right here. We need to proclaim the whole counsel of God. In a day of easy Christianity, cheap grace, and a watered-down gospel, we need to reclaim the fundamental truth of the fear of the Lord.

11 Replies to “Concerning the Fear of God”