Some thoughts on the religious freedom debate.

As most of you would know by now, a draft bill on religious freedom has been released by the federal government. Last week Attorney-General Christian Porter released the draft bill, and already plenty of discussion and debate has ensued.

The public is able to comment on this bill up until October 2nd. You can see the 52-page draft legislation here: www.ag.gov.au/Consultations/Documents/religious-freedom-bills/exposure-draft-religious-discrimination-bill.pdf 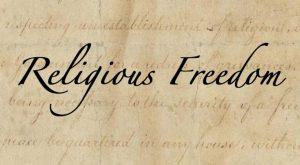 One prominent Christian who has a legal background is Martyn Iles of the ACL. He gives us a 15-minute overview of his concerns about the bill here: www.youtube.com/watch?reload=9&v=Dr9yoivyNjw

In future articles I hope to offer some thoughts on particular aspects of the bill. In the meantime, a few things can be said about it in much more general terms. As to the bill itself, there are two key points raised by Perth-based Christian commentator and law professor Augusto Zimmermann that I strongly agree with: don’t make use of the Australian Human Rights Commission in this; and the way forward is to dump 18C.

As to the former, he says establishing the position of a religious freedom commissioner within the AHRC would be a bad move: “Handing over matters of religion to the Human Rights Commission is a terrible idea. Wanting to be seen to do something, the Morrison government is just about to hand over a vast array of powers to a controversial body of unelected lawyers that have an appalling record of disregard for freedom of speech.”

As to the latter, a lot of our problems in this area are due to Section 18C of the Racial Discrimination Act 1975. Getting rid of it would be preferable to bringing in a religious discrimination law. Says Zimmermann:

Although it is broadly accepted that religious freedom is increasingly vulnerable in Australia, I nonetheless have serious doubts about the introduction of a religious discrimination law that further impinges on free speech being the solution.

A much better way to proceed would be to look at repealing the existing provisions in anti-discrimination laws that seriously impinge on free speech and freedom of association, in a way that strengthens the protection of religious freedom and, in fact, attempts to ensure that the widest scope of personal freedom is maintained when balancing conflicting human rights.

See here for more of his thoughts on these sorts of issues: www.spectator.com.au/2019/07/we-need-a-restoration-of-freedoms-bill-not-religious-freedom-legislation/

Another general point worth raising has to do with concerns that a religious discrimination bill and the like would allow all religions a free run, including immunity from criticism. While religions will not get a free pass by any means under such legislation, there are legitimate fears that some religions will use it as a club to beat other religions.

That is, not all religions are equal, and we know that many Muslim organisations are calling for blanket bans on all criticism of Islam. And with many aspects of Islam incompatible with pluralistic democratic life, great care is needed here.

The truth is, some religions clearly seem to deserve critical assessment more than others. So that is all part of how we proceed with such legislation. Consider a recent discussion I had with someone about the Israel Folau case. A fellow raised this concern:

‘So if he ‘wins’ the right for people to be able to put their religious views onto others in the workplace, no matter how offensive to others, with a free religious pass, this will also mean, Christian’s could be subjected to this from Muslims. I can see a lot of tears and fights in workplaces with all of this.’

I replied: ‘There are always limits of course and we already have laws on the books against incitement to violence, etc. Christianity does NOT urge its followers to kill the infidels, but Islam does. So we have some big differences here.’ To which he responded:

‘But we talking about religious freedom, not just for Christians. Islam, Church of Scientology etc etc….who determines the many ‘limits’ of what people can say. It’s their religious belief, so Folau is arguing anyone with such a belief should be able to share their views in the workplace. They also believe in stoning gay people to death, their ‘beliefs’. They could say it, just not carry it out. I could see a lot of trouble in modern workplaces today, which is why I believe there needs to be one rule for all.’

I answered: ‘Sure, and any future religious freedom legislation will have to be carefully drafted and considered. As I said, there are limits – there are no absolute freedoms here. Various social goods will have to be weighed against each other. Many of the core features of Islam violate some of our basic constitutional principles. So all this will need to be taken into account with any such laws being considered.’

And this sort of discussion is not new. Let me finish this piece by discussing a new book which has just appeared, dealing with the same sorts of issues. I refer to Liberty in the Things of God by Robert Louis Wilken (Yale University Press, 2019).

In it the American historian makes the case for “The Christian Origins of Religious Freedom” as the subtitle states. He reminds us that the standard thinking on this is that Christianity and other religions are intolerant and opposed to freedom of belief and conscience, and that it took the secular Enlightenment project to pave the way for real freedoms.

This is quite wrong he argues. In over 200 pages with a great amount of detail he explains why. He first reminds us what is the essence of religious freedom: “Religious freedom rests on a simple truth: religious faith is an inward disposition of the mind and heart and for that reason cannot be coerced by external force.”

He distinguishes this from toleration, which is “forbearance of that which is not approved, a political policy of restraint toward those whose beliefs and practices are objectionable. I wish to show how Christian thinkers came to consider religious freedom, or liberty of conscience, a natural right that belongs to all human beings, not an accommodation granted by ruling authorities.”

He continues: “To understand how religious freedom came to be cherished as a fundamental human right, the story must begin long before the Enlightenment and the development of modern political ideas and institutions. Its origins are not political but religious, and its history is a tale of inwardness, of spiritual freedom, and of obeisance aimed upward.”

While the great bulk of this book focuses on Christian thinkers of the sixteenth and seventeenth centuries, he does take us back to the early days of the Christian church. The early church father Tertullian for example was the first person to use the phrase “religious freedom”.

Says Wilken, “in highlighting the freedom and dignity of human beings he broke new ground. The unique constellation of ideas in his apologetic works is without precedent in the ancient world, and it would have a long afterlife in Western civilization.”

Moving ahead to the time of the Reformation, he discusses many Christians who gave careful thought to these concepts, including the importance of a separation of the temporal from the spiritual. For example, Luther spoke of “two kingdoms” and Calvin spoke of man being under two-fold government. Wilken writes:

“In different forms the distinction between the purposes of civil society and the ends of religion provided the intellectual framework that eventually made freedom of religion acceptable. Within society there must be a sphere in which men can exercise their conscience without the intrusion of government.”

While much of the discussion back then centred on freedom for various types of Christianity, some leaders thought outside of the box. Getting back to the conversation I mentioned above, some of these thinkers also discussed non-Christian religions as well.

For example, the English Baptist separatist and barrister Thomas Helwys (1550-1616) believed that “liberty of conscience had a bearing on Jews and Muslims as well”. Back then such thoughts were of course rather novel. And the famous Puritan minister Roger Williams (1603-1683) said that “liberty of conscience applies equally to Jews, Muslims, and Catholics – indeed, to all men, not only to dissenting Christians.”

This however is not a proper book review of this very important volume (hopefully one will be forthcoming). I simply highlight it here to show that serious thinking about religious freedom and the like has been around since the earliest days of the church.

So what Australia is now going through in terms of proposed legislation on these vexatious matters is simply part of a long line of thought and reflection on such matters. It is hoped that those framing this new legislation – and those commenting on it – will draw upon some of the wisdom and learning that has gone before.

7 Replies to “On Religious Freedom Legislation”