What does it mean when we are told that Christ became a curse for us?

This first half of this verse says this: “Christ redeemed us from the curse of the law by becoming a curse for us.” It is part of Paul’s larger discussion of the work of Christ, and the need for the Galatians to fully rely on his finished work by faith, and not rely on the works of the law. The wider context of this verse is Galatians 3:10-14:

For all who rely on the works of the law are under a curse, as it is written: “Cursed is everyone who does not continue to do everything written in the Book of the Law.” Clearly no one who relies on the law is justified before God, because “the righteous will live by faith.” The law is not based on faith; on the contrary, it says, “The person who does these things will live by them.” Christ redeemed us from the curse of the law by becoming a curse for us, for it is written: “Cursed is everyone who is hung on a pole.” He redeemed us in order that the blessing given to Abraham might come to the Gentiles through Christ Jesus, so that by faith we might receive the promise of the Spirit. 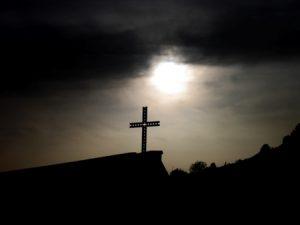 To understand the point Paul is seeking to make here, one must go to two passages from Deuteronomy which Paul brings together here in his argument. The two texts are these:

Deuteronomy 21:22-23 If a man has committed a sin deserving of death, and he is put to death, and you hang him on a tree, his body shall not remain overnight on the tree, but you shall surely bury him that day, so that you do not defile the land which the Lord your God is giving you as an inheritance; for he who is hanged is accursed of God.

Deuteronomy 27:26 Cursed is the one who does not confirm all the words of this law by observing them.

What is the solution? Paul says that Christ became a curse for us, hanging on the cross (or a pole, as the NIV puts it, or a tree, as other translations have). Paul is not alone in using the word “tree” when discussing the sacrificial death of Christ. Peter mentions it in several places:

Acts 5:30 The God of our fathers raised up Jesus whom you murdered by hanging on a tree.

1 Peter 2:24 who Himself bore our sins in His own body on the tree, that we, having died to sins, might live for righteousness—by whose stripes you were healed.

All this is primarily about substitution or exchange. As a popular expression of this goes, ‘He was cursed so that we might be blessed!’ This great truth of his substitutionary work on our behalf is found clearly stated in other places, such as:

2 Corinthians 5:21 God made him who had no sin to be sin for us, so that in him we might become the righteousness of God.

2 Corinthians 8:9 For you know the grace of our Lord Jesus Christ, that though he was rich, yet for your sake he became poor, so that you through his poverty might become rich.

1 Peter 3:18 For Christ also suffered once for sins, the righteous for the unrighteous, to bring you to God.

These and other passages speak to the wonderful exchange that takes place when sinners come to Christ with empty hands and look to him alone for salvation. In theological terms, the sinner’s sins are imputed to Christ and the righteousness of Christ is imputed to sinners. This is an amazing deal by any standard.

A few quotes from commentators on this glorious theme are worth featuring here. Douglas Moo comments, “Christ suffered exclusion from the people of God and, more terribly, separation from God the Father himself (Mark 15:34), so that those people who had been excluded because of their sin could be brought back in again.”

And John Stott puts it this way:

Jesus Christ has done for us on the cross what we could not do for ourselves. The only way to escape the curse is not by our work, but by His. He has redeemed us, ransomed us, set us free from the awful condition of bondage to which the curse of the law had brought us….

The ‘curse of the law’ from which Christ redeemed us must be the curse resting upon us for our disobedience (verse 10). And He redeemed us from it by ‘becoming a curse’ Himself. The curse was transferred from us to Him. He took it voluntarily upon Himself, in order to deliver us from it. It is this ‘becoming a curse for us’ which explains the awful cry of dereliction, of God-forsakenness which He uttered from the cross.

Of course such thoughts were scandalous to the Jews: the Messiah accursed of God, and dying on a tree? No wonder they so fiercely rejected the gospel message. As Richard Longenecker says about this:

For Jews, the proclamation of a crucified Messiah was scandalous (cf. 1 Cor. 1:23; Gal. 5:11), “a blasphemous contradiction in terms” (Bruce). Undoubtedly the central problem for all Jewish Christians was how to understand Jesus as God’s Messiah and yet as cursed by God, with the magnitude of the problem only heightened by the pronouncement of Deut. 21:23. The process as to how early Christians came to understand Jesus as both Messiah and accursed may be obscure, but their conclusion is clear: the curse of the cross was “an exchange curse” wherein Christ became a curse for us (cf. esp. 2 Cor 5:21). And it is just such an assertion that appears in 3:13a, which we believe is probably an early Christian confession used by Paul.

Let me finish with some thoughts on substitution from John Stott. Chapter 6 of his superb book, The Cross of Christ, is entitled, “The self-substitution of God.” Part of what he says there is worth quoting at length:

If the essence of the atonement is substitution, at least two important inferences follow, the first theological and the second personal. The theological inference is that it is impossible to hold the historic doctrine of the cross without holding the historic doctrine of Jesus Christ as the one and only God-man and Mediator. As we have seen, neither Christ alone as man nor the Father alone as God could be our substitute. Only God in Christ, God the Father’s own and only Son made man, could take our place. At the root of every caricature of the cross there lies a distorted Christology. The person and work of Christ belong together. If he was not who the apostles say he was, then he could not have done what they said he did. The incarnation is indispensable to the atonement. In particular, it is essential to affirm that the love, the holiness and the will of the Father are identical to the love, the holiness and the will of the Son. God was in Christ reconciling the world to himself….

The second inference is personal. The doctrine of substitution affirms not only a fact (God in Christ substituted himself for us) but its necessity (there was no other way by which God’s holy love could be satisfied and rebellious human beings could be saved). Therefore, as we stand before the cross, we begin to gain a clear view of God and of ourselves, especially in relation to each other. Instead of inflicting on us the judgment we deserved, God in Christ endured it in our place. Hell is the only alternative. This is the “scandal,” the stumbling block, of the cross. For our proud hearts rebel against it. We cannot bear to acknowledge either the seriousness of our sin and guilt or our utter indebtedness to the cross. Surely, we say, there must be something we can do, or at least contribute, in order to make amends? If not, we often give the impression that we would rather suffer our own punishment than the humiliation of seeing God through Christ bear it in our place….

But we cannot escape the embarrassment of standing stark naked before God. It is no use for us to try to cover up like Adam and Eve in the garden. Our attempts at self-justification are as ineffectual as their fig leaves. We have to acknowledge our nakedness, see the divine substitute wearing our filthy rags instead of us, and allow him to clothe us with his own righteousness. Nobody has ever put it better than Augustus Toplady in his immortal hymn ‘Rock of Ages’:

Nothing in my hand I bring,
Simply to your Cross I cling;
Naked, come to you for dress;
Helpless, look to you for grace;
Foul, I to the fountain fly;
Wash me, Savior or I die.