Is Peter offering us a type of pantheism, or New Age teaching in this passage?

Peter uses a phrase in this passage that is not found elsewhere in the New Testament. While similar sorts of thoughts are found elsewhere, the wording is unique to this text. Let me here offer three recent translations of this passage, with the phrase in question in bold:

“Through these he has given us his very great and precious promises, so that through them you may participate in the divine nature, having escaped the corruption in the world caused by evil desires.” (NIV)

“by which he has granted to us his precious and very great promises, so that through them you may become partakers of the divine nature, having escaped from the corruption that is in the world because of sinful desire.” (ESV)

“By these He has given us very great and precious promises, so that through them you may share in the divine nature, escaping the corruption that is in the world because of evil desires.” (HCSB) 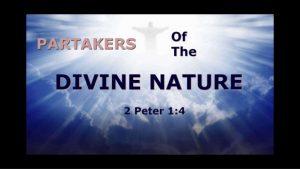 The difficulty here has to do with how we understand this idea of participating in, or sharing in, or becoming partakers of, the divine nature. This has a somewhat unbiblical ring to it, seemingly more in line with concepts found in eastern religious thought and the like, or in various cultic and heretical groups.

Just what is being argued for here? Do Christians become god, or gods, or something like that? Is this taking us in the direction of pantheism, Gnosticism, or New Age teaching, with the material world seen as evil, something that we must escape from or transcend? Does our salvation as Christians involve some sort of deification?

The short answer to these questions is no – that is not what Peter has in mind by this phrase. Yes, that was a commonly held way of thinking by various pagan schools of thought back then. The idea was that people had to escape an evil material world by somehow becoming divine. But this is not the idea Peter is teaching here.

As I elaborate upon this, I am going to do something a bit different from most of the articles in this series. I will – as usual – offer some standard evangelical Protestant responses and commentary, but I will also examine how Eastern Orthodoxy (not to be confused with eastern religions), understands a text like this.

Concerning Protestant thought on this, Richard Baukham says there are two main questions that must be asked here: “In what sense do Christians become ‘divine’?” and “When do Christians become partakers of divine nature?” While Protestants can differ on some of these matters, most take a view which is similar to that of the following commentators.

Michael Green for example says the phrase in question is “a claim without equal in the New Testament.” He goes on to say that

we must preserve the awesome distance between the creator God and everything and everyone he makes. To say we are God, or become God, would be a shocking misinterpretation of Peter. Nevertheless, we should still marvel with Calvin that ‘it is the purpose of the gospel to make us sooner or later like God; indeed it is, so to speak, a kind of deification’. Peter is able to promise far more than the false teachers can ever do, because he is pinning his faith on the promises of God. This participation in the divine nature is solely an act of God’s graciousness, his undeserved generosity, in order that we might escape the corruption in the world caused by evil desires.

Ben Witherington says this about the phrase: “(1) It involves union with God, not divination of the human. (2) It involves a work of grace in the believer so that one can become godlike. It thus means participation in eternal life and eternal goodness and eventually involves everlasting life and an incorruptible body.”

And Douglas Moo offers this commentary. He says Peter was willing to use Greek language and concepts that his readers would have been familiar with, but he “fills it with Christian content. Similarly, ‘participating in the divine nature’ will not mean the merging of one’s personality into the person of the Godhead. Put in its Christian context and worldview, it is a vivid way of reminding believers that they have the Holy Spirit residing in their hearts and that they can therefore begin to manifest some of those qualities that are characteristic of God himself: holiness, love, compassion, godliness.”

In the Eastern Orthodox tradition there is plenty of discussion about things such as “theosis,” or deification, or divinisation. This is the process of transformation wherein the believer comes into likeness or union with God. It does not mean we merge into God’s essence, or cease from sin, but it refers to a mystical union with God.

A related passage often referred to is John 17:22-23: “The glory which You have given Me I have given to them, that they may be one, just as We are one; I in them and You in Me, that they may be perfected in unity, so that the world may know that You sent Me, and loved them, even as You have loved Me.”

If by all this Eastern believers meant mainly what Western believers mean by sanctification, there would be no real problems here. But for some the concept of theosis goes further than this. But let me offer a few quotes on this, showing that even here many will not go in the direction of a wrongly understood – ie., unbiblical – concept of divination.

Specifically, let me offer a few quotes on this matter from those who are writing directly about the notion of theosis in Eastern Christian thought. Michael Gorman puts it this way:

Although the Eastern Christian tradition has spoken of “becoming God/god,” it has also made it clear that theosis does not mean that people become little gods; nor does it mean apotheosis, the unchristian notion of the post-mortem promotion of certain humans (heroes, emperors, etc.) to divinity. Rather, theosis means that humans become like God. The tradition of theosis in Christian theology after the New Testament begins with the famous dictum of Irenaeus, later developed by Athanasius: “God became what we are to make us what he is.” Theosis is about divine intention and action, human transformation, and the telos of human existence – union with God.

Let me now offer one quote each from three writers discussing the notion of deification in Christian tradition in a book edited by Christensen and Wittung (see details below). In his chapter on “The problem, promise, and process of theosis,” Michael Christensen says this:

In the Orthodox Study Bible, on a page between 1 and 2 Peter entitled “Deification,” are these words of theological qualification:

“What deification is not: When the Church calls us to pursue godliness, to be more like God, this does not mean that human beings become divine. We do not become like God in His nature. That would not only be heresy, it would be impossible. For we are human, always have been human, and always will be human. We cannot take on the nature of God.”

Stephen Finlan, writing about theosis in Paul, concludes his chapter with these words: “Note, however, that the believer does not become Christ. This is where Paul’s viewpoint is to be distinguished from a Gnostic one such as that in Corpus Hermeticum, where the mystic blends identities with a god. Becoming Christified does not mean becoming Christ, but rather Christlike in substance and character.”

Lastly, James Starr concludes his chapter which speaks directly on the text that we are considering here with these words:

What, then, are the answers to our questions? Does 2 Peter relapse into Hellenistic dualism? No. The author follows a Pauline and early Christian view of the world. Corruption is a consequence of sin, not something inherent to matter per se. A new earth is coming (3:13), and creation will be renewed. Second Peter is not simply repeating first-century Hellenistic philosophy….

Does 2 Peter mean deification? The answer to that question is that it depends on what is meant by deification. If the term means equality with God or elevation to divine status or absorption into God’s essence, the answer is no. If it means the participation in and enjoyment of specific divine attributes and qualities, in part now and fully at Christ’s return, then the answer is — most certainly — yes.”

For much more discussion on this, two other books, plus the two that I just quoted from, are all well worth getting. They are:

From all this it should be clear that Peter is not teaching something that would please those from pantheistic, eastern religions, or from the New Age Movement. He is instead offering us here traditional Christian teaching, fully in line with the other New Testament writers.

While he certainly uses a unique phrase, it must be seen in the light of the rest of Scripture. And becoming at least somewhat aware of the third main Christian tradition – Eastern Orthodoxy – can be a helpful endeavour as we seek to better understand this and other biblical passages.