Another peaceful pro-life march, and another handful of demonised haters:

We have two things constantly going on in the West: we have reality and the truth on the one hand, and we have the mainstream media’s spin on things on the other. There is the real world, and then there is fake news. This glaring contrast is found in so many areas, but especially when it comes to something like the abortion wars.

There is the reality about what abortion is and what it does, and then there is the media – two completely different things in most cases. And for a perfect example of this, consider what just took place only a few hours ago in Melbourne. A prolife march was held in the city, and then there was the MSM coverage of that march – here we have the difference between night and day. 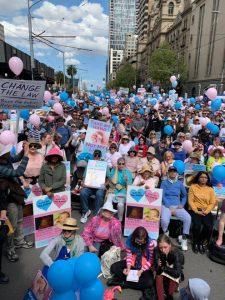 If you were actually at the march you would have experienced one reality. If you only learned about the march from what you saw on the evening news, you witnessed an altogether different reality – indeed, a fake reality, one created entirely by leftist journalists and news editors.

Let me run with the latter first. If you saw a short piece on the prolife march on the Ch 7 or Ch 9 news at 6pm, this is the clear impression you would have got from their coverage: several hundred people on both sides of the divide angrily abused and attacked each other, with non-stop chaos resulting.

Militant pro-abortionists were dealing with militant pro-lifers. Both sides were equally obnoxious, pugilistic and irate. The two clashed on the city streets, and the police had to deal with both angry mobs. That was basically the image you would have got of the afternoon from these two media outlets.

Now let me tell you what really happened. And I should know, since I was there, along with so many others. The actual reality of the event was light-years removed from these bogus media reports. What we had was 3-4000 calm, peaceful, happy and loving pro-lifers, and 25-30 screaming, hate-filled, cursing pro-deathers!

The pro-lifers had of course gotten official permission to have their peaceful and joyous march. It was all done according to the book. But a handful of ferals and professional agitators showed up, determined to prevent the march from happening, and to make it as difficult as possible for those who were there to enjoy the afternoon and to hear the speakers.

We had what seemed to be all the usual suspects: unemployed youth, perennial uni students, professional militants, rent-a-crowd types, and assorted riff-raff. As well we had – no surprises here – the Sex Party leader Fiona Patten and the “Safe Schools” Marxist agitator Roz Ward.

I saw Ward urging on her young charges, screaming and shouting abuse, along with the others. Most of the inane and ugly chants were so filled with ugly, diabolical filth and obscenities that I cannot print them here. They screamed at the top of their lungs, repeated non-stop vile bile, banged on their drums, shouted through their bullhorns, and did all they could to disrupt the peaceful march.

Thankfully the police did a terrific job of keeping these screaming banshees away from the rest of us. I felt sorry for the police who had to do this, including some mounted police on incredibly patient and well-disciplined horses who had to face these militant, obscene thugs for several hours. They all deserve a medal.

The march itself was the 10th annual March for the Babies, commemorating one of the darkest days in Victoria’s history: when a ghastly and gruesome pro-abortion bill was passed in 2008, allowing open slather on abortion, right up to birth. So horrific is this legislation that for ten years now we have been holding these peaceful protests to draw attention to it, and to hopefully see it being repealed one day.

As always the indefatigable Bernie Finn, Liberal MP from Melbourne’s west, led the proceedings. He was aided and abetted by young pro-life superstar Moira Deeming. These two folks are champions, bar none, and we all owe them a debt of gratitude.

After a march through downtown Melbourne for around 40 minutes, we congregated in front of Parliament House on Spring Street. Various speakers joined in onstage, including Heidi Bui, Nathaniel Smith, as well as Moira and Bernie. Beautiful weather blessed the event, and it finished, as usual, with a stirring rendition of Amazing Grace.

Indeed, one thing that really struck me once again – and I have been to a majority of these marches now – was the incredibly calloused, jaded and jaundiced nature of those on other side: those who were so utterly full of hatred and completely consumed with bitterness and rage. Just imagine what we had here: a few dozen activists screaming themselves hoarse – and for what? For death!

They were screaming continuously for hours as they celebrated, promoted, endorsed and championed one thing: death. They were there to push this with all their might: death, killing, murder, the destruction of vulnerable and innocent unborn babies. How does one get to that place of demonic rage and hatred for the most wonderful thing there is – human life?

How does this happen? What can turn a human being – one who once emerged from his or her own mother’s womb – into a cold, calculating hating machine. Their hearts seem to have been turned into stone. They have lost their humanity. So hardened are they that it seems that about all we can do is pray for them.

When I walked past Ward and her minions screaming the most hideous and foul abuse, I said back to them, “God bless you. God bless you.” All we can do is pray that God will break into these hearts of stone and give them hearts of flesh. This is not just a political or cultural battle. At the end of the day this is a full-on spiritual battle.

We are dealing with principalities and powers here. We are dealing with dark forces that need spiritual attention. Please join with me in praying for these folks. Some yet might come around. It will be nothing short of miraculous if we see some of these turn from being hateful champions of death into loving champions of life. But our God is a miracle-working God.

And while you are at it, please pray for the media. We need a major breakthrough here as well, with all the lies and falsehoods rooted out, and truth and integrity being presented instead.

Thanks to all of you who came to stand up for the unborn today. Bless you. I hope to see you next year.

36 Replies to “Abortion, the Media, and the War on Truth”