Such a contrast: while the West is dying, God is mightily at work in places like Ghana:

The longer I stay in Ghana – and it has only been three days so far – the more ashamed I am to call myself a Western Christian. So much of the faith of these African believers stands in such marked contrast to what we find in Australia and the West. 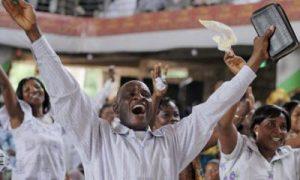 They care greatly about their God and their faith. And they care about the things that matter, not all the fluff and superficiality that we believers tend to run with in the West. I have already met quite a few Christians here in Accra, and I am certainly impressed.

To tell the truth, they put most Western believers to shame. They seem sold out for the Lord and his word, and not to the world. Indeed, they are not enamoured with all things worldly, as so many Western Christians seem to be. Their allegiance is to the one true God.

The great majority of the country is Christian (around 77 per cent) and they seem to be on fire, dedicated to the Lord, and willing to stand up against the agenda items that have wreaked havoc in the West. Like most Africans, they really are dead-set against the anti-family agendas found throughout the West.

They do NOT accept that homosexuality is somehow a good thing or a natural thing, or a desirable thing. As we find in a Wikipedia article: “Homosexual acts are prohibited by law in Ghana. According to 2013 survey by the Pew Research Center, 96% of Ghanaians believe that homosexuality should not be accepted by society.”

As I said to one gathering of Ghanaian and African movers and shakers, the law can do one of three things: prevent, permit, or promote. I told my audience that many folks thought that if the West moves from prohibition to permission concerning homosexuality, everything would be just fine, nothing would change, and it would be a sign of progress.

But as I will share more fully on Friday morning at an even larger pro-family conference, permission never lasts long. It invariably – and rather quickly – moves to promotion. What was once objectionable and illegal now becomes compulsory. Governments and other coercive bodies quickly start to force this lifestyle down the throats of everyone.

Now we find this throughout the West. The ‘good’ guys are all the militants and activists, while the ‘bad’ guys are all those who refuse to bow the knee to the radical homosexual and trans agendas. We are ‘haters’ who must be punished for not going along with this tidal wave of depravity and immorality.

I encouraged my audience, urging them to continue to stand strong and reject the avalanche of evil that the West has allowed to take over. And I apologised for what the West has done in its war on family, faith and freedom. Thankfully the folks here are firmly against these things, and they are seeking to mobilise against the activists who are already in Africa pushing these agendas – often from the UN and other international bodies.

And today was a very special day at the national parliament. A prayer breakfast was held and the truths of the gospel were soundly championed and declared. All up maybe 150 folks attended this prayer breakfast function at Parliament House – a first there I believe.

Present were a number of politicians, VIPs, church leaders and various important stakeholders. After it finished around a dozen of us met with the Speaker of the Parliament who is a very keen Christian and fully against allowing Ghana to be taken over by the militant homosexual agenda.

I was able to give him my two books on homosexuality, and we prayed for him and thanked him for standing strong. Once again, the entire experience so very much contrasted with things back in Australia. I have attended a number of national prayer breakfasts at Parliament House in Canberra, and they are so weak and anaemic when compared to what I witnessed today.

Here politicians and Christian leaders alike fully stood up for God and his word, and fully announced their opposition to the radical sexual agendas. Power prayers and speeches were given, and the place was clearly filled with the presence of God.

Not so the Australian counterpart. It has been going downhill for years now, with compromise and carnality and little of gospel truth. It is all about tolerance and being nice and not offending anyone. African Christians will have none of that nonsense.

They intend to stand up for truth and morality, and will not allow perverse Western social, cultural, and political agendas to come into their country. And in many ways Ghana is leading the way here. As they stand so very strong, they will be a real light to the rest of Africa.

The next two days the World Congress of Families regional conference will take place. I will speak at the conference, along with a number of others who are pro-family champions from Ghana, other parts of Africa, and a few from further beyond.

Sharon Slater of Family Watch International and Brian Brown of the National Organization for Marriage will join various local and regional family experts and lobbyists. The two days will be the first African regional conference. Details are found here: wcfaccraghana.org/

Tomorrow morning I will have to leave the conference for a bit as I get driven to the main Ghana national tv station to get interviewed – one other speaker may also be interviewed as well. This may be a live interview, nation-wide, so I covet your prayers for that.

It feels like old times. I used to get regular media attention in Australia to talk on family issues. Often I had daily media engagements. But most of that has dried up now. This is in part because the radical agendas of the left are now so firmly established in Australia, that voices like mine are seldom wanted anymore.

So to have media folks keen to hear my views on these hot potato topics remind me of my previous pro-family lobby work. Once again, such a contrast to the secular left West. Here they actually want to hear what folks like I have to say on these issues. Back home I am just seen as a trouble maker and hater.

The contrasts are many. It is so good to be in a land where family and faith are held in such high regard. In the West they are basically detested, despised, persecuted, and seen as hinderances to progress. Praise God that he is at work in Ghana, seeking to turn the tide of all the mischief and mayhem the West has caused.

As I have said before, things have now gone full circle. Europe and the West were once the place of missionary-sending nations. Thankfully the gospel did take hold in so much of Africa, Asia and Latin America. So now as the West is losing the faith so rapidly, God is using places like Africa to once more shed light in a dark world.

The spiritual centre of gravity has well and truly left the West, and the beacons of light are now nations like Ghana. And as they now fight these damaging agendas, they will in turn help the West to hopefully recover its senses, and start rejecting all this madness and immorality.

While the very long trip over here was all rather unpleasant, it was worth it to be here and see God at work launching these new initiatives to keep Ghana and Africa free of the fearful fate that has befallen the West. It is humbling to be playing a very small role in the very big move of God here.

I have already met so many African heroes here. They are such an inspiration. God bless you all and never give up.

21 Replies to “Ghana, Christianity, Culture Wars and the West”