It was commonplace for the early believers to cause upheaval and riots – how do we compare?

Contradiction? Nope. The key word was “deliberately”. We are not to go around seeking to cause fights and get folks all shook up. But if we faithfully serve our Lord, no matter how gracious and irenic we may try to be, fights will erupt and folks will get shook up. 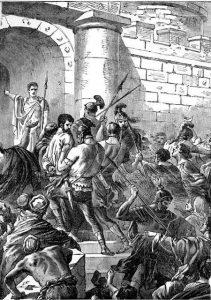 So if you simply live a life of integrity as a believer, you will offend and upset those who are not living that way. If you simply proclaim biblical truth – that we are all sinners in need of a saviour – that will get people angry and out of joint.

Simply reading the gospel accounts makes this perfectly clear. The most pure, righteous and holy man to walk the earth constantly got people angry and incensed. Darkness never likes the light. And of course the disciples found this to be the case as well.

You already see this being played out in the gospels, but it occurs big time in the book of Acts. Having just finished reading through this again, I was struck not just by the constant hatred and derision they had to endure, but time after time they ended up causing a riot, all because they faithfully proclaimed Christ.

Consider for example what happened when Paul was preaching the gospel in Thessalonica. We read this in Acts 17:1-9:

When Paul and his companions had passed through Amphipolis and Apollonia, they came to Thessalonica, where there was a Jewish synagogue. As was his custom, Paul went into the synagogue, and on three Sabbath days he reasoned with them from the Scriptures, explaining and proving that the Messiah had to suffer and rise from the dead. “This Jesus I am proclaiming to you is the Messiah,” he said. Some of the Jews were persuaded and joined Paul and Silas, as did a large number of God-fearing Greeks and quite a few prominent women.

But other Jews were jealous; so they rounded up some bad characters from the marketplace, formed a mob and started a riot in the city. They rushed to Jason’s house in search of Paul and Silas in order to bring them out to the crowd. But when they did not find them, they dragged Jason and some other believers before the city officials, shouting: “These men who have caused trouble all over the world have now come here, and Jason has welcomed them into his house. They are all defying Caesar’s decrees, saying that there is another king, one called Jesus.” When they heard this, the crowd and the city officials were thrown into turmoil. Then they made Jason and the others post bond and let them go.

And in Acts 21 we read about Paul and his arrest in Jerusalem. Here is just part of that account (verses 27-32):

When the seven days were nearly over, some Jews from the province of Asia saw Paul at the temple. They stirred up the whole crowd and seized him, shouting, “Fellow Israelites, help us! This is the man who teaches everyone everywhere against our people and our law and this place. And besides, he has brought Greeks into the temple and defiled this holy place.” (They had previously seen Trophimus the Ephesian in the city with Paul and assumed that Paul had brought him into the temple.) The whole city was aroused, and the people came running from all directions. Seizing Paul, they dragged him from the temple, and immediately the gates were shut. While they were trying to kill him, news reached the commander of the Roman troops that the whole city of Jerusalem was in an uproar. He at once took some officers and soldiers and ran down to the crowd. When the rioters saw the commander and his soldiers, they stopped beating Paul.

We read about other riots breaking out, such as the very rough and tumble riot in Ephesus as recorded in Acts 19:23-41. In Acts 24 we read about religious leaders bringing charges against Paul before Felix. They say this, in part (verses 5-6): “We have found this man to be a troublemaker, stirring up riots among the Jews all over the world. He is a ringleader of the Nazarene sect and even tried to desecrate the temple; so we seized him.”

And when Paul writes to the churches he actually boasts about these riots. He has various hardship lists in which he glories in his sufferings for Christ. One such list is found in 2 Corinthians 6. In verse 3-5 we read this: “We put no stumbling block in anyone’s path, so that our ministry will not be discredited. Rather, as servants of God we commend ourselves in every way: in great endurance; in troubles, hardships and distresses; in beatings, imprisonments and riots; in hard work, sleepless nights and hunger;…”

Riots and the like were all in a day’s work for the Apostle, just as it was for his Master. They should be for all his followers as well. Our life, our testimony, our witness, and our proclamation should provoke a reaction – and often that will be a very negative reaction.

Again, we are not to be belligerent for the sake of being belligerent, and we should not be trouble-makers just for the fun of it. But we should be prepared for negative reactions to happen when we faithfully and persistently stand up for Christ in a dark and hostile world.

Such WILL be the reaction of many to our Christian life and our Christian witness – always has been, always will be. The early Salvos for example sure knew all about this. Salvation Army co-founders William and Catherine Booth knew all about hostile and demonic reactions as they proclaimed biblical truth.

I love to quote from her book, Aggressive Christianity. Here are three quotes from this collection of her powerful sermons:

Oh! People say you must be very cautious. You must not push religion down people’s throats. What! Should I wait until an unconverted, godless man wants to be saved before I try to save him? Am I to let my unconverted friends and acquaintances go quietly down to damnation, and never tell them about their souls until they ask, “If you please, I want you to preach to me!” Is this anything like the spirit of early Christianity? No! Therefore we must make them look, and if they run away from you in one place, meet them in another, and let them have no peace until they submit to God. This is what Christianity ought to be doing in this land, and there are plenty of Christians around to do it. Why, we might give the world such a time of it, that they would get saved in self-defense – if we were only aggressive enough and determined that they should have no peace in their sins.

Opposition! It is a bad sign for the Christianity of this day that it provokes so little opposition. If there were no other evidence of it being wrong, I should know from that. When the Church and the world can jog along together comfortably, you may be sure there is something wrong. The world has not altered. Its spirit is exactly the same as it ever was, and if Christians were equally faithful and devoted to the Lord, and separated from the world, living so that their lives were a reproof to all ungodliness, the world would hate them as much as it ever did. It is the Church that has altered, not the world.

The interests of truth demand this outspokenness. How is error to be met but by the bold proclamation of the truth? How the emissaries of Satan are palming upon mankind his lies – always at it, night and day. How are they to be silenced but by witnesses faithfully crying in their ears, ‘This is a lie, and that is a lie. This is the truth and this is the way. We know, we see, we feel – walk in it. Turn, turn, for why would you want to die?’ God wants outspoken witnesses. There are plenty of false witnesses now, as there ever were, and what does Jesus Christ want? He wants His true witnesses to come out and face them, and be a match for them – not to sneak away in holes and corners, and be ashamed of their religion, and talk about an ‘unobtrusive religion’ – unobtrusive nonsense. There is no such thing! Come out before the world.

One Reply to “So How Many Riots Have You Caused?”