Some meditations of the wonders of the Christmas story:

For two millennia Christians have celebrated the birth of Jesus. Millions of words have already been offered on this story of stories, and millions more likely will be. Of course the main accounts of this event are found in the four Gospels and the rest of the New Testament. Moreover, it is foreshadowed and predicted in the Old Testament.

A quick search of my own website reveals that I already have 175 articles fully or partially devoted to the Christmas story. In one of those articles I asked these questions, “Why did Jesus visit this planet, and what did he seek to do while here?” I went on to say that there are plenty of wrong and reckless answers, such as: 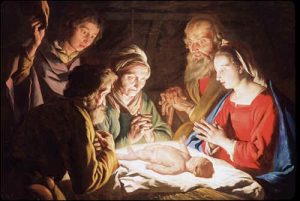 So why then did Jesus come? Let me answer that – and seek to explain the Christmas story – by drawing on the wisdom of others – others who have written so wondrously and so beautifully on the Christmas story. Running in chronological order, I will mention just a bit about each writer, and offer some of their quotations. I trust they will be a blessing to you as they have been to me.

The great church father Athanasius (c. 296 – 373) offered deep theological insights into the story, especially in his most famous work, On the Incarnation. Just one quote from him:

“The gaping chasm between God and human beings – which human reason has perceived and before which it has trembled – has been bridged by this infant’s merest yawn.”

Another hugely important church father was Augustine (354 – 430). He said much on this topic, including in his sermons. Here are a few quotes from them:

“Maker of the sun, He is made under the sun. In the Father He remains, from His mother He goes forth. Creator of heaven and earth, He was born on earth under heaven. Unspeakably wise, He is wisely speechless. Filling the world, He lies in a manger. Ruler of the stars, He nurses at His mother’s bosom. He is both great in the nature of God, and small in the form of a servant.”

“He so loved us that for our sake He was made man in time, through Whom all times were made; was in the world less in years than His servants, though older than the world itself in His eternity; was made man, Who made man; was created of a mother, whom He created; was carried by hands which He formed; nursed at the breasts which He had filled; cried in the manger in wordless infancy, He the Word without Whom all human eloquence is mute.”

“He lies in a manger, but contains the world. He feeds at the breast, but also feeds the angels. He is wrapped in swaddling clothes, but vests us with immortality. He found no place in the inn, but makes for Himself a temple in the hearts of believers. In order that weakness might become strong, strength became weak.”

The Reformers can also be cited. Just one quote from Martin Luther (1483 – 1546), who wrote this for his children at Christmas:

“What the globe could not enwrap,
Nestled lies in Mary’s lap.
Just a baby, very wee,
Yet Lord of all the world is he.”

“Though creation may be a majestic organ of praise, it cannot reach the compass of the golden canticle—Incarnation! There is more in that than in creation, more melody in Jesus in the manger, than there is in worlds on worlds rolling their grandeur round the throne of the Most High.”

“The greatest and most momentous fact which the history of the world records is the fact of Christ’s birth.”

“Infinite, and an infant. Eternal, and yet born of a woman. Almighty, and yet hanging on a woman’s breast. Supporting a universe, and yet needing to be carried in a mother’s arms. King of angels, and yet the reputed son of Joseph. Heir of all things, and yet the carpenter’s despised son. Oh, the wonder of Christmas.”

“Christmas is built upon a beautiful and intentional paradox; that the birth of the homeless should be celebrated in every home.”

“The exciting quality of Christmas rests on an ancient and admitted paradox. It rests upon the paradox that the power and center of the whole universe may be found in some seemingly small matter, that the stars in their courses may move like a moving wheel around the neglected outhouse of an inn.”

If the stars fell; night’s nameless dreams
Of bliss and blasphemy came true,
If skies were green and snow were gold,
And you loved me as I love you;

O long light hands and curled brown hair,
And eyes where sits a naked soul;
Dare I even then draw near and burn
My fingers in the aureole?

Yes, in the one wise foolish hour
God gives this strange strength to a man.
He can demand, though not deserve,
Where ask he cannot, seize he can.

But once the blood’s wild wedding o’er,
Were not dread his, half dark desire,
To see the Christ-child in the cot,
The Virgin Mary by the fire?”

“The central miracle asserted by Christians is the Incarnation. . . . If the thing happened, it was the central event in the history of the earth.”

“… God descends to re-ascend. He comes down; down from the heights of absolute being into time and space, down into humanity … down to the very roots and sea-bed of the Nature He has created. But He goes down to come up again and bring the ruined world up with Him. One has the picture of a strong man stooping lower and lower to get himself underneath some great complicated burden. He must stoop in order to lift, he must almost disappear under the load before he incredibly straightens his back and marches off with the whole mass swaying on his shoulders.”

“Once in our world, a stable had something in it that was bigger than our whole world.”

“You can never truly enjoy Christmas until you can look up into the Father’s face and tell him you have received his Christmas gift.”

“Who can add to Christmas? The perfect motive is that God so loved the world. The perfect gift is that He gave His only Son. The only requirement is to believe in Him. The reward of faith is that you shall have everlasting life.”

“Christmas is based on an exchange of gifts, the gift of God to man – His unspeakable gift of His Son, and the gift of man to God – when we present our bodies a living sacrifice.”

“The very purpose of Christ’s coming into the world was that he might offer up his life as a sacrifice for the sins of men. He came to die. This is the heart of Christmas.”

“It is impossible to conceive how different things would have turned out if that birth had not happened whenever, wherever, however it did … for millions of people who have lived since, the birth of Jesus made possible not just a new way of understanding life but a new way of living it. It is a truth that, for twenty centuries, there have been untold numbers of men and women who, in untold numbers of ways, have been so grasped by the child who was born, so caught up in the message he taught and the life he lived, that they have found themselves profoundly changed by their relationship with him.”

“The Almighty appeared on earth as a helpless human baby, needing to be fed and changed and taught to talk like any other child. The more you think about it, the more staggering it gets. Nothing in fiction is so fantastic as this truth of the Incarnation.”

Many more such inspirational quotes could be offered here. These are some of my favourites. Merry Christmas one and all, and may the true meaning of this amazing time never be lost on any of us.

12 Replies to “The Glory of Christmas”