Terrific truths and appalling lies were both heard at the Golden Globes:

OK, a few disclaimers here. I am not a Hollywood culture vulture, nor do I spend much time watching things like awards’ shows. I am not even sure of the difference between an Emmy and an Oscar. And I did not watch the recent 77th Golden Globe Award ceremony – not a moment of it.

But like so many others, I have since seen some highlights from it. Even from just seeing a few of these, it is clear that there were some standout moments in which truth was actually proclaimed. But there were also some atrocious moments when the dark, ugly side of the Hollyweird crowd was fully on display. 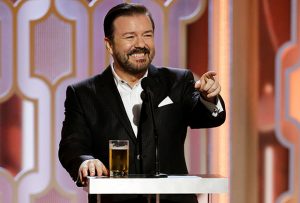 As far as the good stuff goes, the obvious winner from the night came in the form of the remarks made by the host, English comedian and actor Ricky Gervais. Evidently, he has hosted this show before, and is known for his sharp wit and his take-no-prisoners approach to dealing with his audience.

He did not disappoint on Sunday night, taking swipes at plenty of the egotistical and overly-paid big wigs there, including Hollywood crim Felicity Huffman, and sexual deviant Jeffrey Epstein. And he targeted some of those who were so very proud of their leftist credentials:

“Apple rolled into the TV game with a superb drama about the importance of dignity and doing the right thing, made by a company that runs sweatshops in China. So, you say you’re woke, but the companies you work for, unbelievable. Apple, Amazon, Disney. If ISIS started a streaming service, you’d call your agent, wouldn’t you?”

But the super-highlight of the night came when he said this:

“If you do win an award tonight, don’t use it as a platform to make a political speech. You’re in no position to lecture the public about anything. You know nothing about the real world. Most of you spent less time in school than Greta Thunberg. If you win, come up, accept your little award, thank your agent and your god, and f**k off.”

As I just told a friend earlier today, it is really neat when truth makes it into the public arena from quite unexpected sources. I know little about Gervais, but as far as I can tell he is no diehard conservative. And it appears that he certainly is not a Christian either. But boy, he sure nailed it there – massively.

Indeed, just to see big cheese celebs like Tom Hanks squirming in their seats when he was saying this made my day. Good on ya Ricky. One word of truth outweighs all the pious claptrap that we hear from most of the other megalomaniac celebs there. You can see his remarks here: www.hollywoodreporter.com/news/ricky-gervais-golden-globes-monologue-gets-political-1266308

And sadly most of them fully ignored his advice. They went on with all their stupid PC speeches, including whining about climate change and all the examples of the latest cause célèbre. It is as predictable as it is tiresome to hear these filthy rich – and often filthy-tongued – hot shots lecturing us on morality and ethics. Puh-leeese, spare me.

Indeed, these sermons delivered from on high by these folks were among the many lowlights of the night. So much pontificating and moralising by some of the most immoral and shallow people in the nation. All these lectures about how others should live frugally and greenly while they ignore everything they just said and fly around in their private jets and so on. Just shut up already.

But out of so many lows, this had to be the absolute lowest of the evening, when another celeb that I never heard of implied that she killed her own babies so she could ‘make it’ in Hollywood. Yep, you heard me right. Actress Michelle Williams said this after winning an award for something:

“As women and as girls things can happen to our bodies that are not our choice. I’ve tried my very best to live a life of my own making and not just a series of events that happened to me, but one that I could stand back and look at and recognize my handwriting all over it – sometimes messy and scrawling, sometimes careful and precise, but one that I have carved with my own hand. I wouldn’t have been able to do this without employing a woman’s right to choose.”

And the only thing worse was the fact that she was clearly pregnant as she was gloating over her “right to choose”. Indeed, she went on to say this: “So women, 18 to 118, when it is time to vote, please do so in your own self-interest; it’s what men have been doing for years.” Killing your own baby is the height of self-interest all right.

What an utterly debauched and depraved culture we find ourselves in when a woman can get up before a crowd and celebrate the fact that she can kill her own children in order to succeed in her career – in this case, to make it big in Hollywood.

Of course she is not alone in this – millions of other mothers have done exactly the same thing. As I wrote last year about another woman in a similar position:

Here we have a seemingly intelligent and progressive young woman celebrating the fact that she is really making it big because she was willing to kill her very own baby to achieve it. But the answer is surely never to kill the baby. Adoption is always an option. Indeed, there are far more families wanting to adopt babies than there are babies available. So just because the mother does not want the baby does not mean it is unwanted by everyone else. Many would desperately love to be able to raise, nurture and care for the baby. But it seems selfishness reigns supreme here. billmuehlenberg.com/2019/06/10/celebrating-murder-look-what-it-did-for-my-career/

As always, we can and should pray for such folks. Pray that they get a revelation of the heart of God on this, and learn about the sanctity of life, the brevity of earthly careers, and the need to get our priorities right.

And since God can even use Balaam’s ass to speak truth, pray that he raises up more people like Ricky Gervais to get some truth out to where it is desperately needed. And pray that they all might come to know God through Christ as well.