The growth of the state usually means the demise of the church:

A few days ago I penned yet another piece seeking to make the case for Christian social and political involvement. Unlike some believers who think that Christians should have nothing to do with politics and the surrounding culture, the New Testament makes a strong case that we should be involved. But see that piece here: billmuehlenberg.com/2020/01/07/politics-and-the-gospel/ 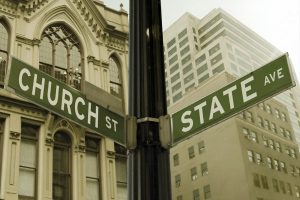 Quite so. The church as a whole and individual Christians will always have some sort of relationship with the culture they live in, including the state. It may be a more or less amicable relationship, an uneasy one, or an antagonistic and hostile one.

In the West we seem to be moving through that progression: as the surrounding culture becomes more and more secular and the state grows in power and authority, often the church is seen as a threat, and must be kept in its place. Of course various totalitarian societies have long seen the church as a rival, and dealt with it accordingly.

But the West is moving in that direction as well, and Christians need to think carefully about this, and how they will respond. Christian thinkers of recent times have done just that, and they have warned us about where we are heading. Let me draw upon just three of them here.

One problem with the expansive state is that the coercive utopians actually think that the power they wield over others is in their best interests. They seek to justify their statism by claiming it is good for people. Sure, they have a love of power and control, but they believe it is for our own good.

C. S. Lewis spoke to this often last century. In one article published in 1949 in an Australian journal he made these sorts of warnings. He was discussing “The Humanitarian Theory of Punishment” in which crime is considered a sickness instead of a moral evil, and so punishment is replaced with cures and therapies.

He writes, “If crime and disease are to be regarded as the same thing, it follows that any state of mind which our masters choose to call ‘disease’ can be treated as a crime and compulsorily cured.” It is in that context that he speaks about our coercive utopians:

It is, indeed, important to notice that my argument so far supposes no evil intentions on the part of the Humanitarian and considers only what is involved in the logic of his position. My contention is that good men (not bad men) consistently acting upon that position would act as cruelly and unjustly as the greatest tyrants. They might in some respects act even worse. Of all tyrannies a tyranny sincerely exercised for the good of its victims may be the most oppressive. It may be better to live under robber barons than under omnipotent moral busybodies. The robber baron’s cruelty may sometimes sleep, his cupidity may at some point be satiated; but those who torment us for our own good will torment us without end for they do so with the approval of their own conscience. They may be more likely to go to Heaven yet at the same time likelier to make a Hell of earth. Their very kindness stings with intolerable insult.

Francis Schaeffer also frequently warned against statism, and how the Christian faith is regarded as the major threat to absolute political power. In his very important 1975 volume, How Should We Then Live? he repeatedly warns us about this. In his opening chapter he writes:

Rome was cruel, and its cruelty can perhaps be best pictured by the events which took place in the arena in Rome itself. People seated above the arena floor watched gladiator contests and Christians thrown to the beasts. Let us not forget why the Christians were killed. They were not killed because they worshiped Jesus. Various religions covered the whole Roman world. One such was the cult of Mithras, a popular Persian form of Zoroastrianism which had reached Rome by 67 B.C. Nobody cared who worshiped whom so long as the worshiper did not disrupt the unity of the state, centered in the formal worship of Caesar. The reason the Christians were killed was because they were rebels. This was especially so after their growing rejection by the Jewish synagogues lost for them the immunity granted to the Jews since Julius Caesar’s time.

We may express the nature of their rebellion in two ways, both of which are true. First, we can say they worshiped Jesus as God and they worshiped the infinite-personal God only. The Caesars would not tolerate this worshiping of the one God only. It was counted as treason. Thus their worship became a special threat to the unity of the state during the third century and during the reign of Diocletian (284-305), when people of the higher classes began to become Christians in larger numbers. If they had worshiped Jesus and Caesar, they would have gone unharmed, but they rejected all forms of syncretism. They worshiped the God who had revealed himself in the Old Testament, through Christ, and in the New Testament which had gradually been written. And they worshiped him as the only God. They allowed no mixture: All other gods were seen as false gods.

And in his closing chapter he says this:

If we as Christians do not speak out as authoritarian governments grow from within or come from outside, eventually we or our children will be the enemy of society and the state. No truly authoritarian government can tolerate those who have a real absolute by which to judge its arbitrary absolutes and who speak out and act upon the absolute. This was the issue with the early church in regard to the Roman Empire, and though the specific issue will in all probability take a different form than Caesar-worship, the basic issue of having an absolute by which to judge the state and society will be the same.

My final witness is Peter Hitchens, brother of the late atheist Christopher. In his 2010 book The Rage Against God he says that Christianity is the real focus of the secularist statists because it is perceived as being the main threat to its lust for power:

The current intellectual assault on God in Europe and North America is in fact a specific attack on Christianity – the faith that stubbornly persists in the morality, laws, and government of the major Western countries. . . . The God they fight is the Christian God

God is the leftists’ chief rival. Christian belief, by subjecting all men to divine authority and by asserting in the words “My kingdom is not of this world” that the ideal society does not exist in this life, is the most coherent and potent obstacle to secular utopianism. . . . [T]he Bible angers and frustrates those who believe that the pursuit of a perfect society justifies the quest for absolute power.

The concepts of sin, of conscience, of eternal life, and of divine justice under unalterable law are the ultimate defense against the utopians’ belief that the ends justify means and that morality is relative. These concepts are safeguards against the worship of human power….

It is not widely recognized that secularism is a fundamentally political movement, which seeks to remove the remaining Christian restraints on power and the remaining traces of Christian moral law in the civil and criminal codes of the Western nations.

These three Christian thinkers certainly got it right. It is vital that all Christians do so as well. As the State grows in power and seeks to place everything under its control, this will always mean a direct attack on Christianity and on Christians. It has always been that way, and now we are seeing it played out in the West as well.

17 Replies to “As the State Grows the Church Shrinks”