One of the biggest problems we have today is worldliness in our churches:

Given all that Scripture has to say about the ungodly world around us, and how we must persistently and strenuously resist its siren calls, one has to marvel at all the Christians who nonetheless are fully at home in the world, who seem to get their marching orders from the world, and who have as their core values whatever the world at the moment is championing.

We see worldliness everywhere in our churches, and the incredibly sad reality is this: the thoughts, actions and beliefs of many who call themselves Christians today in the West are basically indistinguishable from those in the world. They appear to be one and the same in so many ways. 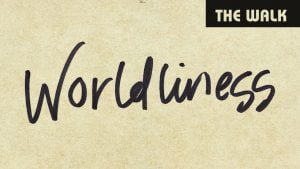 As mentioned, the Bible speaks so very often about the world and about worldliness, warning us to stay clear as we remain true to Christ and his Word. It should not be necessary for me to have to repeat these passages, but I guess I need to nonetheless. Here then are some of them:

2 Kings 17:15 They rejected his decrees and the covenant he had made with their ancestors and the statutes he had warned them to keep. They followed worthless idols and themselves became worthless. They imitated the nations around them although the Lord had ordered them, “Do not do as they do.”

Ezekiel 11:12 You have not followed my decrees or kept my laws but have conformed to the standards of the nations around you.

Ezekiel 20:32 You say, “We want to be like the nations, like the peoples of the world, who serve wood and stone.”

Romans 12:2 Do not conform to the pattern of this world, but be transformed by the renewing of your mind. Then you will be able to test and approve what God’s will is—his good, pleasing and perfect will.

2 Corinthians 6:17 Therefore, “Come out from them and be separate, says the Lord. Touch no unclean thing, and I will receive you

2 Timothy 4:10 For Demas, in love with this present world, has deserted me and gone to Thessalonica.

1 Peter 2:12 Live such good lives among the pagans that, though they speak against you as evildoers, they may see your good deeds, and glorify God in the day of visitation.

James 4:4 You adulterous people, don’t you know that friendship with the world is hatred toward God? Anyone who chooses to be a friend of the world becomes an enemy of God.

I John 5:19 We know that we are children of God, and that the whole world is under the control of the evil one.

Revelation 18:4 “And I heard another voice from heaven, saying, Come out of her, my people, that ye be not partakers of her sins, and that ye receive not of her plagues.”

Yet in spite of these passages – and many more like them – we seem to have one of the most worldly group of believers found in church history. So close to the world in emphasis, thought and deed are so many believers that no wonder so few pagans are dying to become Christians. Why should they?

When they see or hear nothing different in the churches than what they already know, why would they want to come to Christ? Why would they see the need for any sort of change? Anyway, the world does a much better job of being worldly than does the church, so why bother?

As Francis Schaeffer once put it, “Tell me what the world is saying today, and I’ll tell you what the church will be saying in seven years.” Exactly. Let me give you just a few examples of this:

That list could keep on going. So just stop already! Get off the world’s lousy bandwagon and get back on to Christ and on to his Word. Start to live, think and act like a follower of Jesus Christ instead of a follower of the world. Choose you this day who you will serve!

All the great saints of God have known these truths, so let me conclude with a few quotes from them:

“When the church is absolutely different from the world, she invariably attracts it. It is then that the world is made to listen to her message, though it may hate it at first.” Martyn Lloyd-Jones

“The church and the world have become so intertwined that it is hard to tell one from the other. The world has so affected the church’s moral standards that Christians say they believe in Christ and yet have never bothered to change their moral attitudes and standards at all.” A. W. Tozer

“God will not accept a divided heart. He must be absolute monarch. There is not room in your heart for two thrones. You cannot mix the worship of the true God with the worship of any other god more than you can mix oil and water. It cannot be done. There is not room for any other throne in the heart if Christ is there. If worldliness should come in, godliness would go out.” Dwight L. Moody

“When the church and the world can jog comfortably along together, you can be sure something is wrong. The world has not compromised – its spirit is exactly the same as it ever was. If Christians were equally as faithful to the Lord, separated from the world, and living so that their lives were a reproof to all ungodliness, the world would hate them as much as it ever did. It is the church that has compromised, not the world.” Catherine Booth

“People who claim to be Christians while their lives look no different from the rest of the world are clearly not Christians.” David Platt

12 Replies to “The World Leads, the Church Follows”