Grandiose green policies usually increase the power of the State while taking away our freedoms:

Last century C. S. Lewis made this important observation: “Of all tyrannies, a tyranny sincerely exercised for the good of its victims may be the most oppressive. It would be better to live under robber barons than under omnipotent moral busybodies. The robber baron’s cruelty may sometimes sleep, his cupidity may at some point be satiated; but those who torment us for our own good will torment us without end for they do so with the approval of their own conscience.”

As the state expands – even if supposedly for the good of the people – freedoms contract. As Milton Friedman once put it, “Concentrated power is not rendered harmless by the good intentions of those who create it.” And when various policies are undertaken by the state to deal with things like climate change, one must always be very cautious indeed. Mark Steyn was correct to put it this way, “The environment is the biggest pretext for big government ever devised.” 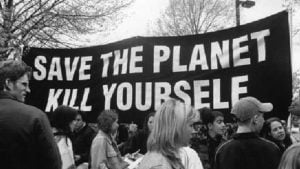 We have seen how so many Western states are reducing freedom and democracy as they take for themselves more and more power in the interests of saving the planet. Indeed, the more hubris a state has when it comes to thinking it can substantially change climate, and the more grandiose promises it makes to do so, the more restrictions on human freedom. This is always how it goes.

The more radical and all-encompassing green policies become, the more harm they can do to individual freedom, to the rule of law, to property rights, and to democracy. And we must not be naïve about how leftists and Marxists are using radical green policies to gain power for the state while taking away our freedoms. I can do no better here than to quote from Greenpeace cofounder Dr Patrick Moore on this:

The collapse of world communism and the fall of the Berlin Wall during the 1980s added to the trend toward extremism. The Cold War was over and the peace movement was largely disbanded. The peace movement had been mainly Western-based and anti-American in its leanings. Many of its members moved into the environmental movement, bringing with them their neo-Marxist, far-left agendas. To a considerable extent the environmental movement was hijacked by political and social activists who learned to use green language to cloak agendas that had more to do with anti-capitalism and anti-globalization than with science or ecology. I remember visiting our Toronto office in 1985 and being surprised at how many of the new recruits were sporting army fatigues and red berets in support of the Sandinistas.

And for those who want to take this further, plenty of books have been documenting all this over the years. Here are just five, of many:

One need not agree with everything said in those books to get the message. And it is not just freedom in the abstract that is under threat here – individuals bear the brunt of this. The truth is, as Green orthodoxy increases, the freedoms of the naysayers decrease.

As but one example, we have the classic case here in Australia of Dr. Peter Ridd, former professor of marine science at James Cook University, who was forced out of his job for daring to question the accepted green narrative. Thankfully after much time, expense and hassle, he was awarded $1.2m in compensation after winning an unfair dismissal case.

But we are all at risk of radical and grandiose statist “solutions” to environmental problems. Prince Michael of Liechtenstein recently made this warning: “Goodbye freedom, democracy and the rule of law”. He writes about climate activism in the European Parliament:

The climate discussion has degenerated into a populist tool to introduce socialist solutions and central bureaucratic planning. Many clearly state that the free market system should be abolished. Lessons from the atrocities and absurdities of the inhumane Soviet system, which collapsed only 30 years ago, are already lost. Citizens are becoming subjects. Individual rights, freedom of speech and opinion, and property rights are being sacrificed. Out of populism, irresponsibility and a lack of courage, parliaments (not only the one in Strasbourg) are betraying their duty to defend the freedom and legitimate interests of citizens – a mission that includes the introduction of real and effective measures to protect the environment. www.gisreportsonline.com/goodbye-freedom-democracy-and-the-rule-of-law,politics,3041.html

Economic costs are just one component of all this. Obviously, we all will pay much more in taxes to fund the grand schemes of green governments. Consider the “Green New Deal” being proposed by Democrats in America. The implementation of this over a period of ten years could range anywhere from 50 to 90 trillion dollars!

One costing of it reveals other massive economic downturns:

How much would just this “bare bones” version of the Green New Deal cost? By 2040, we can expect:
-A peak reduction of more than 1.4 million jobs
-More than $40,000 in lost income for a typical family of four
-An average 12-14 percent increase in household electricity costs
-An aggregate loss of over $3.9 trillion in gross domestic product (GDP)
www.heritage.org/environment/commentary/the-green-new-deal-would-cost-trillions-and-make-not-dimes-worth-difference

One recent article examines seven major ways in which radical green policies cost us dearly. Here is one of them:

5. The trillions of dollars of scarce global resources wasted on global warming hysteria, anti-fossil fuel fanaticism and green energy schemes, properly deployed, could have improved and saved many millions of lives. About two million children below the age of five die from contaminated water every year – about 70 million dead kids since the advent of global warming alarmism. Bjørn Lomborg estimates that a fraction of these squandered green energy funds could have put clean water and sanitation systems into every community in the world.

Waste of funds and loss of opportunity due to global warming alarmism and green energy nonsense have harmed people around the world. In North America, Europe and Australia, trillions of dollars have been wasted on grid-connected green energy schemes that have increased energy costs, increased winter mortality, and reduced the stability of electrical grids.

In the developing world, the installation of electrical energy grids has been stalled for decades due to false global warming alarmism. In the winter of 2017-2018, England and Wales experienced over 50,000 excess winter deaths (more deaths in the winter months than non-winter). That British per-capita excess winter death rate was three times the average excess winter death rate of the USA and Canada. Energy costs are much higher in Britain, due to radical green opposition in the UK to the fracking of gassy shales. wattsupwiththat.com/2019/07/04/the-cost-to-society-of-radical-environmentalism/

Yes, by all means we should care for the environment. And there are many things individuals can do. But mega-plans by governments to save the earth are often more about control and the acquisition of power than about actually helping the planet.

But we must not be naive here. An increase in the power of the state – even if for ostensibly good things, and for our good – of necessity means the diminution of our freedoms. Yes, life is always a trade off, and cost-benefit analyses for things like the care of the environment are needed.

But radically undermining our freedoms for grandiose green policies which will likely do no good at all – or may in fact be counterproductive – is not the way forward. And allowing concerns about the environment to become a tool for radical leftists and Marxists helps no one.

To conclude, let me quote from a former Australian Greens MP who recently penned an article on his experiences. His opening and closing words are worth running with here:

When I ripped up my Greens membership in December last year I labelled the NSW Greens “rotten, corrupt and toxic”. What surprised me most in the days and weeks that followed is that no one from the Greens actually denied it…

I still believe that there is an important place for ecology in politics, and a need for that to be represented in NSW. Green politics should provide interesting solutions to many modern problems, but it can not if it is subsumed by old fashioned Marxism spitting out inane slogans and tired manifestos. www.crikey.com.au/2019/02/26/nsw-greens-buckingham/