There is plenty of media spin on the climate wars:

Over the course of quite a few years I had a major involvement with the mainstream media, with many hundreds of interviews and the like. Because the MSM tends to be secular left, while I am a conservative and a Christian, it was often a rather tumultuous relationship.

With so much interaction with these folks, I quickly began to learn the various tricks of the trade. I learned how they seek to frame the agenda, push various causes, demonise opponents, misrepresent what you have to say, tear things out of context, and make you seem like a relic of the past. 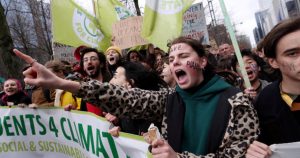 All that of course is what we would expect from the MSM. What we do not expect is when the Christian media does some of the same. But sadly there are plenty of examples of this in fact happening. And often it comes from the religious left as they seek to discredit or repudiate those Christians who dare to not follow the usual leftist line on things.

I often ignore such folks, but when you are publicly focused on and misrepresented in order to push a narrative or sell a story, then sometimes it is worthwhile responding and seeking to set the record straight. A recent piece in an Australian Christian magazine is a case in point: www.eternitynews.com.au/opinion/now-is-the-perfect-time-to-talk-about-climate-change/

The piece was on the environment, and how Christian leaders are getting on board the climate change bandwagon – except for a few reprobate dinosaurs like myself evidently. It was a two-part piece. One gal wrote the main article, which interviewed “ecotheologian” Mick Pope, a proud member of the leftist Red Letter Christians group that includes Tony Campolo, Jim Wallis and Brian McLaren.

The usual spin of the climate alarmists is presented there, including this line: “If we fail to change our approach to climate change, Pope – along with other experts – expects temperatures to continue to rise around four degrees Celsius by the end of the century.” Never mind all the other experts who do NOT believe this to be the case, and have made a solid argument as to why that is so.

And then the editor did a follow-up article supposedly looking at conservative Christians and their views on such matters. He tried to make the case that even conservatives are starting to join the chorus, but that I am the last troglodyte who is still resisting this new Christian consensus!

He writes, “Eternity has noticed that there are fewer and fewer Christian leaders in Australia willing to speak against climate change.” Um, guess what? One can say exactly the same thing about so many other key issues of the day:

-Eternity has noticed that there are fewer and fewer Christian leaders in Australia willing to speak against homosexual marriage.

-Eternity has noticed that there are fewer and fewer Christian leaders in Australia willing to speak against abortion on demand.

-Eternity has noticed that there are fewer and fewer Christian leaders in Australia willing to speak against creeping sharia.

Since when does having a lot of leaders agreeing to something mean it is in line with Scripture? Running with whatever is the latest trend that the world is pushing is usually what so many church leaders will get on board with. Many want to be seen as being with it and cool. Few want to rock the boat and go against the grain of what is currently fashionable.

The editor quotes one conservative Christian, David Robertson, as someone who is more ‘moderate’. But his views are essentially my views. Yet the editor tried to pit him against me, saying this: “The strict denialist view is still represented by blogger Bill Muehlenberg but it has become clear that in Australia, conservative Christianity is not rusted on to the denialist camp.”

Oh good grief. Like I say, this is the sort of treatment I routinely got from hostile secular media folks. That is one thing, but when those claiming to be Christian engage in the same unedifying and un-Christlike silliness, that is very disappointing indeed. In fact, notice all the pejorative language found throughout this one short sentence.

First, I am called a conservative (horror of horrors). But was Pope called a leftist (which he most certainly is)? Not at all. He is just presented as a great Christian voice on this, one who rejects those extreme conservatives such as myself. And I am also called a “strict denialist”. That is a fave leftist way of putting someone in the same category as those who deny the Holocaust.

And then to really thrust the knife in and twist it, I am “rusted on” to this. Wow, I really am an old crusty, rusty dinosaur that we all should ignore – or lock up for my own safety. Hmm, feel the Christian love here! And talk about bearing false witness!

Given that there are over 5000 articles on my site, with at least a hundred of them on the environment, had this editor bothered to read most of these first before writing what he did, he would have found a different take on things. I have said repeatedly in those pieces that yes, humans will have SOME impact on the climate, and of course Christians have a responsibility to be good stewards of planet earth.

And had he actually quoted from me instead of just stereotyping me, then all of his readers could have seen where I REALLY stand on this issue. Since I suspect that 99 per cent of his readers will not click on the link that he provided, let me show folks what in fact I said there, in part:

As to Christian considerations about the environment, a few bullet points can be offered here:

-God has given us dominion over the earth (Genesis 1:28).
-God wants us to be good stewards of the world that he created.
-Because of the entrance of sin into the world, God has pronounced a curse upon the earth (Genesis 3:14-19). This in large measure explains what we are up against.
-Our environmental issues are at root a moral problem – due to human sin – and not something to be fully resolved simply by scientific, technological or economic means.
-While we must care for this planet, we are not to worship creation, but only the creator.
-Undue emphasis and exaggerated concern about the environment can easily lead to idolatry if we are not careful.
-We will one day be living in a new heavens and a new earth, so we must take care of what God has given us.
-Christians can and do differ on the science of climate change, so we need to listen carefully and prayerfully to what is being said, making up our minds based on the evidence, not on emotional alarmism.
-Biblically informed scientific evidence, rather than emotive outbursts from children or movie stars, should be what guides us here.
-Panic over an imminent end of the world or mass extinction is not compatible with the biblical truth that God is in control, and that the end of this world will not occur until God brings it about according to his own purposes and plans.
-Belief in God’s controlling hand over this world does not mean we are fatalists who do nothing. Christians are to responsibly use sensible means to help care for the environment.
-As always, there is an interplay of divine sovereignty and human responsibility that takes place here. billmuehlenberg.com/2019/10/19/christians-climate-and-catastrophism/

I would think that this is a quite balanced and biblically-faithful thing to say – something almost all Christians except those on the far left would fully endorse and go along with. Indeed, I might be biased, but I would have thought that the entire article is fully consistent with biblical teaching and has nothing to do with any sort of extremism.

But just like the mainstream media which always likes to find a bogeyman to attack, and to become the foil for all the “good guys,” it seems that is what we have here with this magazine. They needed someone that they could sink their arrows into as they make themselves out to be the voice of reason and Christian moderation.

Of course it is always easier to take pot shots than to engage seriously with contrary points of view. Because I have dared to join with the tens of thousands of scientists and others who question anthropogenic global warming and the various statist solutions which will radically limit human freedom while doing next to nothing about global temperatures, these folks want to pigeonhole me as an evil denialist, which puts me in the same camp as child-molesters.

It seems that simply running with pejorative terms, misrepresenting those they disagree with, and bearing false witness is how woke progressive Christians prefer to operate here. What a shame. As I say, I fully expect the hostile secular left MSM to routinely do this. I do not expect those claiming to represent Christ to do this.

Which is why I keep saying that CultureWatch and other alternative media sites need to exist. You will NOT get a fair hearing in the secular MSM, and tragically that can sometimes be the case with some Christian media outlets as well.

48 Replies to “Climate Change, the Media, and Culture Wars”