This new volume is certainly worth getting:

This is the ninth and newest volume in the excellent series, Foundations of Evangelical Theology, edited by John Feinberg. This is a first-class set of books on evangelical systematic theology. The first volume on salvation by Bruce Demarest came out in 1997, and the series has been going strong ever since.

This is actually Cole’s second volume in this series, the first being his 2007 book on the doctrine of the Holy Spirit, He Who Gives Life. In this volume Cole, an Anglican minister who has taught theology in Australia and America, looks at an often-neglected area of biblical doctrine, The Doctrine of Angels, Satan, and Demons, as the subtitle put it. 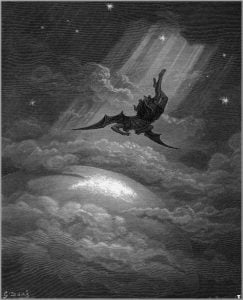 While there are various books that can be found on spiritual warfare and the like, there are not all that many scholarly and theologically rigorous book-length treatments on these topics. One thinks of Michael Green’s 1981 book, I Believe in Satan’s Downfall as a similar sort of work.

Here a whole range of important – and often controversial questions – about a wide range of matters are dealt with, such as:

-where did angels come from?
-what do angels do?
-who is Satan?
-what are we to make of exorcisms?
-what role do demons have in the life of the believer?
-what about archangels?

Plenty of questions arise here, and Cole does a great job of not just raising numerous questions like this, but answering them carefully and biblically as well. Indeed, all the bases are pretty well covered here, with various options presented on some of the more controversial matters, and theological reasons offered for the position Cole leans to.

Consider the hot-potato issue of whether the believer can be possessed by demons. Cole says that Christians can certainly be hindered by demons, and oppressed by demons (that is, caused mental and physical distress). Paul for example was certainly harassed by Satan with a thorn in the flesh (although allowed by God).

But Cole reminds us that there are no examples in Scripture of believers being possessed by the demonic. Since our bodies are the temple of the Holy Spirit, this would not seem to be possible anyway. But he does not absolutely rule this out, and instead offers a more cautious conclusion: “It seems extremely doubtful to me that such a possession can happen.”

In his chapter on spiritual warfare he looks at various ways we should understand just what it is and how it works, and then he presents three key assurances: first, there is no divine condemnation; second, nothing can separate us from Christ; and three, being in Christ, we have overcome the evil powers.

He also offers a number of practical principles and realities when it comes to spiritual warfare, including: there is a real cosmic spiritual battle taking place that we are involved in; in these battles we must be alert and at the ready; wearing and using the full armour of God is essential; and we must be aware of how the enemy can make an entry into our lives, such as through lack of forgiveness.

Cole deals with the issue of angels – both good and bad – in various ways. For example, he looks at how the New Age movement thinks about them, as well as the place of angels in Islam. But he mainly examines the biblical data about angels. His summation is helpful:

“Angels are active creatures, whether they are the angels of heaven or the angels of earth. They worship the Creator, guard the sacred, bridge heaven and earth, guide God’s people, communicate the law, deliver and interpret messages, direct human agents, care for believers, reconnoitre the terrestrial sphere, administer judgment, and above all, serve the Lord Christ. They influence individuals and nations.”

As to fallen angels, he discusses the minority view promoted by some that demons are not fallen angels. But he stands with the mainstream view that this is the closest that we find as to the biblical data on demons. Demons “are fallen angels who are now malicious spiritual beings.”

But they still have some characteristics of unfallen angels: they are personal beings with speech capabilities who can refer to themselves as “us” or “I”. They are intelligent and can express some emotions, such as fear. But they are not like the unfallen angels in terms of their character (holiness).

As to Satan, his origin and fall is shrouded in biblical mystery. We just do not know all that much about how and why he fell. But Cole rightly writes: “One might say that, as an angel, Satan was created by God, but as a fallen angel, as Satan, he is self-made.”

He is mentioned relatively few times in the Old Testament, but in the New we find his presence everywhere, especially in the gospels where he and the demons confront Jesus. “In the flow of redemptive history, it is striking how little Satan figures in the old covenant story in contrast to how much he rises to prominence in the new covenant one.”

This summary statement by Cole nicely covers the biblical data on him:

Consider lastly his take on the end times and the end of Satan. Various millennial views and their scriptural support are discussed in relation to this matter. Some hold that the first coming of Christ effectively resulted in the binding of Satan, while others look to a future binding: “Each of the positions hitherto discussed affirm the binding of Satan. The key difference lies in the when. Only historic premillennialism and dispensationalism make the binding of Satan a future event.”

He also looks at a question some have asked from time to time: will Satan one day be restored? Some of the early church fathers actually suggested this, such as Clement of Alexandria and Origen. But the biblical data – especially Revelation 20:10 – seems clear, and the answer is no.

All in all this is a very good treatment indeed of a number of key biblical themes that run throughout Scripture. Cole covers a lot of territory here, and he fairly and judiciously assesses various points of view in the light of the biblical and theological truth. A welcome addition to this excellent series.

(Australians will find this volume at Koorong: www.koorong.com/product/against-the-darkness-the-doctrine-of-angels-satan_9781433533150?ref=https%3A%2F%2Fwww.koorong.com%2F )

One Reply to “A Review of Against the Darkness. By Graham Cole.”