Sadly another public figure dumps his faith in Christ:

Apostasy is always so easy. To veer off into unbelief or heresy happens all the time, and it seems to be something that can take place so effortlessly. However, remaining orthodox and faithful to Christ and his word does require some effort on our part (and a lot of God’s grace). As G. K. Chesterton once put it in his book Orthodoxy:

It is easy to be a madman: it is easy to be a heretic. It is always easy to let the age have its head; the difficult thing is to keep one’s own. It is always easy to be a modernist; as it is easy to be a snob. To have fallen into any of those open traps of error and exaggeration which fashion after fashion and sect after sect set along the historic path of Christendom – that would indeed have been simple. It is always simple to fall; there are an infinity of angles at which one falls, only one at which one stands. To have fallen into any one of the fads from Gnosticism to Christian Science would indeed have been obvious and tame. But to have avoided them all has been one whirling adventure; and in my vision the heavenly chariot flies thundering through the ages, the dull heresies sprawling and prostrate, the wild truth reeling but erect.

A few days ago I wrote about someone who abandoned his faith – or at least his church upbringing – to enjoy his particular sin, which happened to be homosexuality. Now we learn of another much more famous person who once publicly celebrated his Christian faith, but who has now renounced it. 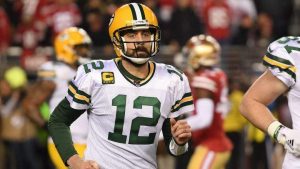 I refer to the Green Bay Packers’ star quarterback, Aaron Rodgers. If you are not into American football his name may not mean much. But since I am a Wisconsin boy, I do know a bit about him. The 36-year-old joined the Packers in 2005 and is still with them. Highlights of his career would include winning the Super Bowl in 2010, and twice being named the NFL Most Valuable Player (2011, 2014).

But for Christians, he was also known for his faith. He grew up in a Christian home and once was open about his Christianity. But over the years he has had second thoughts, and now he has basically thrown it all away. And we have clear clues as to why he did.

For example, an article from 2017 speaks of how he moved away from biblical Christianity in good part because of being exposed to the works of former Christian pastor turned apostate, heretic and New Age guru, Rob Bell. He had already been questioning much of his faith, but Bell helped to seal his defection:

He started reading books that delved into alternate interpretations of theology. Then, not long after he became the starter in Green Bay in 2008, he met Rob Bell, a young pastor from Michigan whom the Packers invited to speak to the team. When the talk ended, Rodgers waited for the group to dissipate and then introduced himself to Bell, best known for his progressive views on Christianity. The two men struck up a friendship. Bell sent Rodgers books on everything from religion to art theory to quantum physics, and the quarterback gave him feedback on his writing. Over time, as he read more, Rodgers grew increasingly convinced that the beliefs he had internalized growing up were wrong, that spirituality could be far more inclusive and less literal than he had been taught. As an example, he points to Bell’s research into the concept of hell. If you close-read the language in the Bible, Rodgers tells me, it’s clear that the words are intended to evoke an analogy for man’s separation from God. “It wasn’t a fiery pit idea – that [concept] was handed down in the 1700s by the Puritans and influenced Western culture,” he says. www.espn.com/espn/feature/story/_/page/enterpriseRodgers/green-bay-packers-qb-aaron-rodgers-unmasked-searching

And in an article from a few days ago we have this headline: “Aaron Rodgers Reveals Strong Thoughts Against Christianity.” The article features a 5-minute video interview with his girlfriend on why he has moved away from orthodox Christianity. heavy.com/sports/2020/01/green-bay-packers-aaron-rodgers-atheist-religion-christianity-danica-patrick/

I started questioning things, and had friends with other beliefs and enjoyed learning. . . I had some good friendships along the way to help me figure out exactly what I wanted to believe in. Ultimately, it was that rules and regulations and binary systems don’t really resonate with me. You know, enjoyed learning about other religions, met the Dalia Lama. Its been a fun path to a different type of spirituality which to me has been more meaningful…

Some people just need structure and they need tradition and stuff and that works for them. I don’t have a problem with it – it doesn’t resonate with me…

Its very black and white, binary… Religion can be a crutch. It can be something people have to have to make themselves feel better. And because its binary, it’s us and them, it’s saved and unsaved, it’s heaven and hell, it’s enlightened and heathen, it’s holy and righteous, and sinner and filthy. And that makes a lot of people feel better about themselves: ‘Oh, I got Jesus and I’m saved and I’m going to heaven and there’s only 144,000 of us going, even though there’s 7 billion people on the planet.’ You know, I don’t know how you can believe in a God who wants to condemn most of the planet to a fiery hell. Like what type of loving, sensitive, omnipresent, omnipotent being wants to condemn most of his beautiful creation to a fiery hell at the end of all this?

Oh dear. There is so much that needs to be addressed here. Let’s back up and see where and why some of the rot may have started to set in. Rob Bell, the former megachurch pastor, is obviously a big part of this rejection of Christianity. Bell has written books that deny the reality of hell, that claim we all will end up being saved, and so on. Bell even left the pastorate and became great buddies with New Agers like Oprah Winfrey. See some of my articles here: billmuehlenberg.com/2015/02/19/the-appalling-apostasy-of-rob-bell/

And contrary to the patently false claims of Bell, it is Jesus who spoke more about hell, judgment and wrath to come than any other person in Scripture. These fundamental biblical teachings are NOT some recent Puritan invention. They are fully part and parcel of the revelation of God.

But it seems that Rodgers has bought into Bell’s whole package of heresy. Indeed, get a load of his use of the term “binary”. We of course hear this all the time with the gender bender activists: ‘Sex is not binary (male and female) – there are as many sexes as you want to have.’ Now we have it being used of God and the Bible.

Um yes, you bet your boots: the Bible is the most binary book around. From Genesis to Revelation it does indeed teach a binary reality about mankind: you are either one of God’s own people or you are not. All the things Rodgers no longer believes in are still 100 per cent true. There are either the saved or the lost; heaven or hell; truth or error; right or wrong; God or the devil.

And there are most certainly two and only two types of humanity: either you are right with God through Christ or you are not. But I discuss this in much greater detail here: billmuehlenberg.com/2017/06/07/two-humanities-two-destinies/

As to his claim that God is sending most folks to hell, he should start reading his Bible again instead of listening to all the heretics and apostates out there. People send themselves to hell. God has done all he can to rescue lost sinners. He paid the ultimate price of sending his only Son so that we can avoid a godless eternity.

But there is only one way that we can avail ourselves of that: by faith and repentance, clutching on to the finished work of Christ. And only a few nutter cults have ever taught that only 144,000 people will be saved out of all of mankind. That number – found only in Revelation 7:1-8 and 14:1-5 – has to do with the 12 tribes of Israel.

And as we read in the very next verse (Rev. 7:9) there is “a great multitude that no one could count, from every nation, tribe, people and language, standing before the throne and before the Lamb.” So Rodgers sure has things screwed up here. But distorting Scripture is always what those who want to give God the flick resort to.

They make up all these lame objections as to why they cannot possibly be a Christian anymore. Never mind that every single one of these criticisms and objections has been carefully answered time and time again over the past two millennia.

Making excuses for turning your back on the God of the Bible happens all the time. And of course the problem is NOT intellectual or theological as I just mentioned. The real problem is moral. Apostates simply prefer sin and self over obeying and following God and his word.

It is the same thing that we found with our first parents: they wanted to be like God, they wanted autonomy, they wanted to call the shots. They too felt that “rules and regulations and binary systems” don’t resonate with them. And it has been that way ever since. This is simply about sinners making excuses for their sin, and offering up pathetic excuses about why they reject the very God who created them.

As is always the case in these sorts of situations, we need to pray for Aaron Rodgers. We need to pray that he returns to the faith he once had – or at least once knew about. He needs to be set free from the deception and lies of Satan he has allowed himself to be trapped in. And he needs to get off the highway to the hell that he no longer believes in.