Thousands of child sex abuse cases in the Scouts. Should we be surprised?

Over a century ago Englishman Robert Baden-Powell founded the Boy Scouts, and with his sister, the Girl Guides. These groups were set up to instil in young people strong religious and moral values. But today that is all gone. And the process of deterioration is worth recounting here. 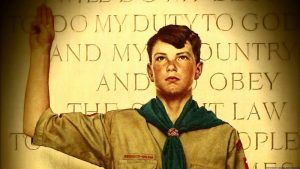 First, consider the roots. The religious nature of these groups is found in the old Guide Promise:
“I promise that I will do my best:
To do my duty to God, to serve the Queen and my country;
To help other people; and
To keep the Guide Law.”

And near the end of his life Baden-Powell said this in a letter:

I have had a most happy life and I want each one of you to have a happy life too. I believe that God put us in this jolly world to be happy and enjoy life. Happiness does not come from being rich, nor merely being successful in your career, nor by self-indulgence. One step towards happiness is to make yourself healthy and strong while you are a boy, so that you can be useful and so you can enjoy life when you are a man. Nature study will show you how full of beautiful and wonderful things God has made the world for you to enjoy.

But now all this is no more. We have just learned that in the US the Boy Scouts are filing for bankruptcy. Why? Because of all the lawsuits over sexual abuse. As one report states: “More than 12,000 Boy Scout members have been victims of childhood sexual abuse at the hands of 7,819 allegedly sexually abusive troop leaders and volunteers, according to an analysis of long-held records in the organization known as the ‘perversion files’.” www.christianpost.com/news/boys-scouts-file-for-bankruptcy-creates-fund-to-equitably-compensate-sex-abuse-victims.html

No surprises here. When you throw out God and morality, and push all forms of sexual immorality, we should fully expect these sorts of things to be happening. And I have been documenting this for some years now. Back in June of 2011 I penned a piece, “Targeting and Recruiting Children.” In it I said this:

A well known saying affirms that the hand that rocks the cradle rules the world. Homosexual activists know this all too well. As one lesbian put it, “Whoever captures the kids owns the future”. Thus we find the constant attempts by homosexual activists to influence children.

There have been many such attempts lately to get access to young people. For example, in the United States the New Jersey Supreme Court has ordered the Boy Scouts to admit homosexuals. The Girl Scouts have also caved into Political Correctness. Indeed, according to some Scout staffers, one in three of the Girl Scouts’ paid professional staff is lesbian. And in the United Kingdom, the English Scout Association recently lifted the ban on homosexuals becoming troop leaders. billmuehlenberg.com/2011/06/13/targeting-and-recruiting-children/

In July of 2012 I wrote about “Depriving Children of Faith and Absolutes,” saying in part:

Many would have seen the news item of a few days ago describing a radical change to the Girl Guides. They are dumping God and Queen for some reason, and basically renouncing the very foundation of the group. In the name of trendiness, openness and relativism it seems, they have dumped these century-old foundation stones from the organisation….

The new Guide Promise says this:
“I promise that I will do my best:
To be true to myself and develop my beliefs
To serve my community and Australia
And live by the Guide Law.” billmuehlenberg.com/2012/07/09/depriving-children-of-faith-and-absolutes/

One way to kill a person is to aim a gun at his head and pull the trigger. Another way is to sneakily administer slow-working poison, the results of which will be exactly the same. This is true of organisations as well. You can use direct external action to kill off an organisation, or you can work to destroy it from within.

That is exactly what has happened with the Boy Scouts of America. On Thursday 60 percent of the 1,400 delegates at the BSA’s annual convention in Dallas, Texas voted to allow homosexual scouts. It did however keep a ban on homosexual Scout leaders.

Of course they are living in dream land as to the latter decision. In no time we will have activist judges informing them that it is discriminatory to ban homosexual leaders in the Scouts, and they must immediately cease and desist. Mark my words, this will be happening real soon.

The paedophiles of course are licking their lips and are on cloud nine about all this. Groups like the North American Man Boy Love Association have just been handed all their wildest dreams on a silver platter. This is not only the death of the Boy Scouts, but the death of boys. billmuehlenberg.com/2013/05/25/the-death-of-the-boy-scouts/

The perfect storm indeed. Undo everything the founders intended, sit back, and watch what happens. Get rid of God and morality, while allowing the tentacles of the homosexual agenda free rein. Allow homosexuals to be Scouts and Scout leaders – what could go wrong?

Yeah, that one was really hard to predict. So now we have thousands of child sex abuse victims, and an organisation that has zero credibility. And we are all supposed to be surprised at this? Good grief. Let’s put the foxes in the hen house – all in the name of inclusion, diversity and tolerance. That should be fine, right?

A long time ago I was once a Boy Scout. I of course would not dream of advising anyone to join the Scouts today. Alfred Siewers was also once a Scout. Last year he said this:

The old American Boy Scouts might as well be filing for moral bankruptcy, having lost both its base and elite cultural capital. What used to be an organization designed to help boys become men has now been re-fashioned in line with the new gnosticism of American culture, accepting LGTBQIA ideology, while abandoning its traditional ascetic position about sex and its opposition to atheism.

Next year’s World Scouting Jamboree in West Virginia reportedly will be the first hosted by the former Boy Scouts of America to make condoms available to participants. A 2016 agreement with the Unitarian-Universalists overrode the group’s membership requirement of belief in God by allowing belief in humanism, contrary to the Scout Oath. thefederalist.com/2019/01/02/boy-scouts-bankruptcy-not-just-financial-moral/

And two years ago Paul Kengor said this about the left’s war on the Scouts:

The left has succeeded in driving a final nail in the coffin of the Boy Scouts as it once was. The organization is now a shell of its self. It capitulated first on “gay” scout leaders, then on “transgender” scouts, and now on girls joining the Boy Scouts.

The Boy Scouts have been emasculated, neutered. The organization that prided itself on courage stands impotent, fearful in the face of feminists and LGBTQ militants. They’ve cowered to the forces of “diversity” and “tolerance.” And for cultural revolutionaries, the defeat of the Boy Scouts is the end of a long march through yet another institution. spectator.org/the-marxist-progressive-war-on-the-boy-scouts-2/

Everything the radical left gets its hands on it destroys. And that of course is all very deliberate. The destruction of the Scouts is just the latest in a long line of takedowns by the militants. Expect things to get even worse in the days ahead.