Are you a secular leftist or a biblical Christian?

There are certain issues that pretty well define where a person is at, what he believes, and what he values. There are of course various core theological beliefs that one must hold to if one claims to be a Christian. When dealing with basic Christian beliefs in general, you would include things like the deity of Christ, the Trinity, and salvation in Christ alone as some of your litmus tests.

Just in case you are not fully aware of the term, it can have a specific scientific reference, or a broader, more generic one. As to the former, in chemistry it is ‘a test for acidity or alkalinity using litmus’. But it also has the broader usage. Here are three brief online definitions of the latter: 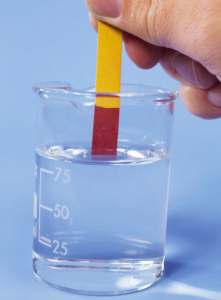 -If you say that something is a litmus test of something, you mean that it is an effective and definite way of proving it or measuring it.

-A litmus test is a question asked of a potential candidate for high office, the answer to which would determine whether the nominating official would proceed with the appointment or nomination.

When it comes to Christianity and the culture wars, we now have some pretty clear litmus tests. When a person promotes certain causes or agendas, that is a good indication of where that person is at. In a very real sense, how a person stands on such issues will serve as a very useful litmus test indeed.

Here I want to narrow things down a bit more and look at just two of the major culture war issues of today. And the secular left also sees these two issues as crucial litmus tests for those who are truly on their side. If that is the case, all the more reason for Christians to also take a stand on these issues, but from the opposite side of the fence.

The two issues of course are abortion and homosexuality. My general rule of thumb is this: those who vigorously push these two issues are simply kidding themselves in thinking they are Christians. Yes, some believers may be promoting these things out of ignorance and the like. But the informed biblical Christian cannot support either.

That case I cannot make here. But in my various books I have sought to carefully and biblically make that case, including my 2011 Strained Relations and my 2015 The Challenge of Abortion. Please consult them for the full story on this. But let me look at these matters a bit more.

Consider abortion. The secular left has of course made abortion on demand their major litmus test. All the American Democrat contenders for the presidential nomination of course hold to this. Bernie Sanders and others in the crowded field of Democrats have all made it clear that if you are not pro-abortion, you should not be in the Party. Sanders has said that “being pro-choice is an absolutely essential part of being a Democrat.”

He also said: “Is there a litmus test for those of us up here? For me there is. I will never nominate any person to the Supreme Court or the federal courts in general who is not 100 percent pro-Roe v. Wade. Number two, we have got to codify Roe v. Wade into legislation. Number three, we have to significantly expand funding for Planned Parenthood.”

The other litmus test of secular left orthodoxy is of course homosexuality. If you dare to express concerns about this, it is a clear indication that you are a fake, and not a real deal leftist. Your credentials as a progressive MUST include the full acceptance and celebration of all things homosexual.

And as I have documented countless times now, those who do not go along with the homosexual agenda WILL be persecuted and prosecuted. Let me give just one clear example of this. Last year I wrote an article about the Finnish Israel Folau, Päivi Räsänen. In it I said this:

“A Christian member of Finland’s parliament is under investigation after she cited the New Testament on social media to voice her objection to the Lutheran church’s participation in an LGBT pride event.” billmuehlenberg.com/2019/09/16/quoting-from-the-bible-will-get-you-into-trouble/

Well, it seems that things are going from bad to worse for her. A new article documents how not only she, but all of genuine Christianity is now at risk in Finland, where homosexuality has become a litmus test for Big Brother Group Think.

The title of the article is ominous enough: “Is Finland About to Make Christianity Illegal? Christian Lawmaker Facing Fines and Prison”. Here is part of that article:

Päivi Räsänen is under two investigations for allegedly defaming or insulting homosexuals. The first after she shared a Bible verse on Twitter last year aimed at Finland’s Lutheran church for promoting the homosexual lifestyle. Räsänen told us, “In my tweet, I directly cited Romans first chapter and verses 24 to 27 and posted the picture of the passages from the Bible.” The passage condemns homosexuality. Finland’s Prosecutor General has now opened a second investigation concerning a pamphlet that Päivi wrote 15 years ago about Biblical Christian marriage, called “Man and woman, He created them.”

It goes on to say this:

Leif Nummela, editor of a Christian newspaper and a Christian TV host in Finland told us, “I thought that this couldn’t happen. It was unbelievable. It was a real surprise. And my first thought was, ‘are they really going this far’?” The Lutheran pastor who published the pamphlet Päivi wrote on Christian marriage is also under investigation.

Finnish Christian broadcaster, author and theologian Pasi Turunen says this has been a rude awakening for many Christians. “Finnish Christians have lived in a very homogeneous Christian culture,” Turunen said. “It’s been very easy because everybody thinks and believes the same way pretty much and now this has become a completely new situation for us when our faith is challenged.”

Päivi said this all began in prayer when she felt led by the Lord to do something to wake up the national church in Finland on the issue of homosexuality. But she now fears this investigation will make them too afraid to proclaim their faith. “I’m worried that this case, the criminal investigation, might frighten some Christians to hide and to keep silent.”

Turunen said, “It raises the threshold of saying anything in the public square and in one way, I see that that’s the purpose of this kind of attack: to put a high price tag on speaking your Christian mind out loud in the society.” If convicted, Päivi could be fined or even imprisoned. And Turunen and Nummela both feel that support for her from Finnish evangelical leaders has been weak. “If we could easily have two hundred thousand Christians saying, ‘this is horrendous, stop persecuting Päivi Räsänen,’ and that would have a huge impact,” Nummela said.

Turunen said he wishes “that evangelical leaders would be more outspoken and bolder. Otherwise, there will come a time when each of us will be in front of the firing squad.” Päivi says she’s not afraid and believes God has a plan in this for Finland. She said, “I am waiting to see what God is doing, because when He raises up prayers, then we can know that He is doing something.”

In sum, there are two clear morals of the story in all this: One, the world which is opposed to God and his Word knows that certain things must be adhered to – or else. And abortion and homosexuality are definitely two of them. It will not sit by quietly and allow anyone to oppose these two sacramental beliefs and core values.

And two, if the world is so clear on this, the church should be as well. Thus if you find someone who claims to be a Christian yet is a gung-ho supporter of abortion on demand or of homosexuality, or both, you have every right to seriously question their bona fides as a true believer.

These two issues are the hallmarks of radical secular leftism. They are NOT the sort of things any biblical Christian can support and champion. Yes, at the end of the day only God knows those who are truly his, but he has given us both doctrinal and behaviour tests by which to assess people and their profession of faith.

And on both levels, those running with the pro-abortion and pro-homosexual agendas clearly fail the tests.